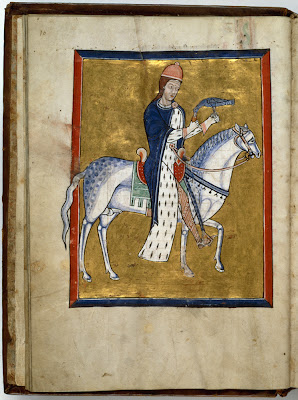 Detail from Psalter
Made in Normandy c. 1180
Parchment
232 x 169mm
National Library of the Netherlands
This is the picture of the month of May, in which a knight on horseback rides out to go hawking. The hawker, draped in ermine, is shown at the moment of taking off the hawk's hood, a rarely depicted detail.

The style with its bright colours and austere outlines, as well as the physiognomy of the falconer's face reveal that the miniature is painted by an artist coming from Normandy or the south of England.

The manuscript was made for an unknown, possibly noble patroness, who had herself portrayed in a kneeling position in a full-page miniature before the beginning of the texts of the psalms.
Posted by Unknown at 11:51 pm