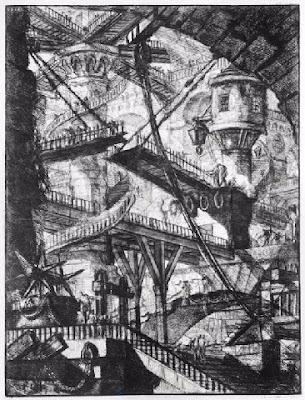 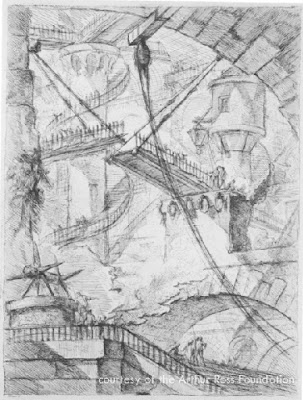 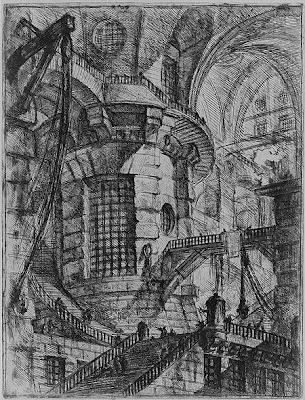 The Carceri d'Invenzione or "Imaginary Prisons," which Piranesi engraved in 1745 are among the most potent dream images ever evoked. They are described on their title page as "capricious inventions."

They derive from stage prisons rather than real ones

Hallucinogenic, obsessional and surreal are adjectives which do not quite convey the power of these images.

Galleries have no exit; unending ramps, staircases and stone voids; scribbled and echoing crypts; vaults and huge iron grilles; swinging cables. All coalesce into a dream and sometimes nightmarish vision of limitless dread, and of imprisonment by infinite space. The Carceri often present pure architectural spaces far from all nature, complex interior halls that seem to be partly ruins, partly unfinished buildings.Horace Walpole noted of Piranesi: “He has imagined scenes that would startle geometry.”

It is perhaps not surprising that Coleridge, Baudelaire, and Thomas de Quincey had a great interest in these works.

The Carceri reveal the scope of his architectural ambitions with a grandiosity that could not have been attained by any of the designs that he actually meant to be built, hampered as they were by reality.

Various reworkings of the Carceri spanned most of Piranesi’s working life. In their second, significantly darker version, the Carceri show close affinities with his etchings of antique ruins. Piranesi reworked these plates and added two new ones to the series. Thereworked plates are darker and more complex, with added details and inscriptions. While it is hard to find meaning in the first state of the series, the second state includes explicit references to the justice system under the Roman Republic and to the cruelty for which certain emperors were known.

Were these an oblique critique of the system of justice which operated in Rome and the Papal States at the time ?
Posted by Unknown at 8:38 pm