Church of the Third Order of St Francis in Ouro Preto 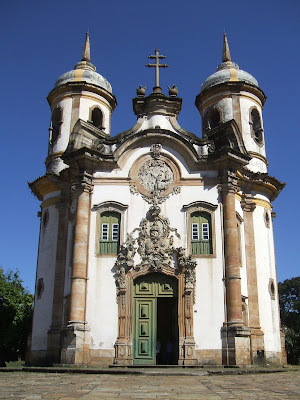 Church of the Third Order of St Francis in Ouro Preto. The façade is the work of Aleijadinho. St. Francis of Assisi Receiving the Stigmata, façade of the St Francis church of Ouro Preto.

Aleijadinho (b. Antônio Francisco Lisboa; 1730 or 1738 – November 18, 1814) first appears as a day laborer working on the Church of Our Lady of Carmel in the town of Ouro Preto, a church designed by his father.

Within a very short time he had become a noted architect himself and had designed and constructed the Chapel of the Third Order of St. Francis of Assisi in Ouro Preto. He had also executed the carvings on the building, the most notable being a round bas-relief depicting St. Francis receiving the stigmata.

It was shortly thereafter that the signs of a debilitating disease, probably leprosy, began to show and not long after that Antonio received the name by which he has come down through history, O Aleijadinho, "Little Cripple."
Posted by Unknown at 7:32 pm