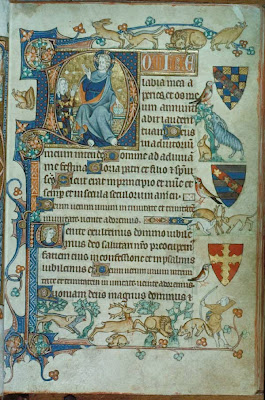 The Grey-Fitzpayn hours are so-called because, on the basis of the heraldry in the MS, it is believed to have been made in honour of the wedding of Richard Grey and Joan Fitzpayn which probably took place in the period 1300-1308.

The margins are filled with a profusion of creatures, often juxtaposed without any narrative or logical, or natural scale relationship. There are also frequent representations of Joan Ftizpayn and Richard Grey kneeling in prayer.

In this image, in the initial, Joan Fitzpayn kneels in prayer before the enthroned Christ who is holding an orb.

The borders show a marvellous collection of animals, birds, and heraldry, including (clockwise from the left of the initial): a squirrel, dogs chasing a rabbit, a dozing lion, a boar, a goat nibbling leaves, a seated rabbit, two dogs harrying a stag. In the bottom margin there is a lively hunting scene.

The arrow of the bowman to the right has found its mark in the neck of the stag who is bounding over a rabbit as it is chased rightwards by the two dogs to the left.

Between the archer and the stag, a lion and a fox eye each other closely.
Posted by Unknown at 5:53 pm