Vision of the Dove 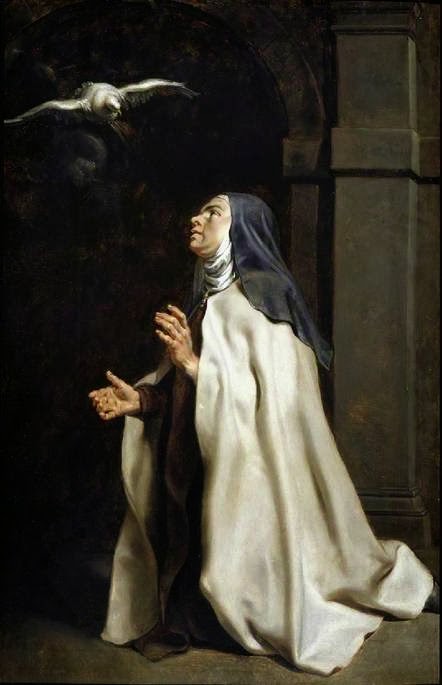 
Rubens  was all his life a devout practicing Catholic. As ambassador to the court of Philip IV, he was always in close contact with  Spain.

It is not what we would call an "action" painting

It is the painting of a vision Baroque style

The popularity of her works was astounding. They even reached Reformed England shortly after they were written

Another version by Rubens  of the Vision of the Dove is in the Museum Boijmans Van Beuningen in Rotterdam. It can be seen here 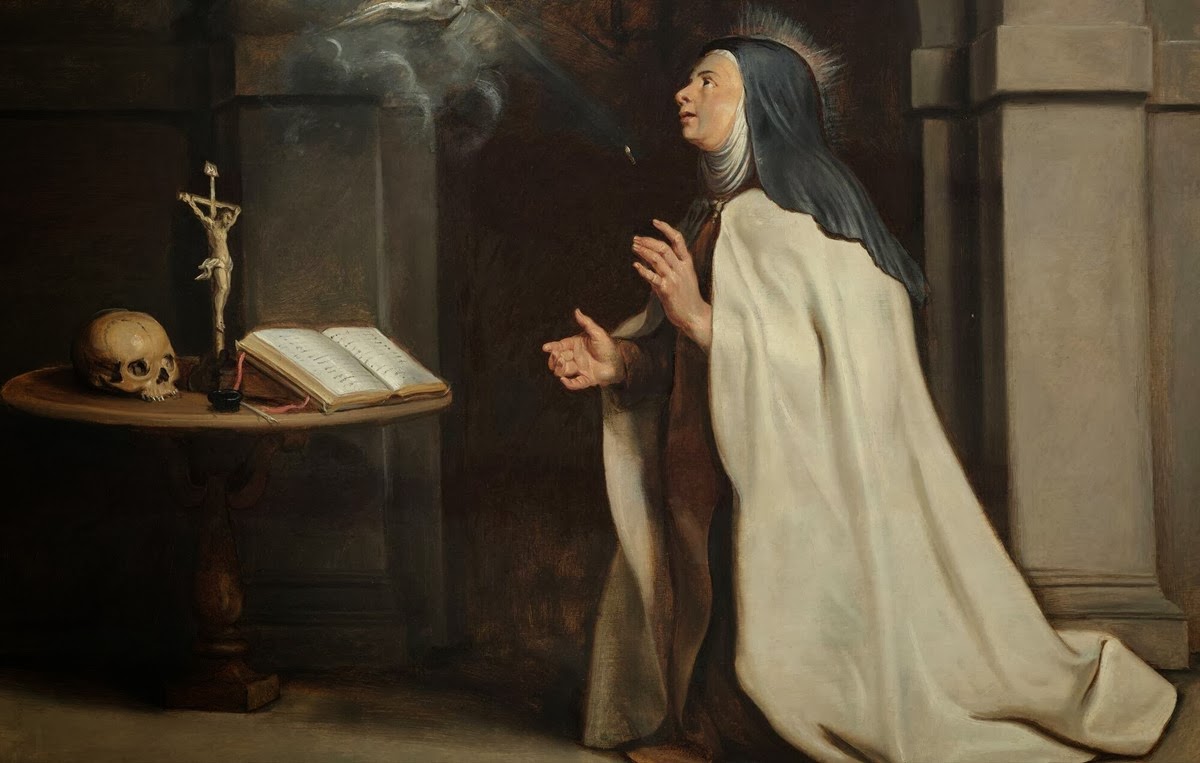 Unlike representations of Doctors and Fathers of the Church, the dove representing the Holy Spirit  does not allude to any claim on Saint Teresa's part to divine inspiration.

Her works although popular and respected were not regarded as on the same level as the Fathers and Doctors.

She was only made a Doctor of the Church in 1970

You will note that the dove in the Fitzwilliam Museum does not really look like a dove. And in the painting in Rotterdam the dove is not wholly depicted

She described the vision thus:

"One day-it was the vigil of Pentecost-I went, after Mass, to a very solitary spot, where I used often to say my prayers, and began to read about this festival in the Carthusian's Life of Christ.

As I read about the signs by which beginners, proficients, and the perfect may know if the Holy Spirit is with them, it seemed to me, when I had read about these three states, that by the goodness of God, and so far as I could understand, He was certainly with me then....

While I was meditating in this way a strong impulse seized me without my realising why.

It seemed as if my soul were about to leave my body, because it could no longer contain itself and was incapable of waiting for so great a blessing....

I had to seek some physical support, for so completely did my natural strength fail me that I could not even remain seated.

While in this condition, I saw a dove over my head, very different from those we see on earth, for it had not feathers like theirs but its wings were made of little shells which emitted a great brilliance.

It was larger than a dove; I seemed to hear the rustling of its wings. It must have been fluttering like this for the space of an Ave Maria.

But my soul was in such a state that, as it became lost to itself, it also lost sight of the dove."

The English convert poet Richard Crashaw 1612–1649  had a great devotion to St Teresa. He composed three poems in honour of her: "A Hymn to Sainte Teresa," "An Apologie for the fore-going Hymne," and "The Flaming Heart"

Some saw her as this great indomitable passionate figure, a colossus, an eagle soaring over the spiritual plains

She was of course more than this, as Crashaw said in his poem. She was both eagle and dove, and simply like the Love who resided in her heart:

"O thou undaunted daughter of desires!
By all thy dower of lights and fires;
By all the eagle in thee, all the dove;
By all thy lives and deaths of love;
Let me so read thy life, that I
Unto all life of mine may die."

But the Love which she had was combined with purification,  maturity and renunciation

That is the Love which Crashaw  extols

Like St Teresa, Crashaw had a deep prayer life. Like her writings, his poems had a very serious purpose

"he offered more prayers in the night, then others usually offer in the day; There, he penned these Poems, Stepps for happy soules to climb heaven by."

And that is why T.S. Eliot rated Crashaw’s overall poetic performance above the two esteemed romantics, Keats and Shelley.