The Good Samaritan in Rome 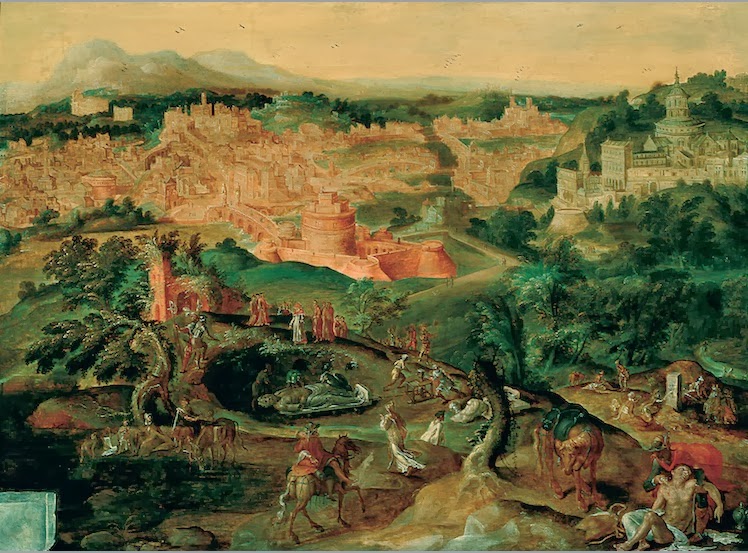 
Heemskerck presents an unusual rendition of the parable in Luke 10:29–37

A traveller is beaten and robbed by bandits who leave him for dead on the road. A priest and a Levite pass by without stopping.

Only a Samaritan, a people the Jews regarded as ungodly, came to help him.

But the setting is not the Jericho-Jerusalem highway, it is on the outskirts of Rome in the sixteenth century

Heemskerck was a pupil or assistant of Jan van Scorel,  from whom he learnt an Italianate style.

His understanding of Italian and ancient art was intensified by a visit to Rome in 1532-6, when he recorded the monuments of the city in a series of famous drawings.

The context of his visit to Rome is important. It was after the Sack of Rome in 1527 when the Emperor`s troops had ransacked the city slaughtering thousands.

Clement VII was in the last years of his reign which had been a disaster for the Papal States as well as the Catholic Church. He was a broken reed

Law and order had broken down.

He was to convene the Council of Trent in 1545

The imperative was peace between the Emperor and the King of France. There was a 10 year truce. Religious reform was also required

In his reign he was to encourage and support the Capuchins, Barnabites, Theatines, Jesuits, Ursulines, and many religious orders

It seemed to be a religious renaissance

However Paul III was followed by Julius III (reigned 7 February 1550 to his death in 1555), a compromise candidate who was weak and pusillanimous and whose administration was racked by scandal

This was seen in the Holy Father`s recent message for World Communications Day:

"What does it mean for us, as disciples of the Lord, to encounter others in the light of the Gospel?  In spite of our own limitations and sinfulness, how do we draw truly close to one another?

These questions are summed up in what a scribe – a communicator – once asked Jesus: “And who is my neighbour?” (Lk 10:29).  This question can help us to see communication in terms of “neighbourliness”.

We might paraphrase the question in this way: How can we be “neighbourly” in our use of the communications media and in the new environment created by digital technology?

I find an answer in the parable of the Good Samaritan, which is also a parable about communication.  Those who communicate, in effect, become neighbours.

The Good Samaritan not only draws nearer to the man he finds half dead on the side of the road; he takes responsibility for him.  Jesus shifts our understanding: it is not just about seeing the other as someone like myself, but of the ability to make myself like the other.

Communication is really about realizing that we are all human beings, children of God.  I like seeing this power of communication as “neighbourliness”.

Whenever communication is primarily aimed at promoting consumption or manipulating others, we are dealing with a form of violent aggression like that suffered by the man in the parable, who was beaten by robbers and left abandoned on the road.  The Levite and the priest do not regard him as a neighbour, but as a stranger to be kept at a distance.

In those days, it was rules of ritual purity which conditioned their response.  Nowadays there is a danger that certain media so condition our responses that we fail to see our real neighbour.

It is not enough to be passersby on the digital highways, simply “connected”; connections need to grow into true encounters. "