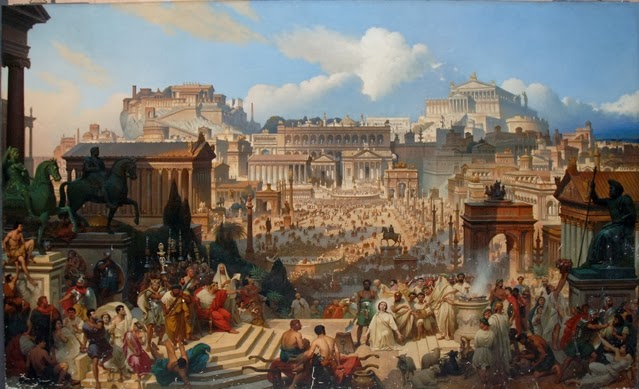 
The scale of the massive work can be seen from the following image:

The exact title of the work is: Martyrdom of Saint Agnes in the Roman Forum, in the Year 303, under Diocletian

The martyrdom is really subordinate to the study of Imperial Rome

Last year the work was the subject of a number of news articles after it was reported that the French President, M François Hollande, had declined to deliver a speech for the opening of an arts festival in front of the painting and when it could not be moved that it was covered by a blue sheet

In fact he cancelled the visit for some unexplained reason. Vatican Insider also picked up the story

Some said that it was because of its religious subject. Others simply that the glare from the painting would cause problems for the photographers and cameramen who would be there to record the event. Others that he had simply good taste

St Ambrose in his panegyric explained why this young girl was such a great force in her time:

"A new kind of martyrdom!

Not yet of fit age for punishment but already ripe for victory, difficult to contend with but easy to be crowned, she filled the office of teaching valour while having the disadvantage of youth. She would not as a bride so hasten to the couch, as being a virgin she joyfully went to the place of punishment with hurrying step, her head not adorned with plaited hair, but with Christ.

All wept, she alone was without a tear.

All wondered that she was so readily prodigal of her life, which she had not yet enjoyed, and now gave up as though she had gone through it.

Every one was astounded that there was now one to bear witness to the Godhead, who as yet could not, because of her age, dispose of herself.

And she brought it to pass that she should be believed concerning God, whose evidence concerning man would not be accepted.

"As an alternative to the many things we could own, the Lord offers the one thing that is essential: to leave everything for love and to follow him: "Come, follow me" (Mk 10:21).

The virgin and martyr Agnes responded with total generosity and an undivided heart to Christ's invitation: she made her own existence an "eloquent and attractive example of a life completely transfigured by the splendour of moral truth" (cf. Veritatis splendor, n. 93).

Because of this, she herself was able to brighten "every period of history by reawakening its moral sense" (ibid.).

Her example encouraged many believers over the centuries to follow in her footsteps."