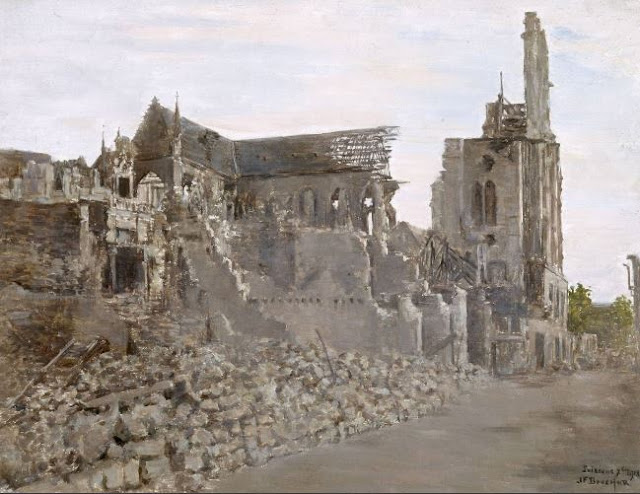 
Next year is the centenary of the outbreak of the First World War. States are making arrangements for its commemoration

Broadly it was the first popular "Total War". Life on this planet has never been the same afterwards even among states which were non-combatants.

Whether we are conscious of it or not, we are still affected by it and its aftermath

In "Les ravages de la guerre 1914-18", Alain Galoin provides the context for the images above which in many ways sum up the effect of that War on religion

What happened at Reims and Soissons were no accidents.

Reims was under bombardment for three and a half years. It was first set alight in 1914 by enemy bombarment. By the end of the conflict it was 90% destroyed along with the rest of that great historical city

Soissons was also subject to this type of treatment. The cathedral was literally cut in half.

It was only due to the efforts of Myron T. Herrick, the American ambassador to France, John Davison Rockefeller (1839-1937) and the State of Denmark that after the war, reconstruction of the cathedral was completed within 10 years

But Total War  did not come out of nowhere.

In a recent review of Emile Simpson’s War From the Ground Up, Michael Howard  in the Times Literary Supplement writes:

"Clausewitz saw that the limited wars of the eighteenth century on which he had been brought up had been transformed into the total wars of the Napoleonic era – and all subsequent eras – not by any change in the nature of weaponry, but by the enlistment of “the people”; people whose emotions would distort the rational calculations of governments and the professional expertise of the military, but could never again be left out of account.

Now there has been a further change.

The paradigm (still largely accepted by Clausewitz) of “bipolar” wars fought between discrete states enjoying the support of their peoples has now been shattered by globalization.

Popular support can no longer be taken for granted. “The people” are no longer homogeneous and the enemy is no longer a single entity.

Further, “the enemy” is no longer the only actor to be taken into account. The information revolution means that every aspect, every incident of the conflict can be instantly broadcast throughout the world in width and in depth, and received by anyone with access to the internet; including the men in foxholes fighting it.

All this is common knowledge....

The ultimate object of combat is to convey a message; and to ensure that the message is understood, one has to understand the audience for which it is intended

In traditional “bipolar” war between nation states, the ultimate “audience” was the enemy population, which was assumed to be united behind their government and armed forces and therefore only likely to listen to reason once the latter had been defeated – or clearly would be defeated if they were brought to battle ...

This is a public explanation of why one is at war at all, and how the military operations are devised to serve the strategy that will lead to the desired political outcome.

Without such a narrative, no government can command the support of its people, nor, indeed, ensure effective planning by its armed forces – to say nothing of gaining the sympathy of “the strategic audience” beyond its own frontiers.

The narrative must not only be persuasive in rational terms.

It also needs drama to appeal to the emotions.

Above all, it needs an ethical foundation. Not only one’s own people, but the wider “strategic audience” must believe that one is fighting a “good” war."

In the early months of what was still a European War, the newly elected Benedict XV in his first Encyclical Ad Beatissimi Apostolorum (November 1914) had this to say about the conflict which was still in its early stages:

"Certainly those days would seem to have come upon us of which Christ Our Lord foretold: "You shall hear of wars and rumours of wars - for nation shall rise against nation, and kingdom against kingdom" (Matt. xxiv, 6, 7).

On every side the dread phantom of war holds sway: there is scarce room for another thought in the minds of men.

The combatants are the greatest and wealthiest nations of the earth; what wonder, then, if, well provided with the most awful weapons modern military science has devised, they strive to destroy one another with refinements of horror.

There is no limit to the measure of ruin and of slaughter; day by day the earth is drenched with newly-shed blood, and is covered with the bodies of the wounded and of the slain.

Who would imagine as we see them thus filled with hatred of one another, that they are all of one common stock, all of the same nature, all members of the same human society? Who would recognize brothers, whose Father is in Heaven?

Yet, while with numberless troops the furious battle is engaged, the sad cohorts of war, sorrow and distress swoop down upon every city and every home; day by day the mighty number of widows and orphans increases, and with the interruption of communications, trade is at a standstill; agriculture is abandoned; the arts are reduced to inactivity; the wealthy are in difficulties; the poor are reduced to abject misery; all are in distress."