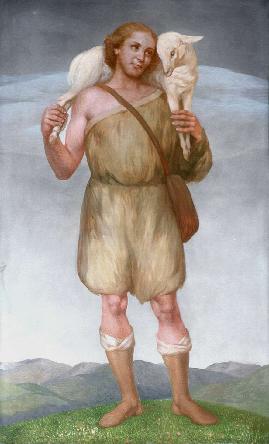 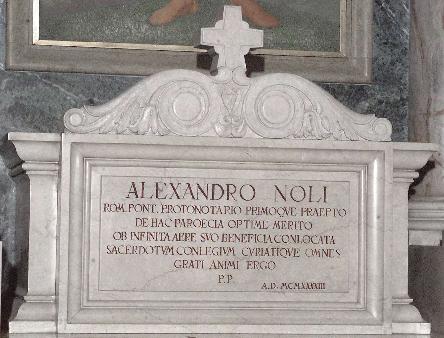 
Galizzi was born, bred and died in Bergamo

A symbolist, he executed many religious art works which are in many churches in the Bergamo area and further afield in Italy

An accomplished draughtsman he was also commissioned to do illustrations for books such as The life and death of John Falstaff for Dent and Sons, and more importantly later on the illustrations for a special centenary edition of I promessi sposi

The Church of Sant`Anna, a beautiful church in Bergamo, contains a number of other religious works by him such as the Via Crucis

Mons Alessandro Noli  was the first provost of the church. He was the pastor there for more than 50 years. It had been thought that to commemorate Mons Noli, a priest of dedication and sanctity, that there should be a Pietà but the then Bishop of Bergamo, decided on the Parable of the Good Shepherd.

An apt motif for a Christian tomb

Incidentally the remains of Mons Noli are not in the tomb. They still remain in the cemetery of Caravaggio

The image is of course Christ and the soul which He has saved. An ancient image which goes back to early Christian times

Galizzi`s Shepherd looks a bit of a simple plain straight forward sort of guy. What you see is what you get. Dependable. Direct. No side. If you were lost on the moors that is who you would want to see striding towards you to rescue you. Not stupid by any means. He knows the territory, waste ground where no cattle graze or people live. Just him and his sheep. (Now of course they are surrounded by windfarms)

Sheep is his business and his life. If you ever have met real shepherds, you know what I mean.

However the sheep are stupid and rather helpless. Just like sheep. They need constant attention and vigilance. A solitary sheep can not survive for long.

We are more used to shortened versions at Mass.

The full version of Christ`s words are perhaps not so well known.

The reaction of the first listeners of Christ`s words was total incredulity and disbelief. They thought he was mad and/or bad

1 “Amen, amen, I say to you, whoever does not enter a sheepfold through the gate but climbs over elsewhere is a thief and a robber.

2 But whoever enters through the gate is the shepherd of the sheep.

3 The gatekeeper opens it for him, and the sheep hear his voice, as he calls his own sheep by name and leads them out.

4 When he has driven out all his own, he walks ahead of them, and the sheep follow him,because they recognize his voice.

5 But they will not follow a stranger; they will run away from him, because they do not recognize the voice of strangers.”

6 Although Jesus used this figure of speech, they did not realize what he was trying to tell them.

8 All who came [before me] are thieves and robbers, but the sheep did not listen to them.

9 I am the gate. Whoever enters through me will be saved, and will come in and go out and find pasture.

10 A thief comes only to steal and slaughter and destroy; I came so that they might have life and have it more abundantly.

12 A hired man, who is not a shepherd and whose sheep are not his own, sees a wolf coming and leaves the sheep and runs away, and the wolf catches and scatters them.

13 This is because he works for pay and has no concern for the sheep.

14 I am the good shepherd, and I know mine and mine know me,

15 just as the Father knows me and I know the Father; and I will lay down my life for the sheep.

16 I have other sheep that do not belong to this fold. These also I must lead, and they will hear my voice, and there will be one flock, one shepherd.

17 This is why the Father loves me, because I lay down my life in order to take it up again.

18 No one takes it from me, but I lay it down on my own. I have power to lay it down, and power to take it up again.This command I have received from my Father.”

19 Again there was a division among the Jews because of these words.

20 Many of them said, “He is possessed and out of his mind; why listen to him?”

21 Others said, “These are not the words of one possessed; surely a demon cannot open the eyes of the blind, can he?”

Later Christ repeats the figure of speech that he is the Good Shepherd - in Jerusalem at the Feast of the Dedication (John 10, 22 - 42). It becomes his statement of who he is and what his mission is.It is literally a revelation, revealed truth

Feast of the Dedication.

22 The feast of the Dedication was then taking place in Jerusalem. It was winter.

23 And Jesus walked about in the temple area on the Portico of Solomon.

24 So the Jews gathered around him and said to him, “How long are you going to keep us in suspense? If you are the Messiah, tell us plainly.”

25 Jesus answered them, “I told you and you do not believe. The works I do in my Father’s name testify to me.

26 But you do not believe, because you are not among my sheep.

27 My sheep hear my voice; I know them, and they follow me.

28 I give them eternal life, and they shall never perish. No one can take them out of my hand.

29 My Father, who has given them to me, is greater than all, and no one can take them out of the Father’s hand.

31 The Jews again picked up rocks to stone him.

32 Jesus answered them, “I have shown you many good works from my Father. For which of these are you trying to stone me?”

33 The Jews answered him, “We are not stoning you for a good work but for blasphemy. You, a man, are making yourself God.”

On Vocations Sunday, preaching on this section of the Gospel,  Pope Francis said that this chapter of John contained "Jesus’ entire message, the core of His Gospel". It is perhaps a pity that the first part of the chapter was omitted on the Sunday

"Fourth Sunday of Easter is characterized by the Gospel of the Good Shepherd - in the tenth chapter of St. John – which we read every year.

These four verses contain Jesus’ entire message, the core of His Gospel: He calls us to participate in His relationship with the Father, and this is eternal life.

To express this deep understanding, this relationship of friendship Jesus uses the image of the shepherd with his sheep: he calls them, and they know his voice, they respond to his call and follow him.

How beautiful this parable is! The mystery of the voice is suggestive: from our mother's womb we learn to recognize her voice and that of our father, from the tone of a voice we perceive love or disdain, affection or coldness.

The voice of Jesus is unique! If we learn to distinguish it, He guides us on the path of life, a path that goes beyond the abyss of death.

But at a certain point Jesus, referring to his sheep, says: "My Father, who has given them to me..." (Jn 10,29). This is very important, it is a profound mystery, that is not easy to understand:

If I feel attracted to Jesus, if his voice warms my heart, it is thanks to God the Father, who has put in me the desire of love, of truth, life, beauty ... and Jesus is all this to the full! This helps us to understand the mystery of vocation, particularly the call to a special consecration."

And in today`s homily at in the chapel of the Casa Santa Marta with staff and journalists from the Vatican Press Office the Pope continued the theme of the Good Shepherd. Instead of the latter section of the Chapter used in Sunday`s Mass, the emphasis was on the first half of the Chapter. Christ is the gatekeeper of the sheep fold and we are his flock

Here is the report from Vatican Radio. He did not mince his words even at the risk of being called "a fundamentalist"

He spoke against the thieves and robbers who try to enter the sheep fold. The message is simple not complex, perhaps deceptively simple and easy to not totally comprehend or to become distracted by other things.

Christianity is not an intellectual sport or discipline. Any perceived complexity derives from self-delusion or self aggrandisement, the exaltation of the Self over God. Pride. The archetypal wolf in sheep`s clothing. Easy to spot in others but less in ourselves.

"In Monday’s Gospel, Jesus tells his disciples that whoever does not enter the sheepfold through the gate, is not a shepherd, but a thief and a robber.

In short, said Pope Francis, someone who seeks to profit for themselves, who only wants to climb the social ladder. The only gate to the Kingdom of God, to the Church - the Pope said - is Jesus Himself:

"These social climbers exist even in the Christian communities, no? those people who are looking for their own... and consciously or unconsciously pretend to enter but are thieves and robbers.

Why? Why steal the glory from Jesus? They want glory for themselves and this is what [Jesus] said to the Pharisees: You seek for each other's approval...'. That’s something of a ‘commercial’ religion, don’t you think? I give glory to you and you give glory to me. But these people did not enter through the true gate.

The [true] gate is Jesus and those who do not enter by this gate are mistaken.

Pope Francis continued, noting that Jesus is not only the gate, he is also the way, the path to follow on our journey. He said there are many paths that we can follow, some perhaps more advantageous than others in getting ahead, but they are “misleading, they are not real: they are false. The only path is Jesus ":

"Some of you may say: 'Father, you're a fundamentalist!'. No, simply put, this is what Jesus said : 'I am the gate', 'I am the path’ [He] gives life to us. Simple. It is a beautiful gate, a gate of love, it is a gate that does not deceive, it is not false. It always tells the truth. But with tenderness and love.

"Sometimes - the Pope said - we are tempted to be too much our own bosses and not humble children and servants of the Lord":

"And this is the temptation to look for other gates or other windows to enter the Kingdom of God.

We can only enter by the gate whose name is Jesus.

We can only enter by that gate which leads to a path and that path is called Jesus and brings to a life whose name is Jesus.

All those who do something else - says the Lord – who try to enter through the window, are 'thieves and robbers'. He is simple, the Lord. His words are not complex: He is simple”.

The Pope concluded by inviting all those present to ask for "the grace to always knock on that gate":

"Sometimes it's closed: we are sad, we feel desolation, we have problems with knocking, with knocking at that gate.

Do not go looking for other gates that seem easier, more comfortable, more at hand. Always the same one: Jesus.

Jesus never disappoints, Jesus does not deceive, Jesus is not a thief, not a robber. He gave his life for me: each of us must say this: 'And you who gave your life for me, please, open, that I may enter.' "