They will look on Him whom they have pierced 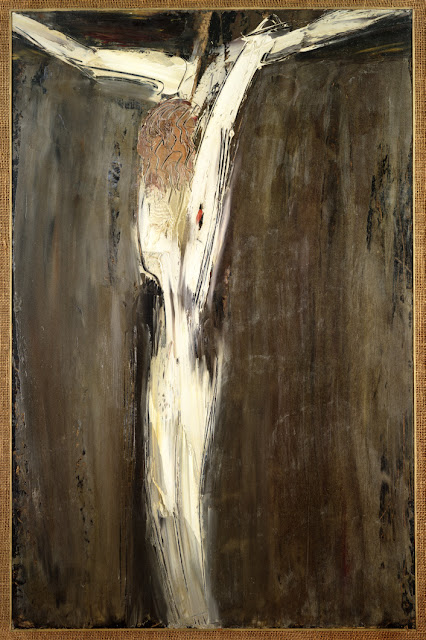 In 1959, he converted to Catholicism in Assisi and he embarked upon a series of paintings using Old and New Testament themes. In 1964 he attended the Eucharistic Congress in Bombay, travelling there with Pope Paul VI.

Christ Crucified is a central theme of his work

In a recent exhibition of Congdon`s works, William Congdon: The Sabbath of History there was included a meditation on Holy Week by the then Cardinal Ratzinger which seemed to mirror Congdon`s own response to this event in history

"“They will look on him whom they have pierced.”

And the whole liturgy of the Church is nothing more than gazing at the Pierced One, whose hidden countenance the priest reveals to the eyes of the Church and the world, in the Liturgy of Good Friday, the high point of the Church’s year.

“Behold the wood of the cross on which hung the savior of the world!” “They will look on him whom they have pierced.” ...

John reports on the event of the piercing of the Crucified with a characteristically elaborate solemnity that immediately shows the weight he attaches to this event.

In the account which concludes with an almost oath-like attestation, John incorporates two texts of the Old Testament, whose inclusion brings the meaning of this event to light.

He says, “None of his bones will be broken,” presenting a passage from the Passover rite of the Jews, one of the prescriptions concerning the paschal lamb. Thus he indicates that Jesus, whose side was pierced at the same hour as the ritual slaughter of the paschal lambs in the Temple, is the true paschal lamb without blemish in whom the meaning of all cultus and ritual is finally fulfilled; indeed, it becomes clear for the first time what cultus truly means. ...

The second text of the Old Testament, built into the scene where Jesus’ side is pierced by the soldier’s lance, makes still clearer what is meant, even as the allusion is difficult to understand in detail. John says that a soldier opened the side of Jesus with a lance.

He uses here the same word that in the Old Testament is used in the depiction of the creation of Eve from the side of the sleeping Adam. Whatever this reference may mean in its particulars, this much is clear, namely, that he wants to say that the mystery of man’s and woman’s creation from and for each other is repeated in the communion of Christ and believing mankind.

The Church originates from the opened side of the dying Christ."

In yesterday`s The Passion of the Lord homily, given by Capuchin Friar Raniero Cantalamessa, Preacher of the Papal Household at the Vatican, in this Year of Faith he said:

"Christ also confided to his Church a message: "Go throughout the whole world, preach the good news to all creation."

The evangelization has a mystical origin; it is a gift that comes from the cross of Christ, from that open side, from that blood and from that water.

The love of Christ, like that of the Trinity of which it is the historical manifestation, is "diffusivum sui", it tends to expand and reach all creatures, "especially those most needy of thy mercy."

Christian evangelization is not a conquest, not propaganda; it is the gift of God to the world in his Son Jesus.”