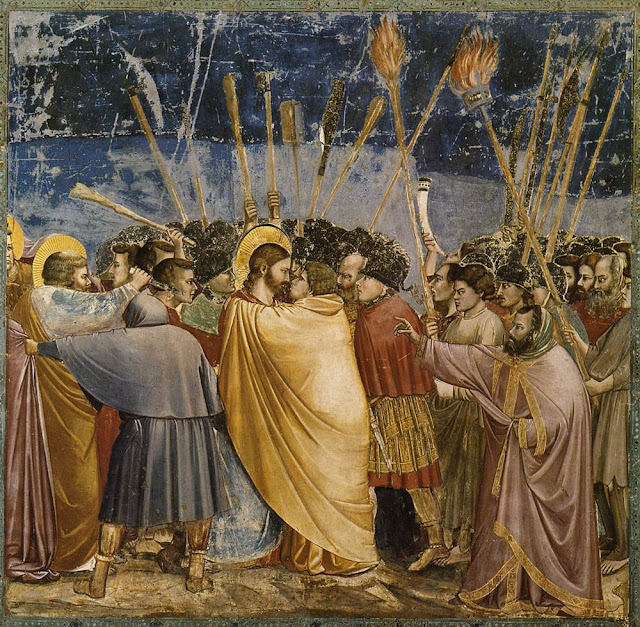 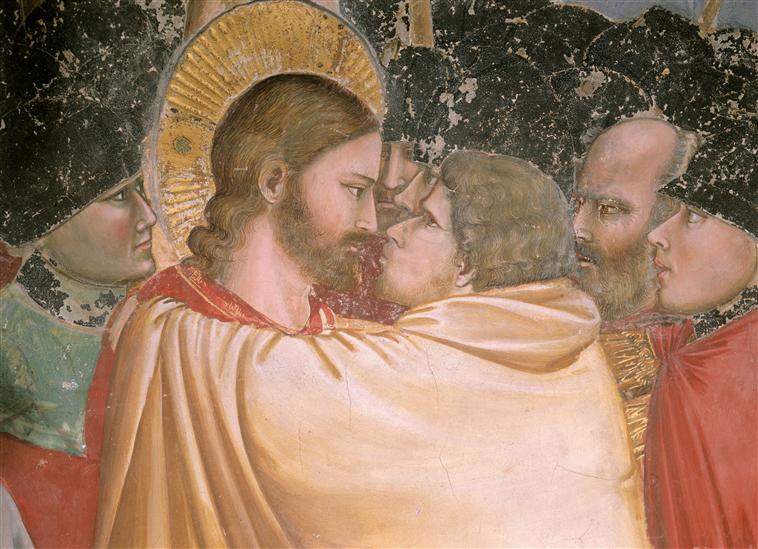 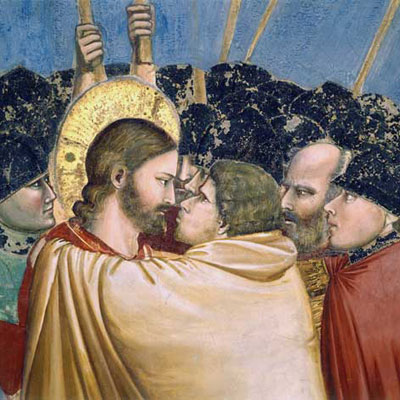 It is not like other kisses that we see in the Bible. It is not the Kiss of Peace or the Kiss in the Song of Solomon. It is not a kiss of homage or between parent and child or between relatives or friends.

In France they call it the baiser de la mort, the Kiss of Death as well as The Kiss of Judas

It is the kiss which heralds a violent death for the one who receives it, at the hands of the person who gives it

It is a parody and perversion of a kiss, a loving embrace

The kisser is filled with anger and hate. Love is completely absent

There is no kiss in John

In Dante`s Inferno, the ninth and innermost Circle is the circle of treachery as fraudulent acts between individuals who share special bonds of love and trust

This Circle is itself again divided into four regions. One is called Judecca, named after Judas Iscariot. It is the innermost zone of the ninth and final circle of hell.

In that circle he is the soul who suffers most:

Judas in this portrait is the Benedict Arnold to Christ`s Washington.

However Dante`s portrait of Judas is not definitive.

According to Luke xxii. 3-5 Satan entered into Judas while he sat at the table, among the rest of the Apostles, to partake of the Passover meal. This is the version favoured in the painting below 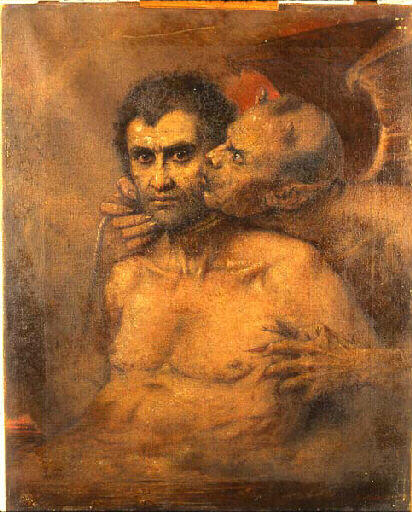 
The problems in the differing Scriptural accounts and the differing view of the Church fathers can be seen in William Kent`s article . "Judas Iscariot." The Catholic Encyclopedia. Vol. 8. New York: Robert Appleton Company, 1910. 27 Mar. 2013 >.

"it may be urged that in exaggerating the original malice of Judas, or denying that there was even any good in him, we minimize or miss the lesson of this fall.

The examples of the saints are lost on us if we think of them as being of another order without our human weaknesses.

And in the same way it is a grave mistake to think of Judas as a demon without any elements of goodness and grace.

In his fall is left a warning that even the great grace of the Apostolate and the familiar friendship of Jesus may be of no avail to one who is unfaithful.

And, though nothing should be allowed to palliate the guilt of the great betrayal, it may become more intelligible if we think of it as the outcome of gradual failing in lesser things.

So again the repentance may be taken to imply that the traitor deceived himself by a false hope that after all Christ might pass through the midst of His enemies as He had done before at the brow of the mountain.

And though the circumstances of the death of the traitor give too much reason to fear the worst, the Sacred Text does not distinctly reject the possibility of real repentance."

"That Jesus should have [apparently] shown so little foresight in the choice of an apostle naturally caused great perplexity to his followers; and consequently the Gospels present the facts of the betrayal as well as the character of Judas from partisan points of view and in different ways. ...

In all likelihood, Judas, being of the district of Judah, while the rest were all Galileans, was not impressed with the Messianic character claimed by Jesus, and therefore, merely to obtain immunity for himself, committed the cowardly act of betraying him to the soldiers and officers of the priests that came with swords and staves to seize him and his followers.

He singled out Jesus by kissing him while greeting him as rabbi (John xviii. 1 et seq.); they then seized Jesus and brought him bound to Annas and Caiaphas the high priest (Matt. xxvi. 47 et seq., and par. pas.), while his disciples, including Peter, left their master to his destiny."