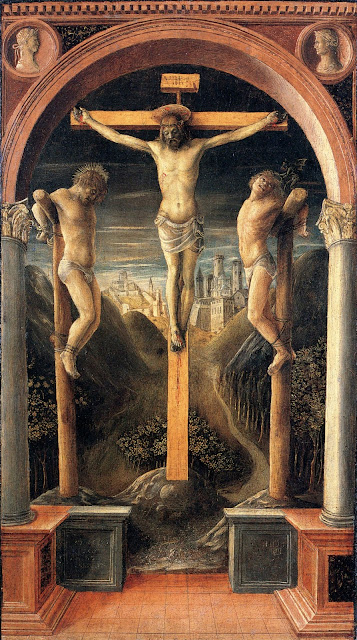 
This work is one of the oldest works of the Lombard Renaissance, of the Brescian school

In the background is a city and castle and from these a serpentine and narrow road leads to Golgotha, the scene of the Crucifixion. Likewise from the point of view of the viewer, the road from Golgotha to the City is through a gate and then the road

The road goes two ways. Some art critics may forget this

The Crucifixion is at the Gate of the outskirts of the City and it is a narrow gate. It should remind us of the famous Gate into the City of Jerusalem referred to by Christ. It was so narrow that He described it as being like "the eye of the needle"

However although it is narrow it is not impassable. There are no obstacles barring the gate. One person if he or she so wished could pass through the gate. The gate is open to all of those who choose to enter

We, the viewers, gaze facing east (or virtual East) towards Jerusalem. To reach the celestial city- Jerusalem, the city of the Resurrection and Eternal Life - we have to pass by and through Death and the Crucifixion

The priest would have his back to the congregation and in the most solemn act of the Mass, his identity would be hidden and he would simply be "the priest", the channel through which the Sacrifice would be repeated.

After the Sacrifice and the proclamation of Death and Resurrection, both the priest and the congregation would have received the Eucharist. They would have carried on their journeys (hopefully joyfully) in accordance with the command: "Ite missa est"

To face westwards (or virtually Westwards) would of course have been a problem.

We would no longer gaze on the face of Christ. We would be turning our backs on the Crucifixion and all that it means. A never ending problem for mankind over the last two thousand years

That was the problem faced one Good Friday four hundred years ago by the English poet John Donne. It happened about 150 years after the painting was completed.

The anniversary of the event and the poem to which it gave rise is celebrated in this week`s Times Literary Supplement in Daniel Starza Smith John Donne’s “Goodfriday, 1613. Riding Westward”, at 400

Here is the poem:

Let mans Soule be a Spheare, and then, in this,
The intelligence that moves, devotion is,
And as the other Spheares, by being growne
Subject to forraigne motion, lose their owne,
And being by others hurried every day,
Scarce in a yeare their naturall forme obey:
Pleasure or businesse, so, our Soules admit
For their first mover, and are whirld by it.

Hence is't, that I am carryed towards the West
This day, when my Soules forme bends toward the East.

There I should see a Sunne, by rising set,
And by that setting endlesse day beget;
But that Christ on this Crosse, did rise and fall,
Sinne had eternally benighted all.

Yet dare I'almost be glad, I do not see
That spectacle of too much weight for mee.

Who sees Gods face, that is selfe life, must dye;
What a death were it then to see God dye?

It made his owne Lieutenant Nature shrinke,
It made his footstoole crack, and the Sunne winke.

Could I behold those hands which span the Poles,
And tune all spheares at once peirc'd with those holes?

Could I behold that endlesse height which is
Zenith to us, and our Antipodes,
Humbled below us? or that blood which is
The seat of all our Soules, if not of his,
Made durt of dust, or that flesh which was worne
By God, for his apparell, rag'd, and torne?

If on these things I durst not looke, durst I
Upon his miserable mother cast mine eye,
Who was Gods partner here, and furnish'd thus
Halfe of that Sacrifice, which ransom'd us?
Though these things, as I ride, be from mine eye,
They'are present yet unto my memory,
For that looks towards them; and thou look'st towards mee,
O Saviour, as thou hang'st upon the tree;
I turne my backe to thee, but to receive
Corrections, till thy mercies bid thee leave.

O thinke mee worth thine anger, punish mee,
Burne off my rusts, and my deformity,
Restore thine Image, so much, by thy grace,
That thou may'st know mee, and I'll turne my face