The prayer of Jesus in Gethsemane 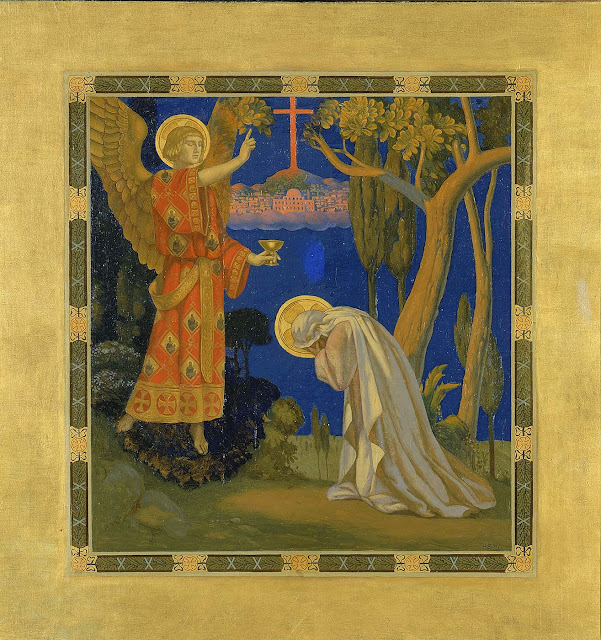 Mowbray was born of English parents in Egypt. Orphaned when young, he was brought to the United States by his uncle and aunt. He became a naturalised American,
Mowbray moved to Paris in 1878 to study with Leon Bonnat, one of the leading European academic painters of the time

The apse, ceiling, and lunettes of the Rotunda of the McKim building in New York City were designed and executed by Mowbray The paintings of the Rotunda's dome  inspired by Raphael's famous vault decorations for the Stanza della Segnatura in the Vatican

" Nowhere else in sacred Scripture do we gain so deep an insight into the inner mystery of Jesus as in the prayer on the Mount of Olives” (Jesus of Nazareth II, 157)"

"After the invitation addressed to the three to remain and watch in prayer, Jesus “alone” turns to the Father. The Evangelist Mark tells us that,

“going a little farther, he fell on the ground and prayed that, if it were possible, the hour might pass from him” (14:35).

Jesus falls face to the ground:

It is the prayer posture that expresses obedience to the Father’s will -- a total, trusting abandonment to Him. It is a gesture that is repeated at the beginning of the Celebration of the Lord’s Passion on Good Friday, as well as at monastic professions and diaconal, priestly and episcopal ordinations in order to express in prayer, and also in a bodily way, the complete entrustment of oneself to God, and reliance on Him.

Jesus continues by asking the Father that, if it were possible, this hour might pass from him.

This is not only the fear and anguish of a man faced with death; it is the inner turmoil of the Son of God, who sees the terrible flood of evil that he must take upon himself in order to overcome it, to deprive it of its power.

Dear friends, in prayer we too must be capable of bringing before God our struggles, the suffering of certain situations, of certain days, the daily undertaking of following him, of being Christians, and also the weight of evil that we see within ourselves and around us, so that he may give us hope, that he may make us feel his closeness and give us a little light on the path of life.

“Abba! Father! All things are possible to thee; remove this chalice from me; yet not what I will, but what you will” (14:36).

In this appeal, there are three revealing passages. At the beginning, we have the double use of the word that Jesus uses to address himself to God:

We are well aware that the Aramaic word Abba was used by a child to address his father, and that it therefore expresses Jesus’ relationship with God the Father, a relationship of tenderness, affection, trust and abandonment.

In the central part of the appeal there is a second element: the awareness of the Father’s omnipotence -- “All things are possible to thee” -- that introduces a request in which the drama of Jesus’ human will in the face of death and evil again appears:

“Remove this chalice from me.”

But there is a third expression in Jesus’ prayer, and it is the decisive one in which his human will adheres fully to the divine will. Jesus, in fact, concludes by saying forcefully:

In Mowbray`s deceptively simple image, all this is conveyed clearly, concisely and powerfully In his meditation on the Passion, Mowbray far surpasses anything  painted by him when he was the Painter of the Gilded Age.