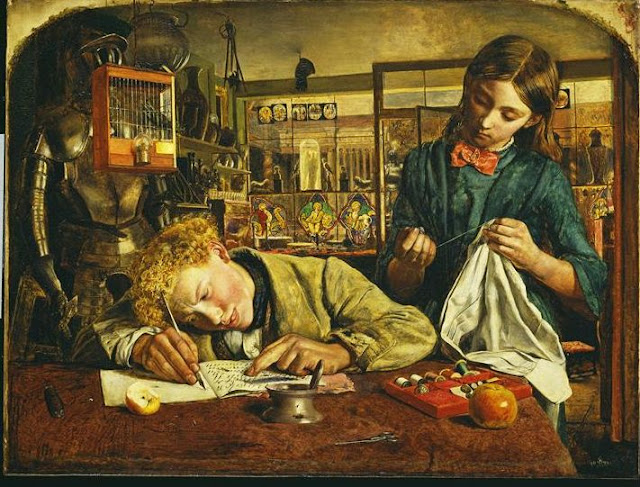 
Martineau was articled to a firm of solicitors, but abandoned law in favour of art

The tragic heroine of the novel Nell Trent, lives with her maternal grandfather in his shop of odds and ends.

Her only friend is Kit, an honest boy employed at the shop, and whom she is teaching to write

Leading the celebrations for the bicentenary of Dickens` birth, Prince Charles laid a wreath on the author's grave in Poets' Corner in Westminster Abbey where he was buried in 1870

There are now numerous exhibitions and disiplays celebrating the great event all attempting to explain and illustrate the greatness of Dickens and his works:

The Museum of London:  Dickens and London

His novels and other works can be downloaded and read at

Dickens is a humourist, a master of the grotesque.Some of his most famous characters and his settings are both believable and utterly fantastical. His stories are filled with the comic and tragic, the redeeming and destructive, and the mysterious and forthright

He held strong views, views in many ways which were not of his time and were timeless and universal.

Perhaps another writer of the "Grotesque", Flannery O`Connor, has explained why Dickens used the grotesque and why it was such an important part of his writing:

"“When you can assume that your audience holds the same beliefs you do, you can relax and use more normal means of talking to it; when you have to assume that it does not, then you have to make your vision apparent by shock -- to the hard of hearing you shout, and for the almost-blind you draw large and startling figures.”
― Flannery O'Connor, Wise Blood

And Dickens is still shouting to us today and will for many centuries to come.

Here he writes about a favourite entertainment in early Victorian Britain: the watching of a public execution. In 1849, he witnessed with 30,000 other people the public execution in Central London of two criminals, the Mannings, for murder. The experience as the letter which he wrote to The Times below left him disgusted and revolted. Frightened to upset the mob in the light of the disruptions caused by the Chartists and the events of 1848, the authorities did not stop these events for another twenty years: 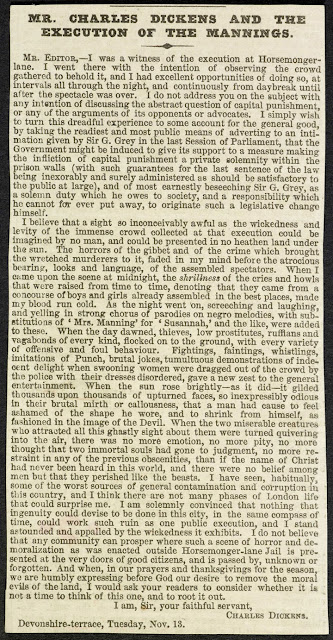