Fra Angelico: The Transfiguration in Cell 6 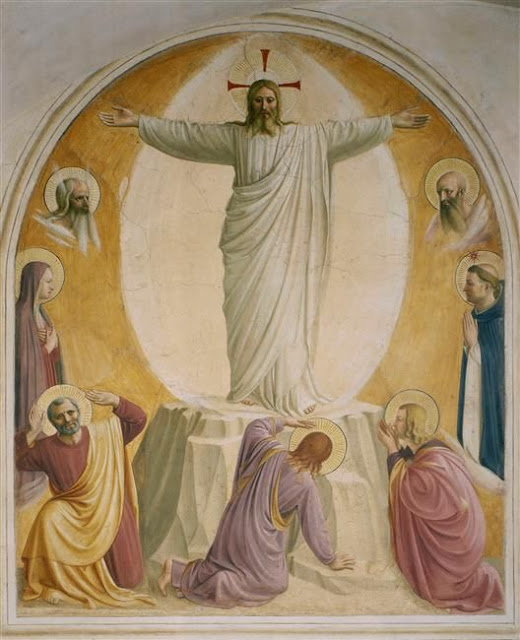 Blessed Fra Angelico, Guido di Pietro (c. 1395 – February 18, 1455)
The Transfiguration In Cell 6 of the Convent of San Marco
Fresco
1.93m x 1.64m
Museo di San Marco, Florence
This work is a work for contemplation.
It is simple and restrained. It narrates but does not overtly and readily explain the significant event depicted.
It contains a great deal of detail so that who ever resided in Cell 6 would never tire of seeing the work. It is a work going far beyond the events of the Transfiguration on Mount Tabor, the incident narrated in Matthew 17: 1 - 9
Christ stands on a rock. We are reminded that upon the rock he would build his church.
He is transfigured and transformed, dressed in glowing white. His face and eyes are bright and numinous. We are reminded of his Resurrection.
His arms are outstretched as they were in the Crucifixion. As in the Crucifixion, Mary and John are present at the foot of the Cross.
Moses and Elias are shown as heads, beneath the arms of Christ. We are reminded of the Old and New Covenants and how the New Covenant supersedes the Old.
At the base of the rock are three crouching Apostles. Fear, awe, amazement, seem to dominate their reations to what is unfolding before them.
Mary and Saint Dominic are present standing on either side. They are praying. Mary and St Dominic were of course not present at The Transfiguration. Fra Angelico was not aiming at historic verisimilitude when he illustrated Holy Scripture. He painted images with a threshold for visible recognition but also wanted to use it to indicate the number of meanings contained in a passage of Scripture.
He was illustrating Doctrine, prophecy and an Image for Contemplation
But we do not hear the voice mentioned in Matthew 17: 1 - 9:

‘This is my Son, the Beloved; he enjoys my favour. Listen to him.’

But we see the effect of the words of the Voice on the Apostles: fear. Peter appears the most fearful.
We are invited to recall that on hearing the voice, the disciples were overcome with fear and Christ said to them:

Fra Angelico`s painting is more than a depiction of the bare historical event known as The Transfiguration contained in Matthew 17: 1 - 9. He puts the event in its Scriptural context of Matthew 16: 13 to Matthew 17: 22.
Within this context we see the references to Elijah and the prophets, the building of Christ`s Church on the Rock, Peter`s role in the Church, the prophecy that some of the Apostles would see the Son of Man in glory before their deaths, the prophecy by Christ of his death and his Resurrection and the incomprehension of the Apostles as to who Christ was and what was his message
Here is Matthew 16: 13 to Matthew 17: 22:

"Chapter 16: 13 When Jesus came to the region of Caesarea Philippi, he asked his disciples, “Who do people say the Son of Man is?”
14 They replied, “Some say John the Baptist; others say Elijah; and still others, Jeremiah or one of the prophets.”
15 “But what about you?” he asked. “Who do you say I am?”
16 Simon Peter answered, “You are the Christ, the Son of the living God.”
17 Jesus replied, “Blessed are you, Simon son of Jonah, for this was not revealed to you by man, but by my Father in heaven. 18 And I tell you that you are Peter, and on this rock I will build my church, and the gates of Hades will not overcome it. 19 I will give you the keys of the kingdom of heaven; whatever you bind on earth will be bound in heaven, and whatever you loose on earth will be loosed in heaven.” 20 Then he warned his disciples not to tell anyone that he was the Christ.
21 From that time on Jesus began to explain to his disciples that he must go to Jerusalem and suffer many things at the hands of the elders, chief priests and teachers of the law, and that he must be killed and on the third day be raised to life.
22 Peter took him aside and began to rebuke him. “Never, Lord!” he said. “This shall never happen to you!”
23 Jesus turned and said to Peter, “Get behind me, Satan! You are a stumbling block to me; you do not have in mind the things of God, but the things of men.”
24 Then Jesus said to his disciples, “If anyone would come after me, he must deny himself and take up his cross and follow me. 25 For whoever wants to save his life will lose it, but whoever loses his life for me will find it. 26 What good will it be for a man if he gains the whole world, yet forfeits his soul? Or what can a man give in exchange for his soul? 27 For the Son of Man is going to come in his Father’s glory with his angels, and then he will reward each person according to what he has done. 28 I tell you the truth, some who are standing here will not taste death before they see the Son of Man coming in his kingdom.”
Chapter 17 1 After six days Jesus took with him Peter, James and John the brother of James, and led them up a high mountain by themselves. 2 There he was transfigured before them. His face shone like the sun, and his clothes became as white as the light. 3 Just then there appeared before them Moses and Elijah, talking with Jesus.
4 Peter said to Jesus, “Lord, it is good for us to be here. If you wish, I will put up three shelters—one for you, one for Moses and one for Elijah.”
5 While he was still speaking, a bright cloud enveloped them, and a voice from the cloud said, “This is my Son, whom I love; with him I am well pleased. Listen to him!”
6 When the disciples heard this, they fell facedown to the ground, terrified. 7 But Jesus came and touched them. “Get up,” he said. “Don’t be afraid.” 8 When they looked up, they saw no one except Jesus.
9 As they were coming down the mountain, Jesus instructed them, “Don’t tell anyone what you have seen, until the Son of Man has been raised from the dead.”
10 The disciples asked him, “Why then do the teachers of the law say that Elijah must come first?”
11 Jesus replied, “To be sure, Elijah comes and will restore all things. 12 But I tell you, Elijah has already come, and they did not recognize him, but have done to him everything they wished. In the same way the Son of Man is going to suffer at their hands.” 13 Then the disciples understood that he was talking to them about John the Baptist.
14 When they came to the crowd, a man approached Jesus and knelt before him.
15 “Lord, have mercy on my son,” he said. “He has seizures and is suffering greatly. He often falls into the fire or into the water. 16 I brought him to your disciples, but they could not heal him.”
17 “O unbelieving and perverse generation,” Jesus replied, “how long shall I stay with you? How long shall I put up with you? Bring the boy here to me.” 18 Jesus rebuked the demon, and it came out of the boy, and he was healed from that moment.
19 Then the disciples came to Jesus in private and asked, “Why couldn’t we drive it out?”
20 He replied, “Because you have so little faith. I tell you the truth, if you have faith as small as a mustard seed, you can say to this mountain, ‘Move from here to there’ and it will move. Nothing will be impossible for you.”
22 When they came together in Galilee, he said to them, “The Son of Man is going to be betrayed into the hands of men. 23 They will kill him, and on the third day he will be raised to life.” And the disciples were filled with grief."