The Demolition of the Old St Peters 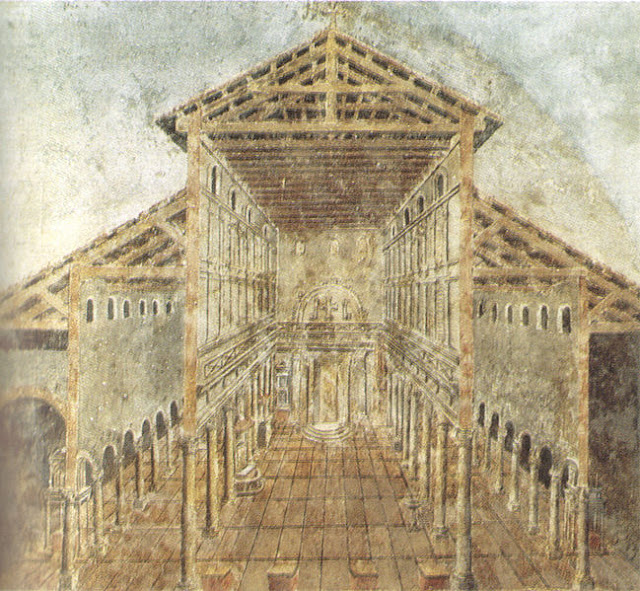 Fresco depiction of the Constantinian Basilica in Medieval times 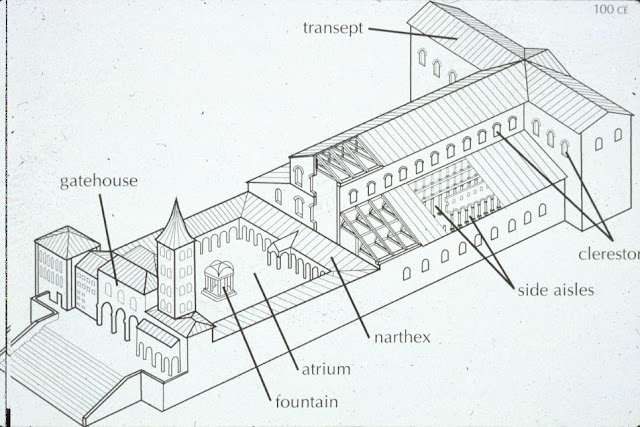 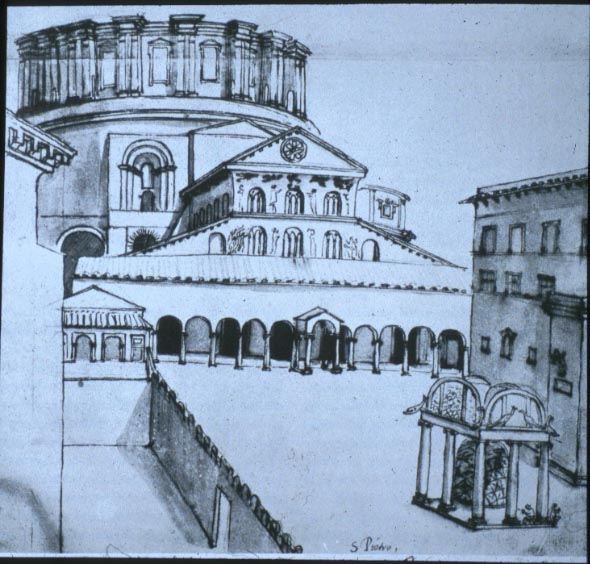 In March 2010 there is to be a conference, hosted by the British School at Rome on the subject of the Old St Peters in Rome, the basilica that was built by Constantine at the Vatican in the early fourth century to mark the burial place of the Apostle Peter became the central place for Christian worship in the West for more than a millennium until its protracted demolition over the course of the sixteenth century

"At the beginning of Paul V.'s pontificate, there still stood untouched a considerable portion of the nave of the Constantinian basilica. It was separated from the new church by a wall put up by Paul III.

There likewise remained the extensive buildings situate in front of the basilica. The forecourt, flanked on the right by the house of the archpriest and on the right by the benediction loggia of three bays and the old belfry, formed an oblong square which had originally been surrounded by porticoes of Corinthian columns.

The lateral porticos, however, had had to make room for other buildings—those on the left for the oratory of the confraternity of the Blessed Sacrament built under Gregory XIII., and the house of the Cappella Giulia and the lower ministers of the church, and those on the right for the spacious palace of Innocent VIII.

In the middle of this square, at a small distance from the facade of the present basilica, stood the fountain (cantharus) erected either by Constantine or by his son Constantius, under a small dome supported by eight columns and surmounted by a colossal bronze cone which was believed to have been taken from the mausoleum of Hadrian.

From this court the eye contemplated the facade of old St. Peter's, resplendent with gold and vivid colours and completely covered with mosaics which had been restored in the sixteenth century, and crowned, in the centre, by a figure of Christ enthroned and giving His blessing.

To this image millions of devout pilgrims had gazed up during the centuries.

Internally the five-aisled basilica, with its forest of precious columns, was adorned with a wealth of altars, shrines and monuments of Popes and other ecclesiastical and secular dignitaries of every century. The roof consisted of open woodwork. The walls of the central nave, from the architrave upwards, displayed both in colour and in mosaic, scenes from Holy Scripture and the portraits of all the Popes.

It is easy to understand Paul V.'s hesitation to lay hands on a basilica so venerable by reason of the memories of a history of more than a thousand years, and endowed with so immense a wealth of sacred shrines and precious monuments.

On the other hand, the juxtaposition of two utterly heterogeneous buildings, the curious effect of which may be observed in the sketches of Marten van Heemskerk, could not be tolerated for ever. To this must be added the ruinous condition, already ascertained at the time of Nicholas V and Julius V., of the fourth century basilica a condition of which Paul V. himself speaks in some of his inscriptions as a notorious fact.

A most trustworthy contemporary, Jacopo Grimaldi, attests that the paintings on the South wall were almost unrecognizable owing to the crust of dust which stuck to them, whilst the opposite wall was leaning inwards.

Elsewhere also, even in the woodwork of the open roof, many damaged places were apparent. An earthquake could not have failed to turn the whole church into a heap of ruins.

An alarming occurrence came as a further warning to make haste. During a severe storm, in September, 1605, a huge marble block fell from a window near the altar of the Madonna della Colonna. Mass was being said at that altar at the time so that it seemed a miracle that no one was hurt.

Cardinal Pallotta, the archpriest of St. Peter's, pointed to this occurrence in the consistory of September 26th, 1605, in which he reported on the dilapidated condition of the basilica, basing himself on the reports of the experts.

As a sequel to a decision by the cardinalitial commission of September 17th, the Pope resolved to demolish the remaining part of the old basilica. At the same time he decreed that the various monuments and the relics of the Saints should be removed and preserved with the greatest care.' These injunctions were no doubt prompted by the strong opposition raised by the learned historian of the Church, Cardinal Baronius, against the demolition of a building which enshrined so many sacred and inspiring monuments of the history of the papacy. To Cardinal Pallotta was allotted the task of superintending the work of demolition.

Sestilio Mazucca, bishop of Alessano and Paolo Bizoni, both canons of St. Peter's, received pressing recommendations from Paul V. to watch over the monuments of the venerable sanctuary and to see to it that everything was accurately preserved for posterity by means of pictures and written accounts, especially the Lady Chapel of John VII., at the entrance to the basilica, which was entirely covered with mosaics, the ciborium with Veronica's handkerchief, the mosaics of Gregory XI on the facade and other ancient monuments. On the occasion of the translation of the sacred bodies and relics of Saints, protocols were to be drawn up and graves were only to be opened in presence of the clergy of the basilica. The bishop of Alessano was charged to superintend everything.

It must be regarded as a piece of particularly good fortune that in Jacopo Grimaldi (died January 7th, 1623) canon and keeper of the archives of the Chapter of St. Peter's, a man was found who thoroughly understood the past and who also possessed extensive technical knowledge. He made accurate drawings and sketches of the various monuments doomed to destruction.

The plan of the work of demolition, as drawn up in the architect's office, probably under Maderno's direction, comprised three tasks : viz. the opening of the Popes' graves and other sepulchral monuments as well as the reliquaries, and the translation of their contents ; then the demolition itself, in which every precaution was to be taken against a possible catastrophe ; thirdly, the preservation of all those objects which, out of reverence, were to be housed in the crypt—the so-called Vatican Grottos—or which were to be utilized in one way or another in the new structure.

As soon as the demolition had been decided upon, the work began.

On September 28th, Cardinal Pallotta transferred the Blessed Sacrament in solemn procession, accompanied by all the clergy of the basilica, into the new building where it was placed in the Cappella Gregoriana. Next the altar of the Apostles SS. Simon and Jude was deprived of its consecration with the ceremonies prescribed by the ritual ; the relics it had contained were translated into the new church, after which the altar was taken down. On October 11th, the tomb of Boniface VIII. was opened and on the 20th that of Boniface IV., close to the adjoining altar.

The following day witnessed the taking up of the bodies of SS. Processus and Martinianus. On October 30th, Paul V. inspected the work of demolition of the altars and ordered the erection of new ones so that the number of the seven privileged altars might be preserved.

On December 29th, 1605, the mortal remains of St. Gregory the Great were taken up with special solemnity, and on January 8th, 1606, they were translated into the Cappella Clementina. The same month also witnessed the demolition of the altar under which rested the bones of Leo IX., and that of the altar of the Holy Cross under which Paul I. had laid the body of St. Petronilla, in the year 757. Great pomp marked the translation of all these relics ; similar solemnity was observed on January 26th, at the translation of Veronica's handkerchief, the head of St. Andrew and the holy lance. These relics were temporarily kept, for greater safety, in the last room of the Chapter archives.

So many graves had now been opened in the floor that it became necessary to remove the earth to the rapidly growing rubbish heap near the Porta Angelica.

On February 8th, 1606, the dismantling of the roof began and on February 16th the great marble cross of the facade was taken down. Work proceeded with the utmost speed ; the Pope came down in person to urge the workmen to make haste. These visits convinced him of the decay of the venerable old basilica whose collapse had been predicted for the year 1609. The work proceeded with feverish rapidity—the labourers toiled even at night, by candle light.

The demolition of the walls began on March 29th ; their utter dilapidation now became apparent. The cause of this condition was subsequently ascertained ; the South wall and the columns that supported it, had been erected on the remains of Nero's race-course which were unable to bear indefinitely so heavy a weight.

In July, 1606, a committee was appointed which also included Jacopo Grimaldi. It was charged by the cardinalitial commission with the task of seeing to the preservation of the monuments of the Popes situate in the lateral aisles and in the central nave of the basilica. The grave of Innocent VIII. was opened on September 5th, after which the bones of Nicholas V., Urban VI., Innocent VII. and IX., Marcellus II. and Hadrian IV. were similarly raised and translated.

In May, 1607, the body of Leo the Great was found. Subsequently the remains of the second, third and fourth Leos were likewise found ; they were all enclosed in a magnificent marble sarcophagus. Paul V. came down on May 30th to venerate the relics of his holy predecessors

Meanwhile the discussions of the commission of Cardinals on the completion of the new building had also been concluded. They had lasted nearly two years"

Grimaldi is also notable for saving the remains of Pope Urban VI's remains from being discarded in 1606 and his sarcophagus used for a water trough. Urban VI was buried in a 3rd century sarcophagus already occupied by a married couple. Devoid of the name, for many years it remained exposed to the chaos of the building site of the new basilica. It was recognized and salvaged by  Grimaldi

It is thought that the demolition and the rebuilding of St. Peter's was responsible for the destruction of approximately half of all papal tombs up to the time of the demolition.