The tomb of Archbishop Henry Chichele 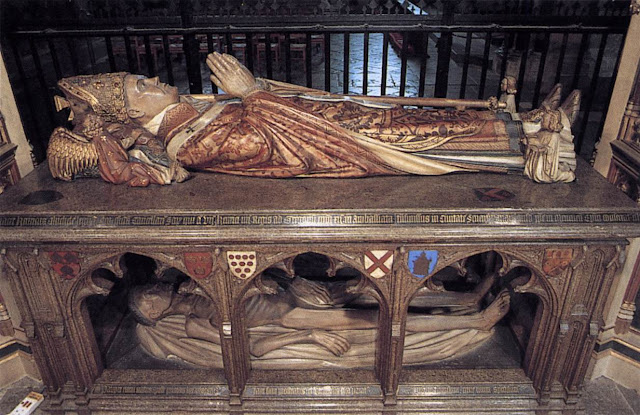 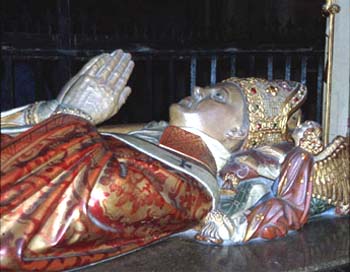 
One of the interesting sights in Canterbury Cathedral is the extravagant and colourful tomb of Archbishop Henry Chichele (c. 1364 – April 12, 1443). His life was eventful. Like all ecclesiatics of his time, he was a powerful political magnate.

A "potted biography" of him is available at Wikipedia

Archbishop Henry Chichele founded All Souls College, Oxford, in 1438, to provide education for future public servants and scholars, in the service of the king.

The tomb was erected for him in 1424-6. The archbishop died in 1443. His tomb shows him in splendid robes , and as a naked corpse lying on a shroud below.

Beginning in the 15th century, cadaver tombs were a departure, in tomb architecture, from the usual practice of showing merely an effigy of the person as they were in life.

These tombs were made only for high-ranking nobles, usually royalty or bishops, because one had to be rich to afford to have one made, and powerful to be allotted space for one in a church.

A cadaver tomb (or "transi-tomb" or "memento mori tomb") is a sarcophagus that resembles a carved stone bunk-bed with the deceased shown alive on the top level (life-sized and often kneeling in prayer) and in death on the bottom level, in the grave and complete with worms, rot, and shroud.

It is also another reminder that medieval art in churches was full of bright and vivid colours.
Posted by Unknown at 8:33 pm