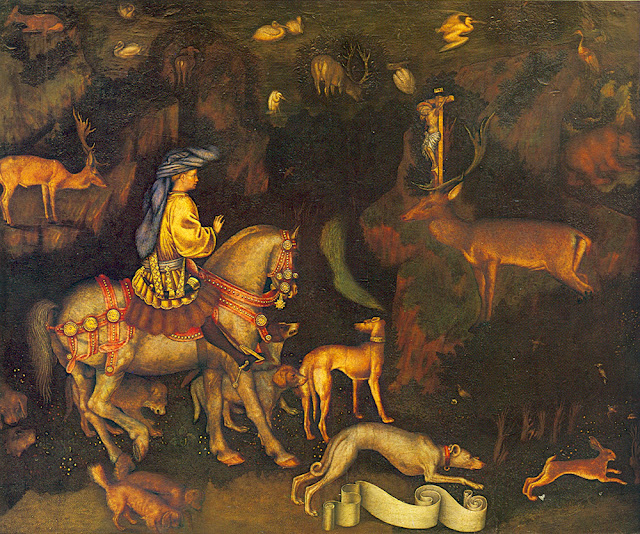 The story is told of Saint Eustace that while out hunting he saw a stag with a Crucifix between its antlers and was converted to Christianity.

Pisanello was one of the most distinguished painters of the early Italian Renaissance and Quattrocento. He was acclaimed by poets such as Guarino da Verona and praised by humanists of his time who compared him to such illustrious names as Cimabue, Phidias and Praxiteles.

He was the most famous artist of his time, celebrated as both painter and medallist.

He is recorded in Pisa, Venice, Florence, Mantua, Rome, Ferrara, Milan and Naples. Most notably he was employed at the d'Este court at Ferrara and the Gonzaga court at Mantua.

Pisanello was also the greatest portrait medallist of his period and arguably of the whole Renaissance, his work setting standards of delicacy, precision, and clarity that have not been surpassed.

His art is exceptional for its elegance and its naturalism. While he treats subjects from legend and the Bible, he transposes them to his own time, offering a vivid picture of life in Italy in the fifteenth century.
Posted by Unknown at 9:37 am