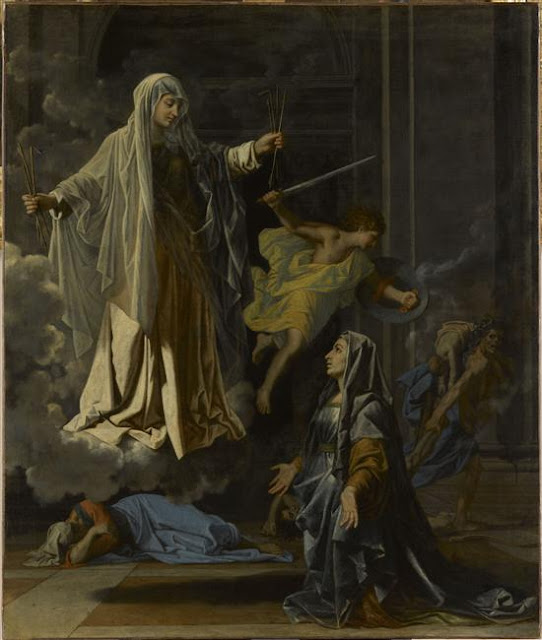 Over three quarter of Poussin`s paintings have religious subjects

The Louvre presently has an exhibition on Nicolas Poussin (1594 – 1665) and his religious works: Poussin et Dieu

The exhibition tries to review possible Christian readings of Poussin's painting and one of his signature features: his merging of the antique and Christian notions of the sacred

Poussin’s religious paintings have been studied far less than his secular works, largely due to the image of the artist that some art historians (in particular Anthony Blunt) have created

He resided in baroque Rome, in the period that followed the Council of Trent.

Teaching may have been one purpose but as Paleotti pointed out the senses, interest and emotions of the spectator were also to be engaged

In addition to straight forward religious themes, he also used  religious motifs in his mythological works.

For Blunt, Poussin is the great Stoic. Animated by great passion which is concentrated by serious intelligence, reason and the will

This painting of Saint Francesca Romana  (1384 – March 9, 1440)  is usually categorised as a commission as indeed it was - for Cardinal Giulio Rospigliosi (the future Pope Clement IX)

In 1656, the plague killed about half of Naples' 300,000 inhabitants. It was the worst disaster to strike the kingdom and city of Naples in the 1600s

First, the Saint is appearing to a Roman lady or Carmelite (possibly Anna Colonna Barberini, founder of the convent and the Carmelite cchurch of Regina Coeli in Rome at this time) who is beseeching her to intervene and entreat the end of the plague

Faenza’s Beata Vergine delle Grazie emerged during the plague epidemic of 1410, when a woman named Giovanna de’ Costumi prayed to the Virgin for her city’s liberation

The Virgin Mary appeared to her, opened her arms in the manner of the cruciﬁed Christ, and, while breaking the arrows she held in each hand

Hence the posture and the arrows in Poussin`s painting

In Homer's Iliad I, 39, Apollo shoots the arrows of plague at the Greeks for nine days: “with a face as dark as night, and his silver bow rang death as he shot his arrow in the midst of them.”

Apollo's many epithets included “Smintheus,” associated with mice and rats, both as their exterminator, but also as the bringer of the plague.

The mouse in ancient times was a symbol of prophetic power because it was thought mice were inspired by the exhaling coming out of the ground.

Here we see Mary surrounded by clouds or fumes like an Ancient Prophetess prophesying the end of the plague to the saint. No tripod. She dispels the fumes coming from the ground which the ancient sibyls relied on to prophesy. She overcomes the ancient pagan dispensation of evil soothsayers who scurry off stage right

The role of Mary as Prophet is seen in the New Testament in Luke 1:26-55- in the Canticle of Mary at the Visitation


We see it also in Lourdes and Fatima

The scene is set in  imposing architecture marked by classical pilasters framing a large arcade.

The scene is Rome

The figure of the Plague has  the features of the Gladiator carrying a dead child and another, (based on the ancient statues in the Farnese collection now in the  Archaeological Museum in Naples).

As for the reclining woman, she is based on the Baroque statue of   St. Cecilia of Maderno in the Church of Saint Cecilia in Rome, a greatly popular Roman site and shrine

The cult of Faenza becomes a cult of Rome

Mary is seen in her role as the mediatrix of Grace between human and divine. A Jesuit theme and certainly not Jansenist

"As the liturgy and Christian piety demonstrate, the Church has always held devotion to Mary in high esteem, considering it inseparably linked to belief in Christ. It is in fact based on the Father’s plan, the Saviour’s will and the Paraclete’s inspiration."
(General Audience Wednesday, 5 November 1997)

The importance of "popular piety" has always been emphasised by the Church. Pope Francis  wrote in Evangelii Gaudium:

"Popular piety enables us to see how the faith, once received, becomes embodied in a culture and is constantly passed on. Once looked down upon, popular piety came to be appreciated once more in the decades following the Council. In the Exhortation Evangelii Nuntiandi, Pope Paul VI gave a decisive impulse in this area. There he stated that popular piety “manifests a thirst for God which only the poor and the simple can know” and that “it makes people capable of generosity and sacrifice even to the point of heroism, when it is a question of bearing witness to belief”. Closer to our own time, Benedict XVI, speaking about Latin America, pointed out that popular piety is “a precious treasure of the Catholic Church”, in which “we see the soul of the Latin American peoples”.

During the outbreak the Pope, Alexander VII stayed in the Quirinal

In July  1656, most of Romes distinguished artists and architects were invited to take up residence on the barricaded grounds of the Quirinal Palace

And during the plague time Poussin executed another work to Mary: The Annunciation (1657) which is in The National Gallery in London

Some have called it his greatest work 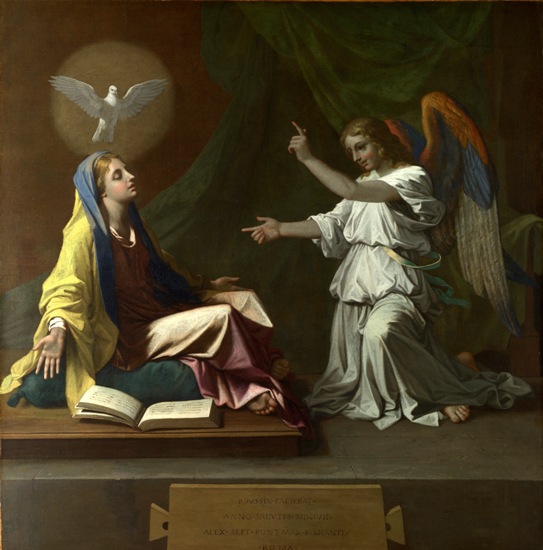 It has been suggested that the picture was intended to hang above the tomb of Poussin's patron, Cassiano dal Pozzo (1588 - 1657), in the church of Santa Maria sopra Minerva, Rome.

Mary has a yellow shawl. Yellow was the colour which the Jews in Rome were compelled to wear at that time to distinguish them from other Romans

Rather ironically, Poussin used "Naples Yellow" (lead antimony yellow) a pigment of unusual origin with a touch of tin for the colour

In the 17th century, Naples yellow was a native earth associated only with Vesuvius and its environs as part of an attempt by makers to throw off how it was made

This is quite definitely a Mary of the Jewish faith

She is reading The Old Testament - the Word of God

She is meditating on it. She is praying

Or as said by Luke, she is pondering

The scene is narrated in Luke:

"In the sixth month the angel Gabriel was sent by God to a town in Galilee called Nazareth,to a virgin engaged to a man whose name was Joseph, of the house of David. The virgin’s name was Mary. And he came to her and said, ‘Greetings, favoured one! The Lord is with you.’ But she was much perplexed by his words and pondered what sort of greeting this might be. The angel said to her, ‘Do not be afraid, Mary, for you have found favour with God. And now, you will conceive in your womb and bear a son, and you will name him Jesus’ (Luke 1.26-31).

We see a Lady filled with Grace, that concept whose discussion led to a rupture in Christendom and whose debates were filled with hate and bitterness spilling over and developing into devastating conflicts which wracked European Christendom in the beginning of the 17th century

The conflagrations and wars were not about Grace but territory and treasure, The material, interest and power not spirit and certainly not about love and service.

In the painting we see Mary is seated like the Seat of Wisdom and over her is the Holy Spirit, that person of the Trinity whose acts are " those in which Love excels"
Perhaps this image brings to mind Scripture:

"Send forth Thy Spirit and they shall be created, and Thou shalt renew the face of the earth" (Ps. ciii., 30).

Unlike one of Fra Angelico`s Annunciations, this Annunciation is a lean spare and powerful statement of the essential meaning of that most mysterious and most important event when Mary assented to the will of God and the countdown to Man`s redemption began