Original Sin and the Immaculate Conception 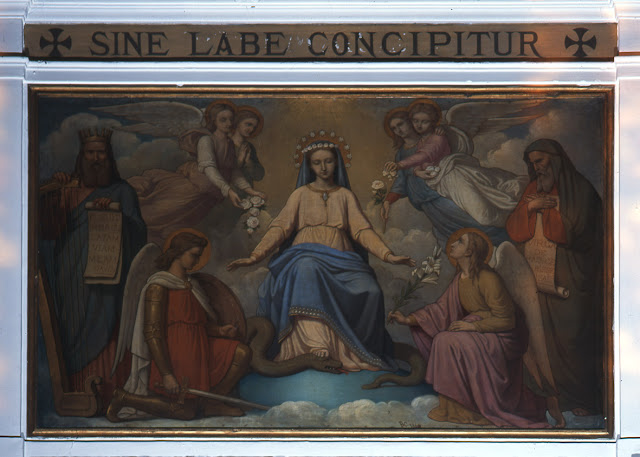 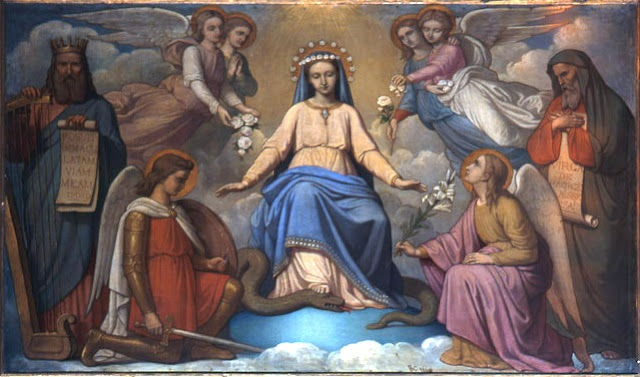 The Virgin is surrounded by David and Isaac, with the Angels Michael and Gabriel kneeling. Four other angels are throwing flowers: lilies and white roses, the symbols of purity but in the case of the roses, also symbols of future pain

Mary is depicted as the second Eve – Eve before the Fall

In Gn 3:15 God said to the serpent after the Fall of Man:

"I will put enmities between you and the woman, between your seed and her seed;  she (he) shall crush thy head and thou shalt lie in wait for her (his) heel"

The Book of Revelation (12:7-9) describes a war in heaven in which Michael, being stronger, defeats Satan

As well as being God`s instrument in The Annunciation, Gabriel is mentioned several times in the Old Testament literature as being one of the chief angels in Paradise, sitting on God`s left hand But it is the angel`s salutation at the Annunciation which we recall in this painting: chaire kecharitomene, Hail, full of grace (Luke 1:28)

“but our Lady's case only differs from his ]St John the Baptist] in this respect, that to her the grace of God came, not three months merely before her birth, but from the first moment of her being, as it had been given to Eve.
But it may be said, How does this enable us to say that she[Mary] was conceived without original sin?

If Anglicans knew what we mean by original sin, they would not ask the question.
Our doctrine of original sin is not the same as the Protestant doctrine.

"Original {48} sin," with us, cannot be called sin, in the mere ordinary sense of the word "sin;" it is a term denoting Adam's sin as transferred to us, or the state to which Adam's sin reduces his children; but by Protestants it seems to be understood as sin, in much the same sense as actual sin. We, with the Fathers, think of it as something negative, Protestants as something positive.
Protestants hold that it is a disease, a radical change of nature, an active poison internally corrupting the soul, infecting its primary elements, and disorganizing it; and they fancy that we ascribe a different nature from ours to the Blessed Virgin, different from that of her parents, and from that of fallen Adam.

We hold nothing of the kind; we consider that in Adam she died, as others; that she was included, together with the whole race, in Adam's sentence; that she incurred his debt, as we do; but that, for the sake of Him who was to redeem her and us upon the Cross, to her the debt was remitted by anticipation, on her the sentence was not carried out, except indeed as regards her natural death, for she died when her time came, as others

All this we teach, but we deny that she had original sin; for by original sin we mean, as I have already said, something negative, viz., this only, the deprivation of that supernatural unmerited grace which Adam and Eve had on their first formation,—deprivation and the consequences of deprivation.

Mary could not merit, any more than they, the restoration of that grace; but it was restored to her by God's free bounty, from the {49} very first moment of her existence, and thereby, in fact, she never came under the original curse, which consisted in the loss of it.

And she had this special privilege, in order to fit her to become the Mother of her and our Redeemer, to fit her mentally, spiritually for it; so that, by the aid of the first grace, she might so grow in grace, that, when the Angel came and her Lord was at hand, she might be "full of grace," prepared as far as a creature could be prepared, to receive Him into her bosom.