St Thomas More and the Duty of Conscience 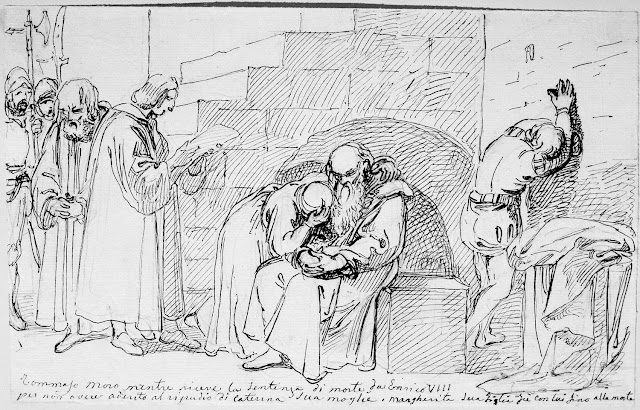 
Bezzuoli was a distinguished Italian Historical painter of the Romantic school. His works can be seen in such places as the Pitti Palace in Florence (The Entry of Charles VIII into Florence, Alessandro il Macedone nello studio di Apelle and others)

He received commissions from Leopold, the Grand Duke of Tuscany

They celebrate freedom and liberty. But not licence and civil disorder

The movement of which he was a progenitor became known as   i macchiaioli. Some of his works are shown in the Galleria d'Arte Moderna

The villa where he lived in Fiesole is still there. It is still called Villa Bezzuoli

But here we see a scene utterly divorced from Italian history but a scene which had great resonance throughout Europe at the time which it represents and thereafter.

Father and daughter are supporting and comforting each other while the  sentence of death is formally pronounced on the father. His wife has indicated that she has disapproved of his lonely decision to abide by the dictates of conscience rather than other considerations. She is not present.

There is a Lear-like quality to the work.

We do not see the handsome and vigorous More of the paintings of Holbein the Younger
.
We see a man who has been in confinement in the Tower to wear him down over a very long period. The authorities played "Cat and Mouse" to wear down his resolve and resolution.

They intended to break him. The King`s will was to be done. The monarch was quite convinced of his correctness and rectitude. He would not brook any disobedience.

More stands alone in defence of his conscience. Outwardly you might think that by his appearance and surroundings the convicted man appears vanquished. Outwardly the King appears to have triumphed over his supposed opponent.

From Bezzuoli`s composition, we do not see the political ideologue buoyed by a sense of self-righteousness. we see a man who must have repeated often the words of Scripture during his ordeal:


"My Father, if it is possible, let this cup pass from Me; yet not as I will, but as You will."

Why did  Bezzuoli not make the work into a painting ? Perhaps in his day the subject would have been too controversial and subject to misinterpretation.

The Bonapartes were dethroned from the Grand Duchy adter the Congress of Vienna in 1815. The old regine was re installed. Italian Unification was in the ascendant. Cavour, Mazzini, Garibaldi, the anti-clericals Liberals and the other mixed assortments were members of the broad Coalition which favoured Unification.

What the Church and other religious authorities meant by "Conscience" was entirely different from what "Conscience" meant when used in philosophical and political circles.

The confusion is still very much apparent today.

For Newman "conscience is the “Voice of the Lawgiver”. Following one`s conscience means "following the voice of God"

He cited with approval the statement of Cardinal Gousset who said:

"The Divine Law ... is the supreme rule of actions; our thoughts, desires, words, acts, all that man is, is subject to the domain of the law of God; and this law is the rule of our conduct by means of our conscience.

Hence it is never lawful to go against our conscience; as the fourth Lateran Council says, 'Quidquid fit contra conscientiam, ædificat ad gehennam.'"

"This [Divine] law, as apprehended in the minds of individual men, is called "conscience;" and though it may suffer refraction in passing into the intellectual medium of each, it is not therefore so affected as to lose its character of being the Divine Law, but still has, as such, the prerogative of commanding obedience. ...

This view of conscience, I know, is very different from that ordinarily taken of it, both by the science and literature, and by the public opinion, of this day. It is founded on the doctrine that conscience is the voice of God, whereas it is fashionable on all hands now to consider it in one way or another a creation of man ...

When Anglicans, Wesleyans, the various Presbyterian sects in Scotland, and other denominations among us, speak of conscience, they mean what we mean, the voice of God in the nature and heart of man, as distinct from the voice of Revelation. They speak of a principle planted within us, before we have had any training, although training and experience are necessary for its strength, growth, and due formation. They consider it a constituent element of the mind, as our perception of other ideas may be, as our powers of reasoning, as our sense of order and the beautiful, and our other intellectual endowments. They consider it, as Catholics consider it, to be the internal witness of both the existence and the law of God. They think it holds of God, and not of man, as an Angel walking on the earth would be no citizen or dependent of the Civil Power. ...

When men advocate the rights of conscience, they in no sense mean the rights of the Creator, nor the duty to Him, in thought and deed, of the creature; but the right of thinking, speaking, writing, and acting, according to their judgment or their humour, without any thought of God at all.

They do not even pretend to go by any moral rule, but they demand, what they think is an Englishman's prerogative, for each to be his own master in all things, and to profess what he pleases, asking no one's leave, and accounting priest or preacher, speaker or writer, unutterably impertinent, who dares to say a word against his going to perdition, if he like it, in his own way.

Conscience has rights because it has duties; but in this age, with a large portion of the public, it is the very right and freedom of conscience to dispense with conscience, to ignore a Lawgiver and Judge, to be independent of unseen obligations.

It becomes a licence to take up any or no religion, to take up this or that and let it go again, to go to church, to go to chapel, to boast of being above all religions and to be an impartial critic of each of them.

Conscience is a stern monitor, but in this century it has been superseded by a counterfeit, which the eighteen centuries prior to it never heard of, and could not have mistaken for it, if they had. It is the right of self-will."

See also: Blessed John Henry Newman, Chapter 5. Apprehension and Assent in the matter of Religion in An Essay in aid of a Grammar of Assent (1870)