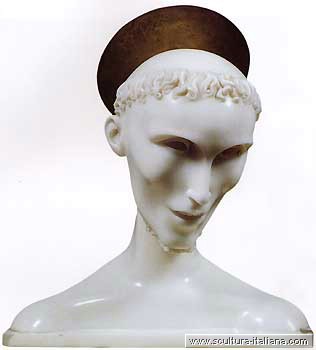 
One hundred years ago Umberto Beningni wrote an article on the ancient Italian town of Rieti which predates the birth of Christ. It is about 100 km north of Rome

At the time of the article the diocese of Rieti  contained "60 parishes, 142,100 inhabitants, 250 secular priests, 7 religious houses with 63 priests, 15 houses of nuns; 2 educational establishments for boys, and 4 for girls."

The situation is somewhat different now

But the diocese still thrives in today`s modern and difficult conditions and the Diocese and town have an impressive Diocesan Museum.

As befits an ancient Christian area it has the remains of all the great Christian movements which ran through the Church through all those times.

One of the great influences still apparent and which is being fostered is the connection with St Francis of Assisi. He  came for the first time around 1209 and then returned for a long stay in 1223 and again from Autumn 1225 to April 1226.

One highlight is the town of Greccio. Giovanni, Lord of the Castle of Greccio, helped the saint in preparing the Crèche of Greccio, the first Nativity crib

The Sanctuary of Fontecolombo on Mount Rainiero is called by some the Franciscan Sinai. It is where Saint Francis wrote the Rule of the Franciscan Order.

Works by Cimabue, Antoniazzo Romano, Caravaggio, Alessandro Magnasco, Francesco Podesti, Duilio Cambellotti and  Adolfo Wildt, on a Franciscan theme will all be on show

All of this is of course for a holy purpose, the same purpose which the Church has throughout the centuries endeavoured to do: to inspire people to imitate the Seraphic Father.

In 1926, for the 700th Anniversary of the death of St Francis, Pope Pius XI issued an Encyclical on the Life and Works of St Francis.

In it he said:

"there is presented to Our soul, or better still We can almost see with Our very eyes, the great throngs of pilgrims who will visit Assisi and the other nearby sanctuaries of verdant Umbria, the rocky crags of Verna, the sacred hills that look out on the valley of the Rieti, all spots where Francis seems to live on teaching even now the lesson of his virtues, from which places the pious pilgrims can scarcely return home without being more and more filled with the Franciscan spirit.

To quote Leo XIII: "Concerning the honours that are being prepared for St. Francis, it should be borne in mind that, above all, these honours will be agreeable to him to whom they are given only when they have been made fruitful by the one who actually offers them. In this then alone can We hope for lasting fruits, when those men who admire his great virtues seek to copy in some way this man, and in imitating him make themselves better." (Encyclical Auspicato, 17 Sept. 1882) "
(Pope Pius XI, Rite Expiatis 30th April 1926)