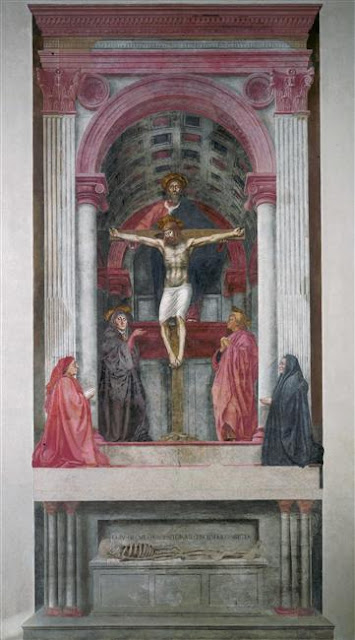 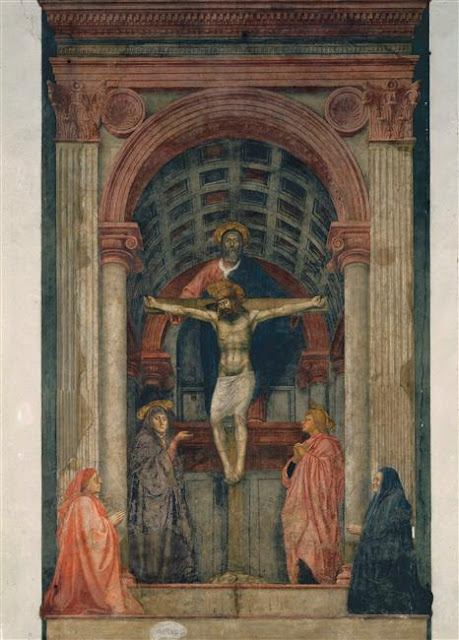 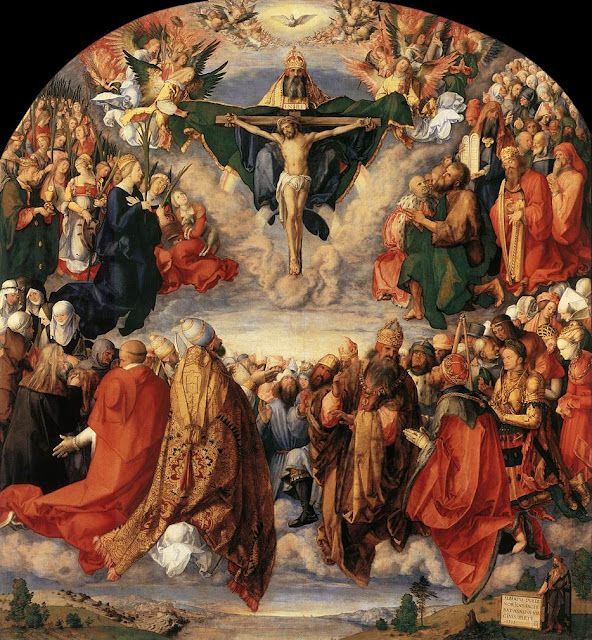 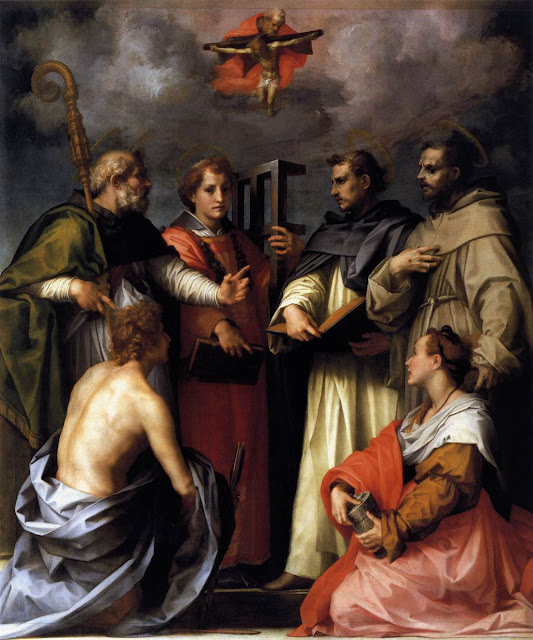 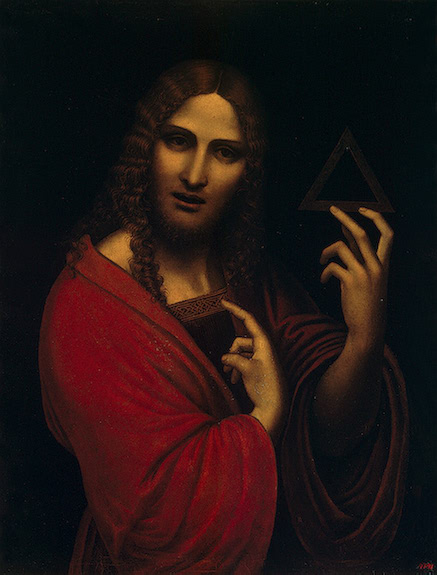 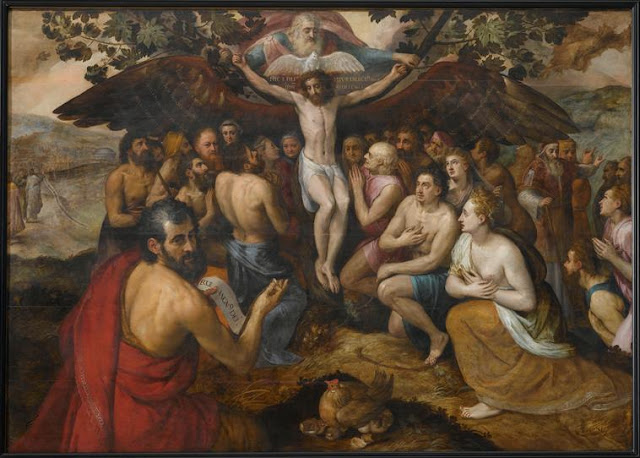 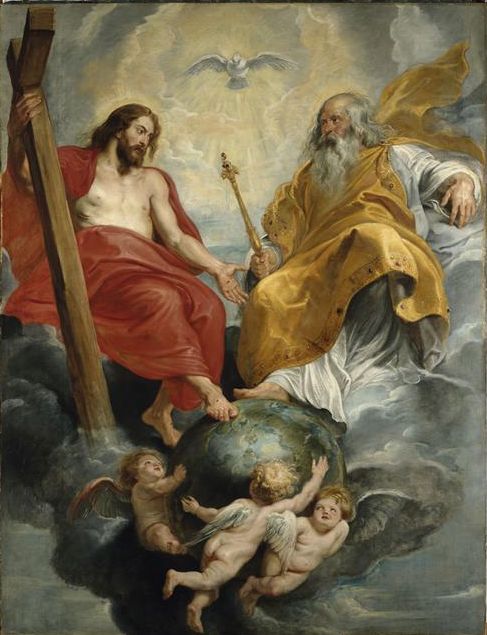 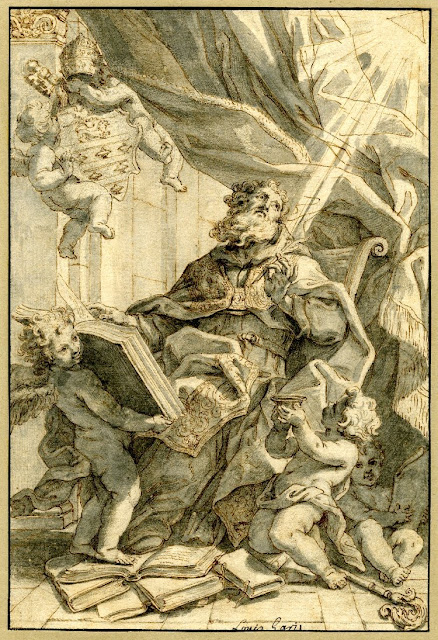 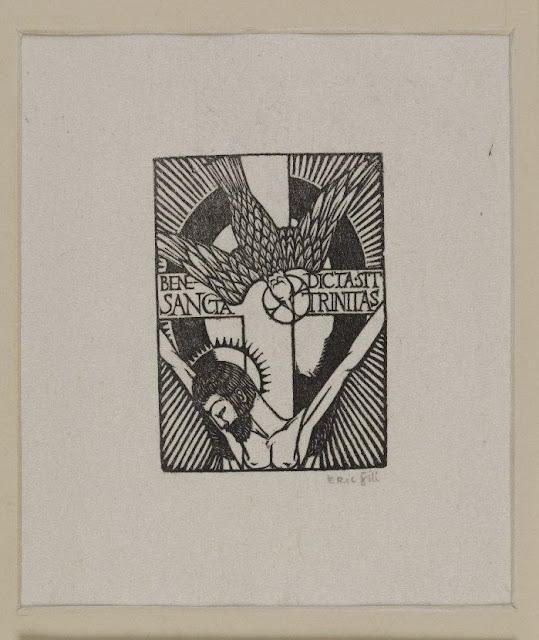 Eric Gill 1882 - 1940
The Trinity ("BENEDICTA SIT SANCTA TRINITAS")
1914
Wood-engraving
65 millimetres x 46 millimetres
The British Museum, London
The importance of the Doctrine of the Trinity and the Nicene Confession or understanding of the Trinity can be seen from the following quotations:

"The faith of all Christians rests on the Trinity." (St. Caesarius of Arles, Sermo 9)

"There is no subject where a mistake is more dangerous, or the search more laborious, or discovery more advantageous than the unity of the Trinity: of the Father, the Son and the Holy Spirit." (Saint Augustine, De Trinitate I.III.5)

"The whole of human knowledge comes to fruition in knowledge of the Trinity. For every science and every thing to which the mind applies itself is looking for that which gives us happiness. Speaking about other things is only worthwhile when it derives from and guides us to this search." (Saint Albert the Great, I Sent. d. 2, a. 6–7)

"The whole of our life bears fruit and comes to achievement in the knowledge of the Trinity." (St Thomas Aquinas, I Sent. d. 2, exp. text)

"For since we confess the Father, the Son, and the Holy Spirit to be one God, they [heretics] demand to know: How can there be one God, and how can they be three Persons?
And to the first question, we answer that: they are one through their essence or deity; so there must also be some abstract terms whereby we may show that the persons are distinguished: these are the ‘properties’ or ‘notions’, that is, abstract terms like ‘paternity’ or ‘filiation’.
Therefore, the divine essence is signified as What (quid), the person as Who (quis); and the property as Whereby (quo)." (St Thomas of Aquinas, Summa Theologica, I, q. 32, a. 2.)

From Matins of the Feast of the Holy Trinity

From Vespers of the Feast of the Holy Trinity

The Nicene confession constitutes the foundation of the professions of faith of all the different Christian denominations. It is the foundation of the later discussions and commentaries on the Doctrine.
It was confirmed at subsequent ecumenical councils
The oneness of God in the Trinity of Persons is still proclaimed and asserted. It is not regarded as the product of the culture of its time in the fourth century. It cannot be "updated" to reflect the culture of its time. Indeed the dogma of Nicaea was an intentional affirmation even although it was contrary to the cultural vision of the time it was enunciated.
For an example of how important the Trinity is to the Church see the CDF`s Notification on the book "Jesus Symbol of God" by Father Roger Haight S.J.(December 13, 2004) written by the then Cardinal Ratzinger and affirmed by Blessed Pope John Paul II
See also The Vatican Muzzles the Jesuit Roger Haight. And Jesus Is Why
Posted by Unknown at 9:53 am