The Island that Nurtures Saints 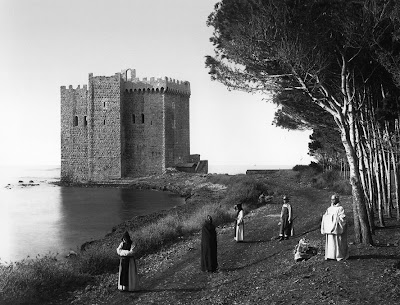 In the sixth century, Ennodus of Pavia called it « An island that nurtures saints. »

The island he was referring to was the Island of Saint-Honorat off the coast of Cannes in the South of France.

Between 400 and 410 the monk Saint Honoratus, along with Saint Caprais and a few other companions, settled on the island in search of solitude.

Apart from Saracen invasions, the island was continuously inhabited by monks in a monastery.

However in 1787 at the time of the French Revolution, the Isle of Saint-Honorat was confiscated, became property of the nation and sold to Marie-Blanche Alziary de Roquefort, an actress with the Comédie Française.

But in 1859. Saint-Honorat was purchased by Monsignor Jordany, Bishop of Fréjus, who shortly afterwards asked Dom Barnouin, who had reinstated the Cistercian community of Sénanque, to re-establish a religious community on the island. And in the 1870s . the Cistercian Congregation of the Immaculate Conception transferred to the island, which is today the property of the Congregation de Sénanque.

The celebrated photographer of the Pays Niçois , Jean Gilletta 1856-1933 took the above photograph. (date unfortunately unknown)

Credit to Gibbon which is a fascinating and utterly enthralling blog.
Posted by Unknown at 9:19 pm