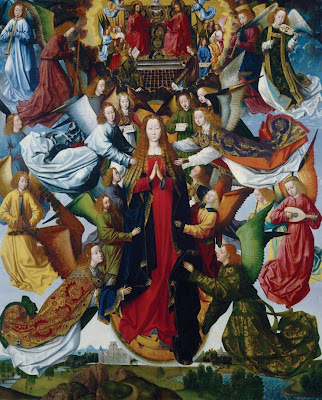 The work was made for the convent of Santa Clara in Medina de Pomar, Burgos (of the order of the Poor Clares)

The painting was commissioned earlier by Doña Beatriz Manrique, countess of Haro, whose husband, Don Pedro Fernández de Velasco, Count of Haro and Constable of Castile (c. 1425-1492). was the founder of the convent. His daughter, Doña Leonor, was the Abbess of the convent. The convent was suppressed by the State in the nineteenth century

It was to be the main altarpiece of the funerary chapel in which the countess and count of Haro were to be buried. The Chapel was the the chapel of the Immaculate Conception. The Chapel was begun in 1460.

Doña Beatriz bought the painting in Flanders for a considerable sum of money (thirty thousand maravedies).

The iconography — an Assumption, Coronation and an Immaculate Conception - in a single panel is original.

The apocalyptic attributes surrounding the Virgin refer to the Feast of the Immaculate Conception, the liturgy that Doña Beatriz had ordered to be performed in her memory, probably in front of the altarpiece.

This music, which is the source of the painting's title, has been identified as derived from a setting of the Marian antiphon, Ave Regina Caelorum, by Walter Frye (d. 1474/1475), an English composer whose works were popular on the Continent.

The painting is an exceptionally important document in the history of music. The painting portrays Renaissance instruments with great accuracy: a tenor or alto shawm, a precursor of the English horn; a Gothic harp; a brass trumpet; a portative organ; a vielle, an early form of violin; a soprano or treble shawm, a distant forerunner of the oboe; a lute; three recorders; a dulcimer being struck by a light hammer; and a harp.

The words and music of Ave Regina Caelorum, by Walter Frye can be seen and listened to in the December 9, 2007 Chicago Early Music Consort Performance of ‘Rejoice & Be Merry - an Early Music Christmas.’