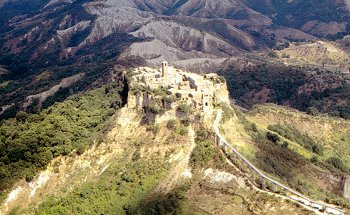 Bagnoregio: Birthplace of St Bonaventure, and where his last remaining relics lie

Zenit has an article on the Doctoral Thesis of Pope Benedict XVI written in 1957.

Its subject was: St. Bonaventure's theology of history

Father Pietro Messa, director of the Antonian Pontifical University `s faculty of medieval and Franciscan studies states that to understand the papacy of Benedict XVI, one should become familiar with his formation as a theologian

Regarding the role of Father Ratzinger's thesis in Benedict XVI's pontificate, Father Messa said, "There are many elements in this study that could have a correspondence in the magisterium of the Pontiff," such as the centrality of Christ, supported by St. Bonaventure and fully present in the papal magisterium.

"Beginning from this study and the issue of the relationship between the local Churches and the universal Church, which played such a big role in postconciliar ecclesial debate, and of which one of the protagonists was Cardinal Joseph Ratzinger, Father Congar wrote: 'Joseph Ratzinger, who has noted, we believe justly, some differences between Bonaventure and Thomas, gives a lot of importance to the role that the pope plays in Bonaventurian mysticism due to the Franciscan influence.'"

Taking that into account, Father Messa affirmed: "The question of if and in what way this Franciscan aspect characterizes his conception and exercise of the papacy is more than legitimate.

"Reading some of his writings and speeches, the hypothesis of a 'yes' answer is reinforced. Thus it is not surprising, rather it is fully understandable, that according to Benedict XVI, in order to understand the Petrine ministry, one has to return to St. Francis."

Cardinal Ratzinger himself discussed his thesis in a Nov. 13, 2000, address to the Pontifical Academy of Sciences, saying his study of the 13th century theologian uncovered untold aspects about the relationship of the saint "with a new idea of history."

In that discourse, Cardinal Ratzinger explained that in the 12th century, Joachim of Flora offered a hypothesis of history "as a progression from the period of the Father -- a difficult time for human beings under the law -- to a second period, that of the Son -- with a greater freedom, more frankness, more brotherhood -- to a third, the definitive period of history, the time of the Holy Spirit."

"According to Joachim," added Cardinal Ratzinger, "this should be a time of universal reconciliation, of reconciliation between the East and the West, between Christians and Jews, a time without laws -- in the Pauline sense -- a time of true brotherhood in the world.

The interesting idea I discovered was that a significant current of the Franciscans were convinced that St. Francis of Assisi and the Franciscan Order marked the beginning of this third period of history, and it was their aspiration to make it a reality. Bonaventure maintained a critical dialogue with this current."

Father Ratzinger's work, emphasized Father Messa, "has been resumed by numerous studies regarding the theology of St. Bonaventure, as the bibliographical references included at the end of this publication indicate, and this certainly shows its importance in Bonaventurian studies."

"Thanks also to this text," he added, "the research has been able to advance and some conclusions have been outdated, both because of the progress in the research and because currently we can benefit from many more critical works than those used by Ratzinger in 1957."

For more about St Bonaventure, see:

part of The Franciscan Archive which has sections on Biographies, Articles on his life and works, his Writings and on Works of Art relating to the Saint.