The Banning of the Stations of the Cross 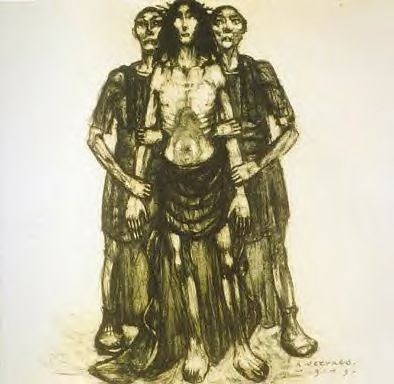 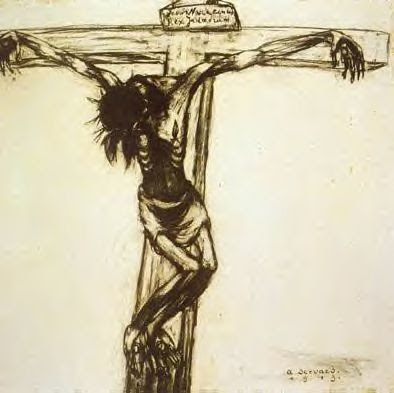 Servaes was responsible for a renewed interest in ecclesiastical art in Belgium.

His Stations of the Cross of Luithagen (1919; Tilburg, Abbey of Onze-Lieve-Vrouw) consists of 14 charcoal drawings on white paper; the skeleton-like figures are boldly sketched and harrowing in their expressiveness.

Yet this Expressionist style was condemned by the Roman Catholic Church in 1921, and as a result most of Servaes’s religious works were removed from Belgian churches.

These meditations on the passion stand wholly in this tradition of the vivid use of the imagination in order to evoke the reality of Jesus' sufferings. The details of his thoughts are underscored by the artist's black on sepia drawings

The grim expressionist statement of the theme brought home with extra force the horrific nature of the crucifixion.

Servaes was also an important landscape painter, notably of harvest and snow scenes, which were widely imitated in the first half of the 20th century.

In 1944 he moved to Switzerland, where he produced numerous mountain scenes, as well as portraits and religious subjects, executed primarily in pastel and in an Expressionist style.


In the following passage written in 1924, Jacques Maritain discussed the banning of the Stations of the Cross by the Church:

"Sacred art is in absolute dependence upon theological wisdom.

In the signs it presents to our eyes something infinitely superior to all our human art is manifested, divine Truth itself, the treasure of light that was purchased for us by the blood of Christ. It is above all for this reason, because the sovereign interests of the Faith are at stake in the matter, that the Church exercises her authority and magisterium over sacred art.

I recalled a moment ago the decree of Urban VIII of March 15, 1642, and the prescript of the 25th session of the Council of Trent. There are other instances. On June 11, 1623, the Congregation of Rites proscribed crucifixes representing Christ with arms updrawn. On September 11, 1670, a decree of the Holy Office forbade the making of crucifixes "in a form so coarse and artless, in an attitude so indecent, with features so distorted by grief that they provoke disgust rather than pious attention."

And you know that in March, 1921, the Holy Office forbade the exhibition in churches of certain works of the Flemish painter Servaes.

Here is a point that merits all our attention. Servaes is a painter of great talent, a Christian full of faith, and one can only speak of his person with respect and affection; I am happy to bear testimony to him here. The Stations of the Cross which raised such violent commotion in Belgium gave birth to deep religious emotions in certain souls, nay more, brought about conversions. Nevertheless the Church condemned it, and it is never difficult, even when the appearances and the human procedures disconcert us, to understand the wisdom and justice of the Church's decisions.

In spite of himself, assuredly, and not in his soul but in his work, the painter, fascinated by the Ego sum vermis et non homo of Isaias and conceiving his Stations as a pure vertigo of grief, happened to be false to certain theological truths of capital importance -- above all the truth that the sufferings as well as the death of Our Lord were essentially voluntary, and that it was a divine Person who suffered the most appalling human suffering: the pain and agony of His Humanity were handled by the Word as the tool with which He performed His great work.

At the same time, for those who cannot harmonize the poor figurations that art places before their eyes and the pure image living in our hearts of the most beautiful of the children of men (in Him, as in His Mother, as Cajetan reminds us in his treatise De Spasmo beatae Virginis, the supreme torments of Calvary, though piercing the mind still more cruelly than the body, left reason intact under the Cross, in full exercise of its dominion over the sensitive part) -- for these, I say, certain plastic deformations, a certain degenerate aspect of the contour, take on the value of an offense against the Humanity of the Saviour, and, as it were, of a doctrinal misapprehension of the sovereign dignity of His soul and body.

At a time when the truth of the Faith is threatened on all sides, why be surprised that the Church is more concerned than ever about the doctrinal distortions that can be implied in certain works of art intended for the faithful, whatever may be in other respects their aesthetic value and the salutary emotions they may here or there excite, and whatever may be the piety, faith, depth of spiritual life, and uprightness of intention of the artist who produced them?

May I be permitted however to add that from this same point of view of dogma the base sentimentality of so many commercial products must equally vex sound theology, and is doubtless tolerated only as one of those abuses to which we resign ourselves for a time, considering human weakness and what may be called, adapting a phrase of Holy Writ, "the infinite number of Christians with bad taste."

This ultimate control by theology that I just mentioned, and which presupposes in the artist a true theological culture, clearly does not impose on sacred art any aesthetic genre, any style, any particular technique.

We must, however, realize that it communicates to it, as it were spontaneously, certain general directions. Thus the intrinsic characteristics of the object represented have assuredly for sacred art a very special importance: not, certainly, from the point of view of the naturalist imitation of material detail and picturesque appearance, which is more out of place and execrable here than elsewhere, but from the point of view of the laws of intellectual signification.


If one reflects on the essential deficiency of the means of expression of human art in relation to the divine mysteries to which these means are applied, on the terrible difficulty of expressing in a sensible matter truths that bridge heaven and earth and unite the most opposite realities, one is even led to think that sacred art, however rich it ought to be in sensibility and humanity, in order to attain to a certain spiritual fullness will doubtless always have to retain something of the hieratic and, so to speak, ideographic symbolism, and, in any event, of the sturdy intellectuality of its primitive traditions."