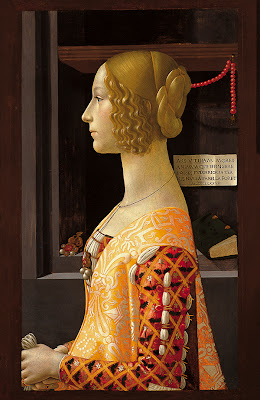 Giovanna degli Albizzi married Lorenzo Tornabuoni on 15 June 1486. Born in 1468, she died in childbirth after two years of marriage, aged 20 years. It is possible that the image was made after her death, as a kind of monument.

J. Pierpont Morgan, who kept it in the study of his library in New York City, doted on it because it reminded him of his own dead wife, Amelia Sturges.

There is an almost identical portrait by Ghirlandaio of Giovanna in the Fresco of the Visitation in the Cappella Tornabuoni in Santa Maria Novella, Florence.

The portrait is set into a black background which contains a niche with various objects which refer to the sitter's refined tastes and to her character.

The jewel with its dragon with two pearls and a ruby which forms a set with the pendant hanging from a silk cord around her neck, is an allusion to her public life.

The brooch is complemented by the prayerbook and a string of coral beads which has been identified as a rosary, both objects included in order to emphasise the piety and spiritual life of the sitter.

The coiffeur, the very latest in the fashions of the 15th century, included a shaved forehead make her face seem longer. By painting her in profile, Ghirlandaio has brought to the fore the richly decorated silk brocade that offsets her elegant dress, which in turn is embellished by her precious pendant of gold and white pearls.

In the late 15th century the principal features that comprise ideal female beauty are: blond hair, large eyes, long neck, long legs, and an ample bosom. She has these attributes.

The ideal beauty used to portray Giovanna Tornabuoni, along with other portraits of this date, is based on theoretical principles and on examples taken from Antiquity.

The piece of paper on the wall behind Giovanna's shoulder states:

Art, if you were able to represent the costumes, character and soul,
There would not be a more beautiful painting on earth.

The sentence comes from the poet Martial, (XXXII) who lived the 1st century BC. The meaning is clear: Ghirlandaio seems to excuse himself to Giovanna and the viewer for the fact that he is not able to better represent the quality of her soul and character, an extremely gracious compliment.

On the scroll ornament in the background there is also the date "MCCCCLXXXVIII". (1488)
Posted by Unknown at 8:01 pm