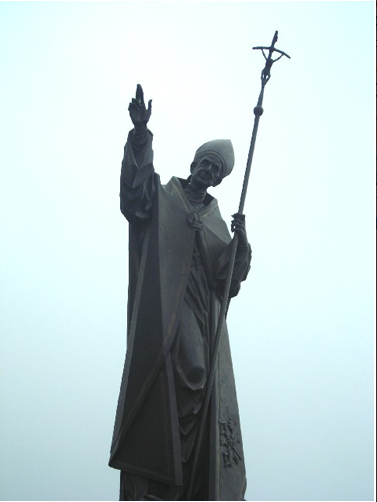 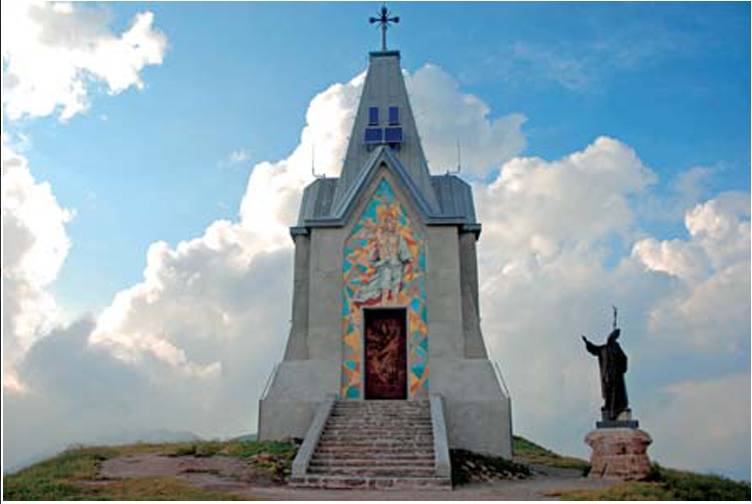 In 1902, Giorgio Montini, the father of Blessed Pope Paul VI, constructed the monument to the Redeemer (above) on the top of Monte  Guglielmo near Brescia

The monument was restored and despite its age, the weather and its very exposed position it still stands, lonely and against the hostile elements

The statue to the now beatified Pope Paul VI stands beside his father`s monument (above).

In his homily at the Mass for the Beatification of Pope Paul VI, Pope Francis said:

"In his humility the grandeur of Blessed Paul VI shines forth: before the advent of a secularized and hostile society, he could hold fast, with farsightedness and wisdom – and at times alone – to the helm of the barque of Peter, while never losing his joy and his trust in the Lord."

Papa Montini died in 1978. In his Audiences of that year you can detect that he knew the end was coming but he was not afraid. Unfortunately the addresses are only in French, Spanish  and Italian on the Vatican website

Likewise with his homilies

His last homily was on 29th June 1978 on the fifteenth anniversary of his election as Pope, on the Feast of Saints Peter and Paul. It reads like a farewell address.

He said that he had two accomplishments: the Protection of the Faith; and the Defence of Human Life

As regards the latter, he cited Gaudium et Spes 51:

"God is the  Lord of life and has entrusted to men the noble mission of safeguarding life!"

Of Humanae Vitae ,  he again repeated that the transmission of human life is a most serious role in which married people collaborate freely and responsibly with God the Creator.

The defence of human life is inextricably linked to Christian marriage:

"Hence the repeated statements of the doctrine of the Catholic Church on the painful realities and very painful effects of divorce and abortion, which are contained in our ordinary magisterium and in particular acts of the competent Congregation. We have them expressed, moved only by the supreme responsibility of the teacher and of the universal shepherd, and for the good of mankind!"

In the popular mind, Humanae Vitae is about contraception. It is not. It is an encyclical on Christian marriage and the defence of human life in all its forms

At the heart of Humanae Vitae is the following statement:

"[Married] love is above all fully human, a compound of sense and spirit. It is not, then, merely a question of natural instinct or emotional drive. It is also, and above all, an act of the free will, whose trust is such that it is meant not only to survive the joys and sorrows of daily life, but also to grow, so that husband and wife become in a way one heart and one soul, and together attain their human fulfillment.

It is a love which is total—that very special form of personal friendship in which husband and wife generously share everything, allowing no unreasonable exceptions and not thinking solely of their own convenience. Whoever really loves his partner loves not only for what he receives, but loves that partner for the partner's own sake, content to be able to enrich the other with the gift of himself.

Married love is also faithful and exclusive of all other, and this until death.

This is how husband and wife understood it on the day on which, fully aware of what they were doing, they freely vowed themselves to one another in marriage. Though this fidelity of husband and wife sometimes presents difficulties, no one has the right to assert that it is impossible; it is, on the contrary, always honourable and meritorious. The example of countless married couples proves not only that fidelity is in accord with the nature of marriage, but also that it is the source of profound and enduring happiness."