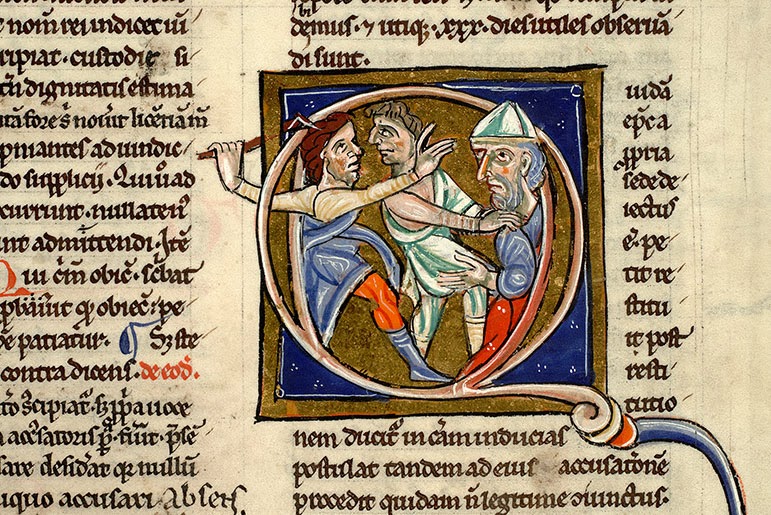 Mistreatment of bishops has always been popular in the Catholic Church

Among some laity, bishop bashing has always been a popular sport

Nowadays physical maltreatment is not preferred. It tends to be more verbal rather than using one`s hands, fists or feet. But that too has a long tradition as in below. 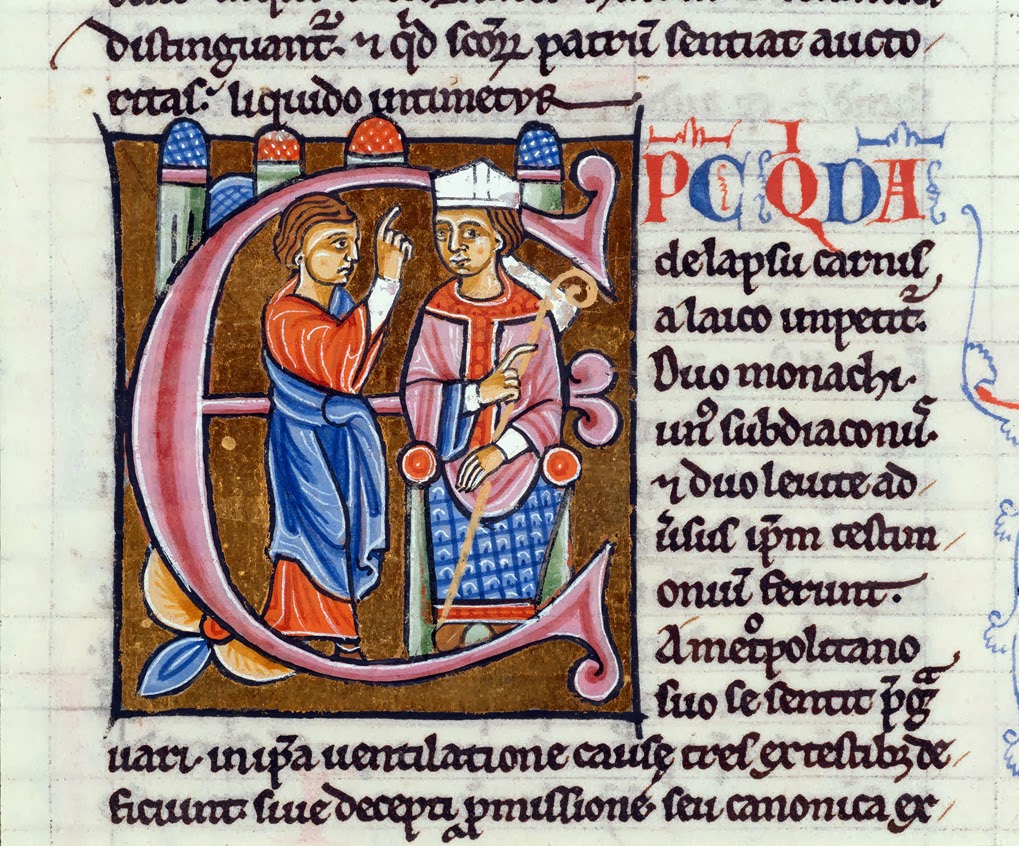 A Bishop accused of sins of the flesh by a member of the laity
Initial E of Chapter 2
From Gratian Decretals
12th century
Illuminated manuscript
f. 083, ms. 0103
Bibl. Municipale, Troyes 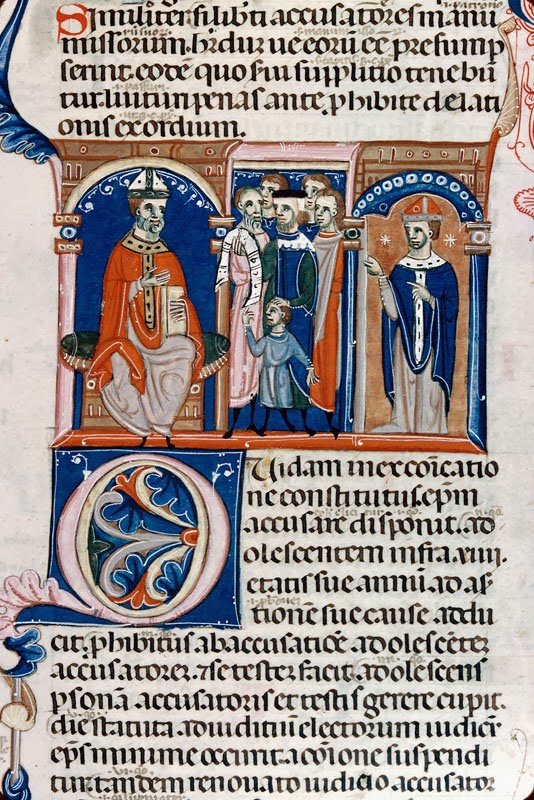 Bishop accused by an excommunicated person and a child
Miniature at the beginning of Chapter 4
From Gratian Decretals
c. 1300
Illuminated manuscript
f. 117, ms. 0678
Bibl. Municipale, Reims


It obviously is now part of the job description for bishops: wear protective clothing. Presumably at the induction courses for new bishops there are advanced classes in turning the other cheek

The most recent example is the reaction of certain parts of the Catholic blogosphere to  a recent letter sent by the Bishop of Fort Worth, the Most Rev. Michael Olson, to the President of Fisher More College.

Some of the comments made about the bishop have been untrue, unfair, vicious and personally abusive and offensive

The views of Doctor Taylor Marshall who has first hand knowledge of the situation are to be greatly welcomed.

Pope Leo XIII in Depuis le jour (1899) had some harsh and trenchant words for this type of behaviour on the part of the clergy which should be recalled as they are just as applicable to the laity. They are words written well before Vatican II and note also the reference to the not exactly "liberal" encyclical Mirari Vos :

"32. Listen, then, to the words addressed by St. Ignatius, the great martyr of Antioch, to the clergy of the primitive Church:

"Let all obey their Bishops, as Jesus Christ obeyed His Father. In all things touching the sense of the Church do nothing without your Bishop, and as our Lord did nothing but in close union with His Father, so priests, do you nothing without your Bishop. Let all members of the priestly body be united, as all the strings of a harp are united in the instrument." (S. Ign. Ant. Ep. ad Smyrn. 8; idem. ad Magn. 7; idem. ad Ephes. 4.)

33. Should you, on the contrary, act as priests independently of this submission to and union with your Bishops, we would repeat to you the words of our predecessor, Gregory XVI, viz., that "you utterly destroy, as far as in you lies, the order established with a most wise forethought by God, the author of the Church." Encyclical epistle, Mirari vos, August 15, 1832.

34. Remember, too, beloved sons, that the Church is rightly compared to an army in battle array "sicut castrorum acies ordinata," because it is her mission to combat the enemies, visible and invisible, of God and men's souls. Wherefore did St. Paul recommend Timothy to bear himself "as a good soldier of Jesus Christ?" Now, that which constitutes the strength of an army and contributes most to its victory is discipline and the exact and rigorous obedience of all toward those in command.

35. Just here zeal out of place and without discretion may easily become the cause of real disaster. Call to mind one of the most memorable facts of sacred history. Certainly neither courage, willingness, nor devotion to the sacred cause of religion were lacking in those priests who gathered round Judas Maccabeus, to fight with him against the enemies of the true God, the profaners of the temple, the oppressors of their nation.

And yet, releasing themselves from the rules of discipline, they rashly engaged in a combat in which they were vanquished. The Holy Spirit tells us of them "that they were not of the race of those who might save Israel." Why? Because they would obey only their own inspirations, and threw themselves forward without awaiting the orders of their leaders.

36. On this point our enemies may serve us for an example. They are well aware that union is strength, "vis unita fortior," so they do not fail to unite close when it comes to attacking the holy Church of Jesus Christ.

37. If, then, you desire, as you certainly do, beloved sons, that in the formidable contest being waged against the Church by anti-Christian sects and by the city of the evil one, the victory be for God and His Church, it is absolutely necessary for you to fight all together in perfect order and discipline under the command of your hierarchical leaders.

Pay no heed to those pernicious men who, though calling themselves Christians and Catholics, throw tares into the field of the Lord and sow division in His Church by attacking and often even calumniating the Bishops "established by the Holy Ghost to rule the Church of God." Read neither their pamphlets nor their papers.

No good priest should in any way lend authority either to their ideas or to their license of speech. Can he ever forget that on the day of his ordination he promised "obedientiam et reverentiam" to his Bishop before the holy altar?"