The Baptism of St Augustine 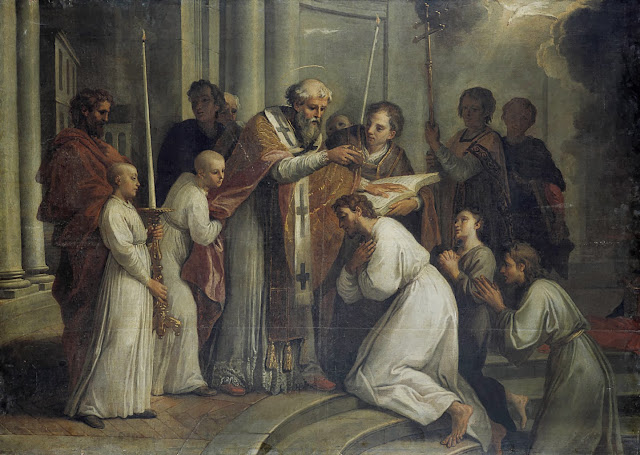 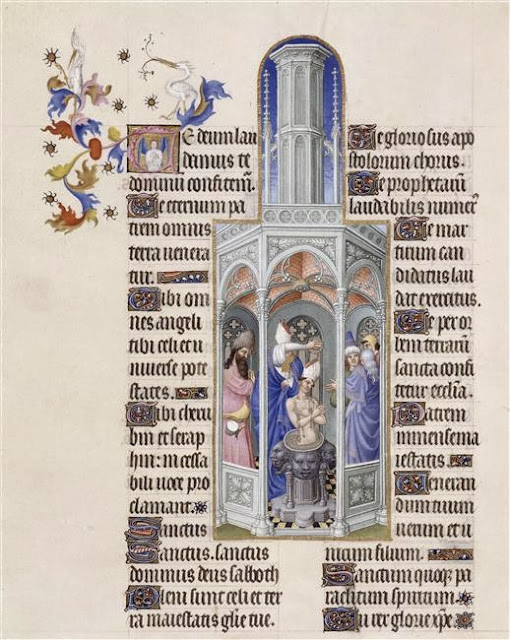 "This very night it will be 1625 years ago that the future Church father Augustine from Hippo in North Africa was baptised in the North Italian city of Milan by its Nicene Christian bishop Ambrose. [at Easter 387]

In those days Christian baptism was an extensive ceremony.

Its preparations started weeks before the actual baptism took place. A person who would like to receive baptism should first ‘turn in his name’ (the so-called nomen dare) to be inscribed by the Church official, who as a rule, was the bishop.

After that he received an extensive catechetical instruction.

We do not know the exact rites of the Church of Milan at the time of Augustine, but from two works by Ambrose, his so-called On the Sacraments (De sacramentis) and On the Mysteries (De mysteriis) we seem to be able to reconstruct how baptism was administered in 387.

It was accompanied by rites such as a washing of feet (symbolising the forgiveness of sins, a symbol dear to Ambrose), anointments, the laying on of hands, and so on. Also, the newly baptised person received the sign of the cross on the forehead: from then onwards he belonged to Christ.

This sign was originally an X, derived from the old-Hebrew sign of Tau already mentioned by the prophet Ezekiel (ch. 9), and also in St John’s Apocalypse . This sign was considered a mark of property and protection. ...

[T]he adult Augustine, by then 32 years old, was immersed in ‘living’ (that is: flowing) water.
This immersion took place three times, after he had heard three questions: ‘Do you believe in God the Almighty Father?’; ‘Do you believe in our Lord Jesus Christ and his cross?’; ‘Do you also believe in the Holy Spirit?’ and after that he subsequently answered three times: ‘Credo, I believe!’ (Ambrosius De sacramentis 2, 20; cf. Ambrosius De mysteriis 21; 28).

It was not only Augustine who was baptised that day. His companion Alypius and his son Adeodatus , aged 15 years, also received the sacrament that day beside St Augustine

""And so we were baptised .... What tears I shed in your hymns and canticles! How deeply was I moved by the voices of your sweet singing Church. Those voices flowed into my ears and the truth was distilled into my heart, which overflowed with my passionate devotion. Tears ran from my eyes and happy I was in those tears."

One set of works were the seven books entitled On Baptism, Against the Donatists

On Merit and the Forgiveness of Sins, and the Baptism of Infants