The Vision of St. Bernard 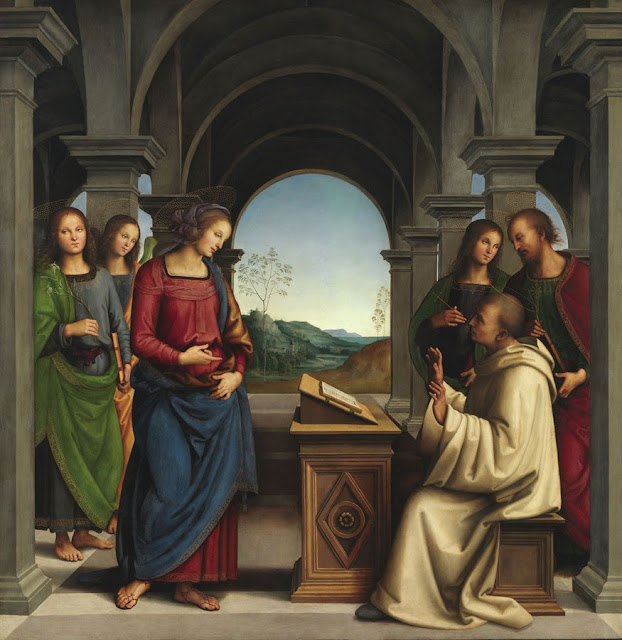 The work was commissioned  for a family chapel of the Nasi in the then Cistercian church Santa Maria Maddalena di Cestello in Florence. It was one of the most important altars in the church. It was the chapel immediately to the right of the High Altar

Then the Church was known as  Santa Maria Maddalena delle Convertite. After the canonisation in 1669 of Maria Maddalena de' Pazzi, it was dedicated to the Florentine Carmelite saint whose order had by then taken over the running of the complex

Mary appears in ordinary clothes. There is a dream like quality to the work. Apart from St Bernard and the Virgin, the other figures represent angels and saints. All, apart from halos, appear to be ordinary people.

Behind Mary are two angels. One of the angels is staring out at the viewer, the classic example of how the viewer comes to be engaged into the image.

Behind St Bernard are Saints Bartholomew and Philip

On the right of the panel there would have been depicted three figures of the Nasi family. They would be looking also at the vision of Mary.

The setting is a cloister, presumably Cistercian. The landscape is Umbrian, the homeland of Perugino.

The cloister is framed by Gothic arches and columns. Everything is in classical harmony

Despite the monumentality of the work, the image is not static. Mary is moving forward. She is pointing. St Bernard is off centre. He is obviously rather startled by the vision. And by the message of the Virgin. Is he really capable of taking it all in ?

The colours are luminous and bright but not loud.

There is an underplayed quality to the depiction which somehow makes it much more emphatic and memorable.

It is a completely different work to that of Filippino Lippi in the Badia in Florence, an impressive and popular work in its time which spawned many imitations 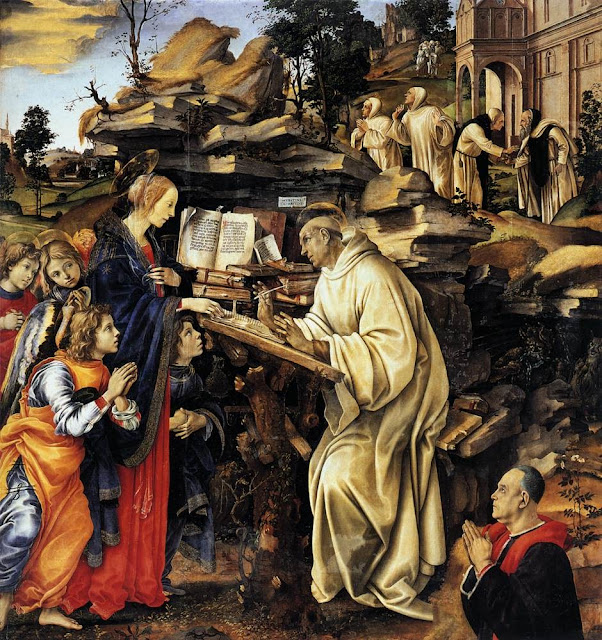 
And of course it was meant to be different

The words being written by St Bernard have particular significance in the painting. He is writing a commentary on the words of St Luke: Super missus est (the passage on The Annunciation)

It is a complex image filled work steeped in learning and in the humanist tradition.

Perugino`s painting shows no words only a vision, a meeting. For Perugino, words are superfluous and inadequate to describe the scene. There are no monks apart from St Bernard himself. This is a real and personal encounter between Mary and St Bernard. She is speaking directly to him.

St Bernard and we are invited to imitate Mary and accept the commission of God: to consent and accept what God wants of us in the same way that Mary did at the Annunciation. The emphatic and irrevocable "yes" to the call of the Word

Geoffrey of Auxerre, William of Saint Thierry, and Arnaud de Bonneval  all wrote portions of the Vita Prima, a book dedicated to Bernard’s devotion to monastic life in the church. The Vita Prima describes nine visions that  Saint Bernard experienced, including one in which the Virgin appeared to him while he was writing a sermon

For St Bernard the Virgin Mary  acted as the intercessor between man and God or Christ. Bernard was impressed by her acceptance of the Incarnation and felt her virtue made her worthy of emulation

St Bernard of Clairvaux  was and is associated with asceticism and reform. As well as founding an Order of Reform, he gave valuable directions for the reform of all levels of hierarchy in the Church.

Florence had a particular devotion to St Bernard

Dante chose Bernard as the last guide to the heavenly vision of Mary in The Divine Comedy: Paradiso

Petrarch dedicated a chapter of De Vita Solitaria to Bernard

In Melinda Kay Lesher`s The Vision of Saint Bernard and the Chapel of the Priors: Private and  Public Images of Bernard of Clairvaux in Renaissance Florence, Columbia University PhD, 1979,
Copyright 1981, University Microfilms International, Ann Arbor, MI, there is a fascinatig and detailed study of the theme of the Vision of Mary to St Bernard in Renaissance art

The vision of Saint Bernard is a theme almost unique to Florence and rarely seen outside Tuscany during the Renaissance.

Lesher’s research documents the  theme’s popularity from 1490-1530 in Florence, but she found no examples of the theme painted in Florence from the 1530s until the seventeenth century

It is surely no coincidence that one year after Perugino painted his work a certain Fra Savonarola became the Prior of San Marco and his sermons tapped a vein in the religious psyche of Renaissance Florence.

This was no ordinary vein. It was a lodestone. As in all reform movements, Savonarola was merely the catalyst for a movement which took hold of the city like a  whirlwind
Posted by Unknown at 10:12 am