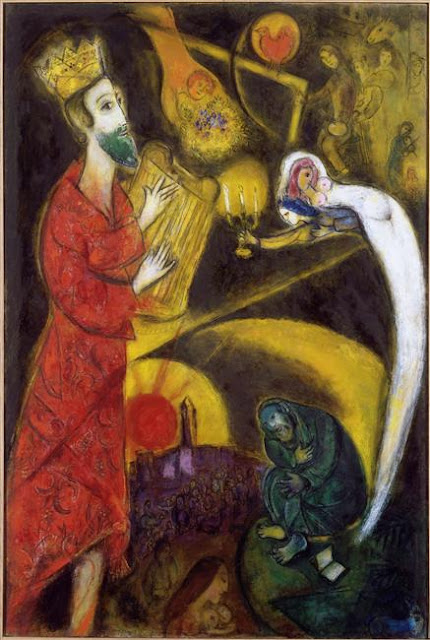 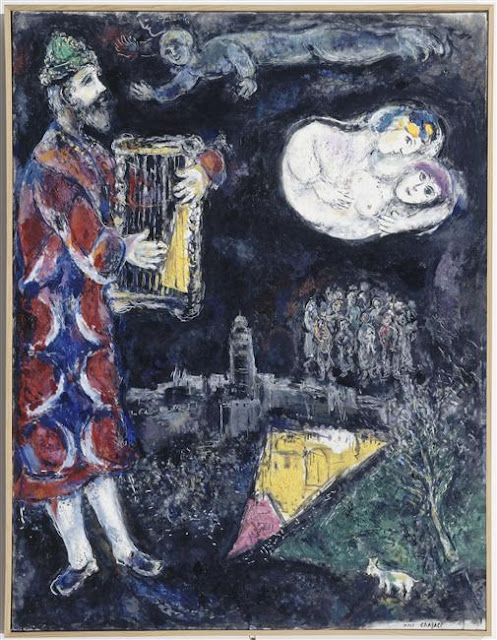 Marc Chagall (1887-1985)
La Tour de David
1968-1971
Oil on canvas
1.17 x 0.9 m
Musée national Message biblique Marc Chagall, Nice
As well as the reputed author of many of the Psalms, David was Israel’s first successful king. He united all of the Israelite tribes, became the effective ruler over all, and was the founder of an enduring dynasty
His royal line or House became a primary symbol of the bond between God and the nation. The king was the mediator between God and his people.
David conquered Jerusalem and made it the city of Israel. Israel’s God was named Y-hw-h. David made this name the supreme name for deity in Jerusalem (previously perhaps “Salem”), to indicate his conquest of the city.
He brought the Ark of the Covenant to Jerusalem where it became the sign and embodiment of God`s presence among his people.

O Clavis David, et sceptrum domus Israel;
qui aperis, et nemo claudit;
claudis, et nemo aperit:
veni, et educ vinctum de domo carceris,
sedentem in tenebris, et umbra mortis.
O Key of David and sceptre of the House of Israel;
you open and no one can shut;
you shut and no one can open:
Come and lead the prisoners from the prison house,
those who dwell in darkness and the shadow of death