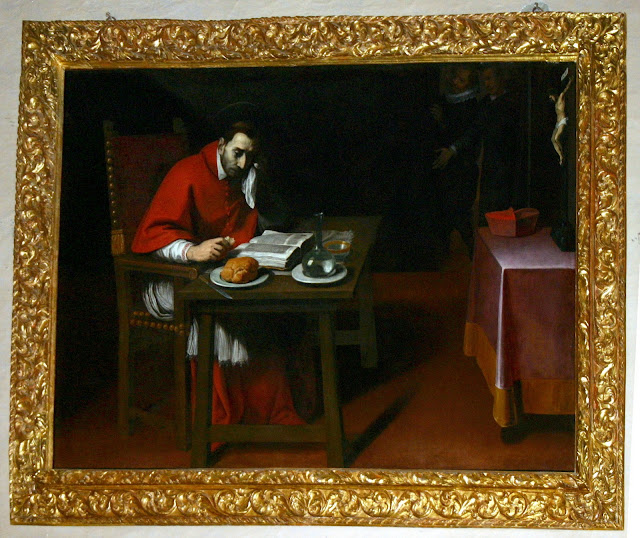 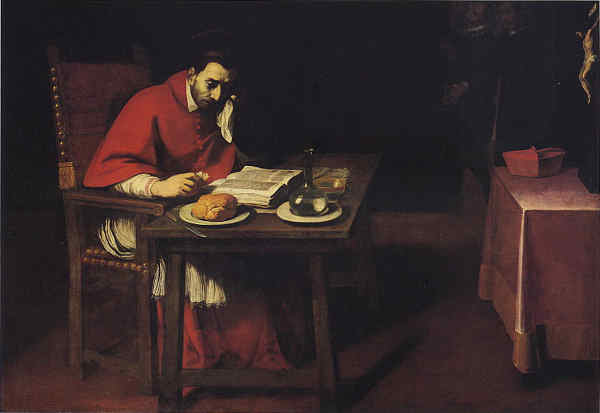 Daniele Crespi (1597 - 1630)
Il Digiuno di San Carlo Borromeo / The fasting of St Charles Borromeo (c. 1625)
Oil on canvas
Chiesa di Santa Maria della Passione, Milan
The single most famous painting of the Lombard Seicento and a masterpiece of Seventeenth century Italian painting is of St Charles Borromeo (2 October 1538 – 3 November 1584) (above)
It is a remarkable painting.
It was commissioned by St Charles`s successor as Cardinal Archbishop, his cousin, Federico Borromeo (18 August 1564 – 22 September 1631)
The Church of Saint Mary of the Passion was first constructed in the 1480s. However it was St Charles Borromeo when Cardinal Archbishop who began the reconstruction and renovation of the Church which is its present state.
It was a painting of the Saint painted after he had been canonised in 1610
The work is composed totally in accordance with the presriptions of sacred art laid down by the Fathers of the Council of Trent. Those same prescrptions of sacred art upheld by both St Charles and his cousin Federico but from different perspectives.
The painting emphasises his simplicity of life, and his devotion to learning and to prayer.
It is an austere work reflecting the ascetic nature of the saint. Beside the Crucifix is the symbol of his high office as a Prince of the Church: his cardinal`s hat.
But the saint is seated at a plain wooden table. He is fasting on bread and water. He often so fasted. He died fasting. His face is long, wan and pale. He suffers physical privation. He is reading a weighty tome. In front of him is a large crucifix. He is concentrating on what he is reading. He is crying. He often wept when overcome reading the Passion of Our Lord.
Unknown to him he is being watched by two men in black. He is wrapt in concentration in his reading. He does not notice them
The figure of St Charles emerges from the darkness with the force of a powerful and intense light.
It is an intense and lifelike work wrought by an artist still in his twenties but was to die at the tragically young age of 33 years in the Great Plague of Milan in 1630
St Charles is portrayed as a model of the active Christian contemplative, efficient and able as an administrator, filled with a spiritual divine Love compelled to perform great charitable works in a society under occupation.
At that time Milan and its Duchy was rule by Spain. It had a Spanish Governor. Charles, a Milanese, an Italian, was the Ecclesiastical power but in accordance with the Spanish rule firmly under the domination of Spain.
He lived only 46 years, dying horribly of tuberculosis. But recognising his own vocation at an early age and acting on it, throwing himself totally into it, he achieved an immense amount which appears almost superhuman. His role as one of the main players at the Council of Trent and his putting into practice the edicts of the Council in his own Archdiocese were works and achievements of more than one lifetime.
It is in this painting by Crespi that we come to get more than a glimpse of the great soul that was St Charles Borromeo
And so it is that Pope Benedict XVI in his Letter commemorating the four hundredth anniversary of the Canonisation of the saint tries to sum up something of this man who was a spiritual Colossus.
The key to the achievement of the man was his own spiritual reform and renewal:
Pope Benedict XVI said:

"In a period obscured by many trials facing the Christian community, with divisions and doctrinal confusion, the clouding of the purity of faith and custom, and the bad example of many sacred ministers, Charles Borromeo did not limit himself to deploring and condemning, nor simply to expressing hope that others would change; rather, he began to reform his own life".

The Pope went on to say that during the episcopate of St Charles, the huge vast diocese of Milan became suffused with a torrent of sanctity which conquered the whole Christian peoples within the teriitory. The Pope asks how did he manage to entrance and conquer his people.
He answers it: St Charles lit up and entranced them with the burning of his Love, a divine Love which was a living and real experience. He brought to them the Face of God which attracted them and made them his.
The Love which St Charles had and exhibited was the Love of the Good Shepherd.
That Love still burns today and is still remembered and commemorated and celebrated.
This year the solemn Pontifical Mass commemorating the event was celebrated by the present Cardinal Archbishop of Milan (Tettamanzi), all the bishops of Lombardy, 250 priests and 5000 of the faithful within the Cathedral of Milan. It was an impressive occasion and centred around the preserved body of the Saint.
For a video of the Mass in the Cathedral of Milan see:
http://www.chiesadimilano.it/or4/or?uid=ADMIesy.main.index&oid=2620942
In the apse lies the body of the saint within the elaborate glass container. See below: 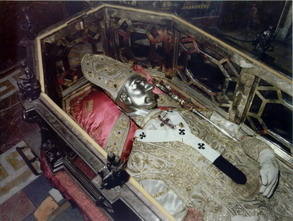 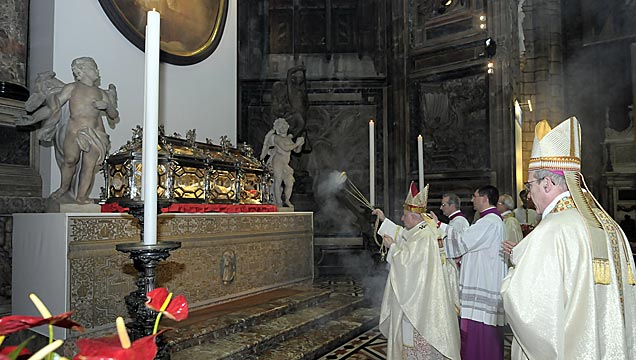 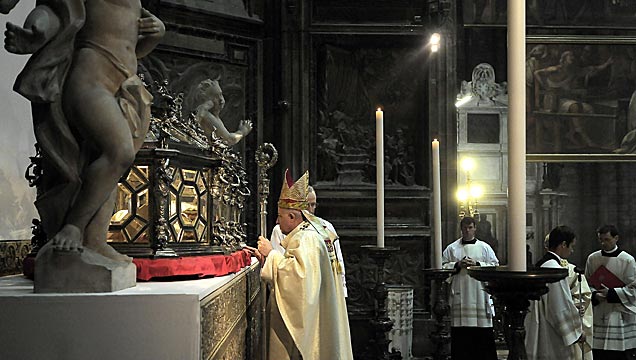 The paintings hanging from the walls of the Cathedral along the Nave are a series of canvases ("teloni") with Scenes from the Life of St Charles and the Miracles of St Charles (made 1602-1610). They were commissioned by Cardinal Federico Borromeo to celebrate the beatification of the Saint in 1602 and the canonisation in 1610. They were painted by Giovanni Battista Crespi (known as "Il Cerano" and the brother of Daniele Crispi) and Giulio Cesare Procaccini
The "taloni" are only exhiibited from 4th November to 6th January in each year
Posted by Unknown at 10:17 pm