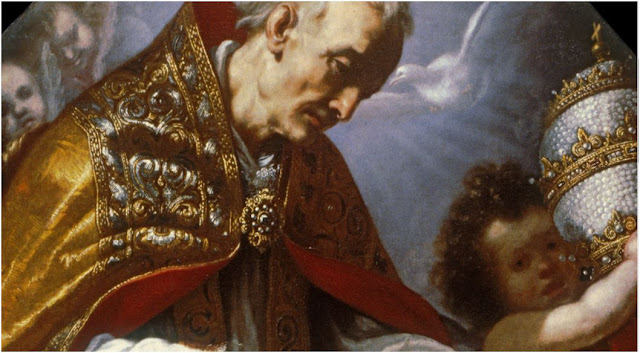 Jacopo Vignali (1592-1664)
Detail of St Gregory the Great c.1630
Oil on canvas
128.27 x 106.05 cm
The Walters Art Museum, Baltimore
In the run up to the Papal Visit we commemorate this week St Gregory the Great. The commemoration is quite apt. Without St Gregory, there would have been no St Augustine and no mission of St Augustine to Britain
In Britain the Church is one of the spiritual children of St Gregory (as indeed is Western Europe).
Christianity would probably have reached Britain even if there had been no mission to Britain by Augustine at the command of Gregory. But then there is the question "What if ...?"
What if Gregory had not so commanded and there had been no mission by Augustine to Britain ? Would not the whole course of British history have been completely different ?
Gregory is one of the few Pontiffs to merit the title "Magno", "Great".
Another of the "Great" Popes, Pope John Paul II considered (22nd October 2003) why his predecessor St Gregory should be designated "Great" in this extract from a talk to commemorate the 1400th anniversary of the death of St Gregory:

"I would like here to emphasize certain aspects of his personality that I consider particularly important.
Gregory was the son of an old Roman family which had long been Christian.
The atmosphere of his home and the education he received enabled him to become familiar with the heritage of the different branches of knowledge and of classical literature.
As an attentive researcher of the truth, he realized that the patrimony of classical antiquity, in addition to that of the Christian heritage, was a valuable basis for subsequent scientific and human development.
Still today, his insight has retained its full value for the future of humanity and, especially, of Europe. Indeed, it is impossible to build the future by ignoring the past. ...
Another significant feature of St Gregory the Great was his commitment to shedding light on the primacy of the human person, considered not only in his physical, psychological and social dimensions but also in constant reference to his eternal destiny. This is a truth on which today's world should focus greater attention if it wishes to build a world with deeper respect for the multiple needs of every human being.
St Gregory the Great has often been called "the last of the Romans".
Indeed, he had deep roots in the city of Rome, its people and its traditions. As Supreme Pontiff, he never lost sight of the Orbis Romanus. Not only did he take care of the part of the Roman Empire, Byzantium, that he knew well due to his long stay in Constantinople, but he extended his pastoral care to Spain, Gaul, Germany and Britain, all of which were then part of the Roman Empire.

Motivated by exemplary zeal to spread the Gospel, he encouraged an intense missionary activity which expressed a Roman spirit purified and inspired by the Gospel, no longer concerned with asserting political power but keen to bring the saving message of Christ to all peoples.

The great Pontiff's inner disposition is evident in the directions he carefully imparted to the Abbot Augustine, whom he sent to Britain: he explicitly asked him to respect the customs of those peoples, as long as they did not conflict with the Christian faith.

Thus, Gregory the Great, in addition to fostering the missionary concern that was inherent in his ministry, made a crucial contribution to the harmonious integration of the various peoples of Western Christendom.

Consequently, the witness of this distinguished Pontiff lives on as an example for us too, Christians of today who have only recently crossed the threshold of the third millennium and look confidently to the future. To build a future of serenity and solidarity, it is right to turn our gaze to this true disciple of Christ and to follow his teaching, courageously presenting anew to the contemporary world the saving message of the Gospel. Indeed, it is only in Christ and in him alone that human beings of every epoch can find the secret to the total fulfilment of their most essential aspirations"