Officials in the United Kingdom mock the Pope 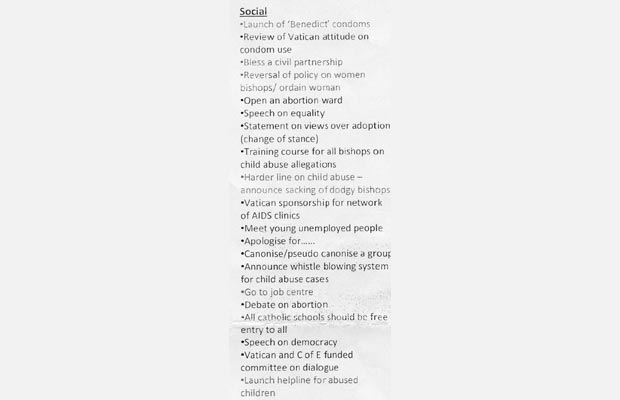 Official Memorandum regarding the Pope`s visit to the United Kingdom in September 2010
Before the Pope`s visit to the United Kingdom in September, officials have to plan. It is, after all, a State Visit. However one does expect that since they are employed in the service of the State, they would approach the task with  a degree of professionalism and not as if they are members of a  fourth form secondary class. Regrettably it would appear that there may be some civil servants in rather high positions who have an extremely juvenile sense of humour and lack the professionalism for which the British civil service was always admired and respected.
The Sunday Telegraph has  published official documents written by officials responsible for the British Government planning for the Papal visit. Considering that there are very delicate consideratons to be taken into account to ensure that the Visit is a success or at least does not pass with a serious incident, one would have expected that they would be of a very high quality. However ...
Amongst the documents are a memorandum (above) which ridiculed Church teaching on abortion and other matters
The suggestions for events for the pope`s visit  included the Pope opening an abortion ward; spending the night in a council flat in Bradford; doing forward rolls with children to promote healthy living; and even performing a duet with the Queen; that the Pope should reverse the Church’s "policy on women bishops/ordain woman"; and that the Vatican should "sponsor a network of Aids clinics".
The Foreign Office issued a public apology after being approached by The Sunday Telegraph, while Francis Campbell, the UK ambassador to the Vatican, met senior officials of the Holy See to express the Government’s regret.
The "ideal visit" list was circulated within Whitehall by a junior Foreign Office official, an Oxbridge graduate in his 20s.
In an emailed memo dated March 5, headed "Policy planning ahead of the Pope’s visit", he invited senior colleagues to attend an "inter-faith meeting" the following week to discuss themes for the visit.
Attached to the memo were three "background documents", including the "ideal visit" list, which he said would form the basis of discussions. He added in the memo: "Please protect; these should not be shared externally. The ‘ideal visit’ paper in particular was the product of a brainstorm which took into account even the most far-fetched of ideas."
Recipients included Nicola Ware, a senior Foreign Office official, as well as officials at 10 Downing Street, the Department for International Development, and the Northern Ireland Office.
The exercise appears to have been intended to ensure a high impact for the papal visit and to identify areas such as development and climate change on which the Government and the Vatican could co-operate, but the list of ideas has caused offence.
Another of the three background documents, titled "Papal Visit Stakeholders", lists figures and groups that the officials consider significant to the tour, and ranks them in order of how "influential" and "positive" each one is perceived to be.
The Queen, David Cameron, and Tony Blair are all ranked as highly influential and positive. It rates Susan Boyle, the singer, as more influential than Vincent Nichols, the Archbishop of Westminster


It is of course a bit of fun gone wrong. It was not quite a brain storming session which was responsible as a complete mental collapse.

However one does wonder if there are some officials who would be quite happy to see the forthcoming Papal visit turn out to be a fiasco and are not really working to ensure that it will be successful. One hopes that this was simply one official going "off his rocker" and not a sign that the forthcoming visit is going to turn out to be a headache not only for the church but also for the British state.
Posted by Unknown at 9:47 pm