Giovanni Bellini and St Francis in the Desert 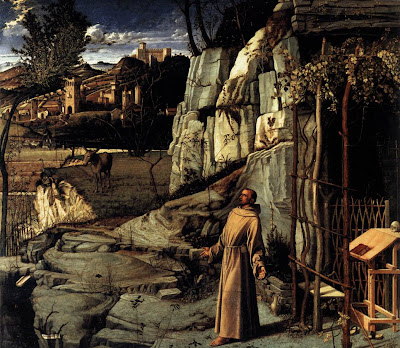 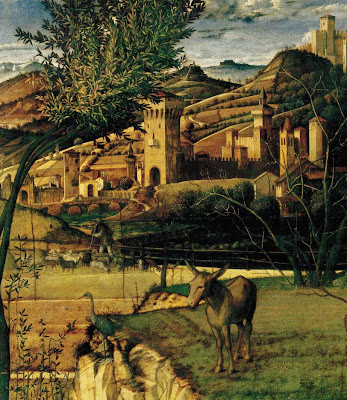 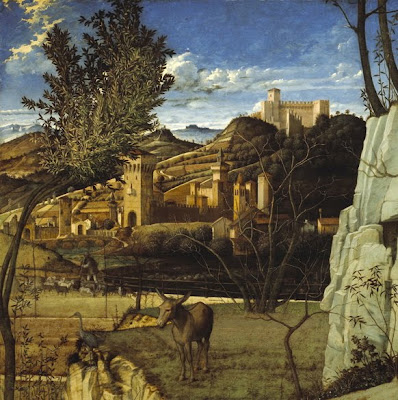 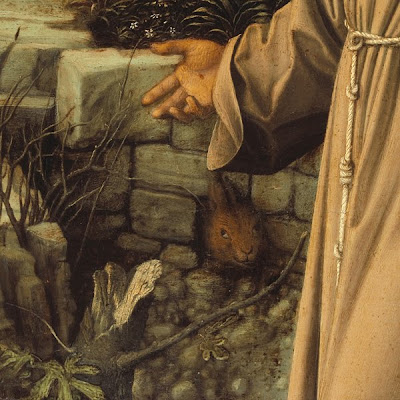 Oil and tempera on poplar panel

During the early Renaissance, the cult of saints became "more intense and passionate" than ever throughout Europe

Bellini's portrayals of St. Francis and St. Jerome were among the first examples of the subject, in which the theme of solitude is created through a physical division from the external world

St. Francis of Assisi (1181/82–1226), founder of the Franciscan order, is believed to have received the stigmata — the wounds of Christ's Crucifixion — on 14th September 1224 (the Feast of the Exaltation of the Cross) during a thirty day retreat in preparation for Michelmas on Mount Alverna in the Apennines. The locale of the landscape was specified by Bellini as Alverna, which was the mountainous retreat Francis had sought for prayer and contemplation.

On 8 May 1213 St Francis had received the mountain of La Verna (Alverna) as a gift from the Count Orlando di Chiusi who described it as “eminently suitable for whoever wishes to do penance in a place remote from mankind” The mountain was one of his favourite retreats for prayer.

A witness to the event of the stigmata was Brother Leo. He stated that St Francis saw a vision of a seraph, a six-winged angel on a cross who gave him the gift of the stigmata. There is no seraph. There is no Brother Leo. The sun assumes the function of the Seraph-Crucifix. Natural beauty and lightand St Francis are sufficient to describe the divine.

Contrast Caravaggio`s treatment of the same subject. Caravaggio did away with the solid landscape and focussed only on the saint and the angel that comforts him. The ecstasy is over and he has swooned into the angel's arms. A divine light illuminates the two figures, while all else is in darkness

The animals, birds, persons, plants, objects such as the skull and sandals, and strange rock formations yield hidden meanings for those who understood their importance in Franciscan literature.

On the left is an immobile donkey which can be interpreted as a symbol of humility and patience, but also of laziness, stupidity or obstinacy. On the right, on a table, is a skull, representing death.

The water trickling from a spout in the stones at left, for example, is compared to the miraculous fountain Moses brought forth from the rocks at Horeb, and the empty sandals behind the barefoot saint recall God's command to Moses to “put off the shoes from thy feet: for the place whereon thou standest is holy ground.”

The quivering tree at upper left, shining in the mysterious light, may be intended to recall not only the Cross but also the burning bush of Moses’ vision at Mount Horeb.

The wilderness — or desert — of Mount Alverna is compared in early Franciscan sources to the desert of the Book of Exodus, and Moses and Aaron were seen by the Franciscans as their spiritual ancestors, who were believed to have lived again in their founder

St Francis leaves behind him the cave, with its darkness and dry skull recalling death. His face shows excitement, if not utter shock, but his open arms indicate a welcoming acceptance. He gestures with one hand toward the peeping rabbit, with the other to a water jug. The velvety sunlight sharply etches the anatomy of his cheeks and lights up his face.

The saint has turned away from solitude and death to embrace life. In the process he finds the marks of death on his physical body, but underneath each mark lie new signs of life

Anthony F. Janson in his article The Meaning of the Landscape in Bellini's "St. Francis in Ecstasy", Artibus et Historiae, Vol. 15, No. 30 (1994), pp. 41-54 proposed that the landscape shows the Heavenly Jerusalem, a motive which originated in the North, although it is patterned loosely after Assisi. The cave serves to identify the saint with Jerome, so that it acts as the vehicle of salvation well in advance of Bosch and Patinir. While the scene has multiple resonances of meaning, Janson further suggested that the likely subject is St. Francis seeking inspiration from the heavens as he is about to compose the "Canticle of the Sun" at San Damiano

The Canticle of the Sun, also known as the Laudes Creaturarum ("Praise of the Creatures"), is a religious song composed by Saint Francis of Assisi. It was written in the Umbrian dialect of Italian but has since been translated into many languages.

Saint Francis is said to have composed most of the canticle in late 1224 while recovering from an illness at San Damiano, in a small cottage that had been built for him by Saint Clare and other women of her order

An English translation of the Canticle follows:

Most high, all powerful, all good Lord!

All praise is yours, all glory, all honor, and all blessing.

To you, alone, Most High, do they belong.

No mortal lips are worthy to pronounce your name.

Be praised, my Lord, through all your creatures,

especially through my lord Brother Sun,

who brings the day; and you give light through him.

And he is beautiful and radiant in all his splendor!

Of you, Most High, he bears the likeness.

Be praised, my Lord, through Sister Moon and the stars;

in the heavens you have made them bright, precious and beautiful.

Be praised, my Lord, through Brothers Wind and Air,

and clouds and storms, and all the weather,

through which you give your creatures sustenance.

Be praised, My Lord, through Sister Water;

she is very useful, and humble, and precious, and pure.

Be praised, my Lord, through Brother Fire,

through whom you brighten the night.

He is beautiful and cheerful, and powerful and strong.

Be praised, my Lord, through our sister Mother Earth,

who feeds us and rules us,

and produces various fruits with colored flowers and herbs.

Be praised, my Lord, through those who forgive for love of you;

through those who endure sickness and trial.

Happy those who endure in peace,

for by you, Most High, they will be crowned.

Be praised, my Lord, through our Sister Bodily Death,

from whose embrace no living person can escape.

Woe to those who die in mortal sin!

Happy those she finds doing your most holy will.

The second death can do no harm to them.

Praise and bless my Lord, and give thanks,

and serve him with great humility.

Solitude was essential for Francis to attain "a state of divine contemplation" and to maintain an intimate relationship with things of creation. And his contemplative life was most successfully achieved when he was away from the community and alone amid the natural surroundings.

Millard Meiss points out in his monograph (Giovanni Bellini's St. Francis in the Frick Collection (Princeton, N.J.: Princeton University Press, 1964), pp. 20-21 on the painting, the landscape simply represents St. Francis 'in the wilderness," a place to test and cleanse the Christian soul