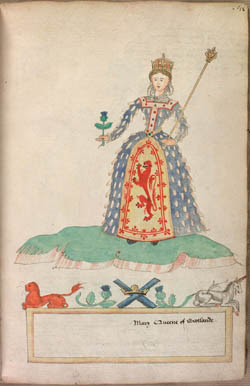 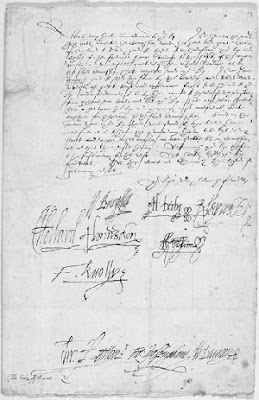 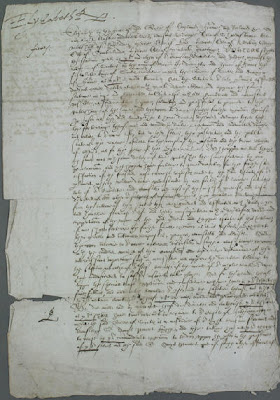 Copy of the execution warrant, dated 1 February 1587, with annotations by Robert Beale, clerk of the Privy Council. This copy was conveyed by Beale to Henry Grey, 6th Earl of Kent, one of the principal Commissioners for the Queen's trial and execution
Lambeth Palace Library, London

Lambeth Palace Library is the historic library of the Archbishops of Canterbury and the principal library and record office for the history of the Church of England.

It holds amongst others, the papers of the earls of Shrewsbury from the 15th century to the death of Gilbert Talbot, 7th earl, in 1616. The earls were influential figures, both locally and nationally, as lord lieutenants and privy councillors.

Most importantly, George, the 6th earl, was for many years custodian of Mary Queen of Scots during her captivity in England. The collection contains hundreds of letters relating to her enforced residence, including details of her household, the costs of maintenance (frequently in arrears), the danger of her escape, plans for surveillance, and relations with Elizabeth

The website of the Library has a section on its papers relating to Mary, Queen of Scots.


Amongst the papers are the originals of the three images above.

‘… then laye shee downe verye quietlye stretchinge out her bodye, & layinge her necke over the blocke, cryed, In manus tuas domine, &c. One of the executioners held downe her hande[s], the other did w[i]th 2 strokes of an axe cut of her head, w[hi]che (falling of her attire) appeared verye graye & near powled [bald] … the blooddye cloathes, the blocke, & what soever els bluddye was burned, in the chimneye fyer …’ (MS 4267, f.28v)

There is also the Earl of Kent’s retained copy of his letter in February 1587 to Queen Elizabeth following his censure for the execution. He protests that the Commissioners for the execution did ‘nothing but according to your Majesties Commission’. (MS 4267, ff.33-34 )

There is also a copy of a speech made in the Star Chamber on 28 May 1587 attacking William Davison, Elizabeth I’s Secretary, for revealing Mary’s death warrant to the Council ‘of his owne head without the privitye or consente of her majesty and contrarye to her commandment …’ (MS 250, f.169) Davison was imprisoned in the Tower by Elizabeth on this account, but later released unharmed.
Posted by Unknown at 10:23 pm