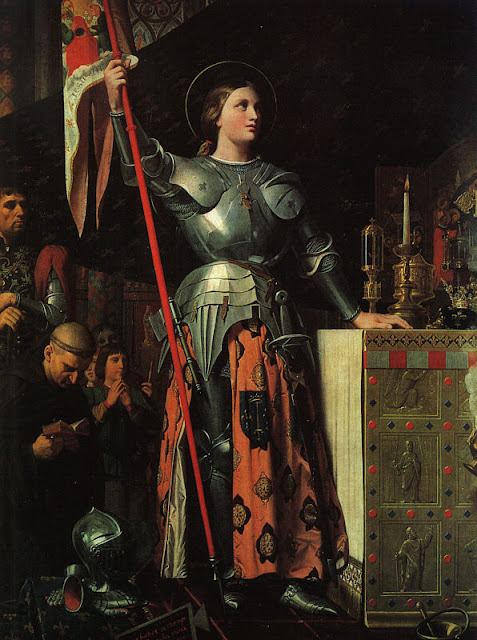 
The painting depicts St Joan at the zenith of her power and her success: July 17th 1429.

After assuming leadership of the French armies and having broken the siege of Orléans, she defeated the English armies at the Battle of Patay (Agincourt in reverse).

She led the French army to Reims recovering French territory on the way (Auxerre and Troyes included). At Reims, the Dauphin was crowned. Paris (in the hands of the English) was within reach. However before Paris could be taken, the Dauphin ordered a retreat.

Betrayed, she was captured by the English and put on trial for heresy. The trial was rigged. She was executed

A posthumous retrial opened after the war ended. The court declared her innocence on July 7, 1456.

No one knows what Joan looked like. She did sit for one painting. Unfortunately, the painting has been lost. In real life, Joan never wore plate armour She has inspired artistic and cultural works for centuries.

Her image grew from the relative obscurity as a minor provincial figure to a much greater one.

Voltaire portrayed her as a sexually alluring stable maid in a quasi-pornographic satire .

Napoleon had a medal struck with Joan on one side and himself on the other.

She became the spirit of France, the maiden, the holy warrior, the Republican and Napoleonic symbol for opposition to the English and for those who would protect France from foreign domination.

Strangely it was not until the nineteenth century that there were determined efforts to have her canonised. Félix Dupanloup, Bishop of Orléans from 1849 to 1878, the ally and friend of Archbishop Darboy of Paris at the First Vatican Council, led the efforts to have her canonised. She appealed to the Gallican sensibility. It was part of the rising nationalism and Catholic revival after the French Revolution.

The Academy of Fine Arts in Orléans commissioned this picture in 1852 for memorial celebrations for Joan of Arc in 1854, during the July Monarchy. Note the presence in the picture of the standard next to the fleur-de-lis, the symbol of the French monarchy. The picture was exhibited in Orléans then and in Paris at the large Ingres retospective at the International Exhibition in 1855.

Included as one of the figures who pay homage to Joan is Ingres himself (in the guise of a royal servant).

On the altar is King Charles VII`s gold crown.

At 74, Ingres was determined to show the triumph of France when Church and State were united.

Joan is cast here as a powerful woman warrior recalling the Roman personification for Fortune and Fortitude, and even personifications of Liberty and the Republic from the French Revolution

As well as triumphalism, there is also a mood of piety in the picture.

The left as well as the right also revered the memory of Joan of Arc. They saw her as one of the people standing up to the clergy and ultimately betrayed by them.

The debate prior to beatification in the Sacred Congregation of Rites was held on 15th November 1903 before Pope Pius X. It was closely fought. The problem was the lack of evidence as to her virtue and also, her behavious of standing up to the clergy at the trial and thereafter. However on 5th January 1904 (the birthday of Joan of Arc) Pope Pius X cut through the academic argument and announced that he was satisfied that Joan`s practice of all the virtues in a heroic degree was established.

She was beatified in 1909, a particularly difficult time for the French Church after the 1905 Law in regard to separation of Church and State.

In the First World War, the saint`s popularity increased. She was a symbol of the struggle to free France from subjugation.