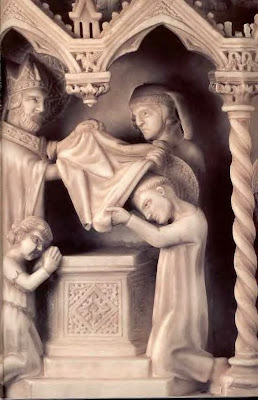 The Baptism of St Augustine in the Arca di Sant' Agostino in the Cathedral of San Pietro in Ciel d'Oro, Pavia

In The Simpsons, Homer is accidentally baptised by Ned Flanders. When Bart asks how Homer feels, he replies: "Oh, Bartholemew, I feel like St. Augustine of Hippo after his conversion by Ambrose of Milan."

Unlike Homer Simpson, the baptism of St Augustine and those who were baptised recently in the Easter Vigil ceremonies were not accidents but the result of free acts of the will.

The baptism by St Ambrose of St Augustine in Milan at the Easter Vigil in 387 was one of the most significant events in the history of the early Church. It was for him an occasion of great joy, the culmination of years of struggle.

While still at Carthage, he had begun to move away from Manichaeism. In Milan, prompted in part by Ambrose's sermons, and partly by his own studies, and the efforts of his mother, St Monica, Augustine renounced Manichaeism. Augustine was always driven by the pursuit of the truth.

In the summer of 386, after having read an account of the life of Saint Anthony of the Desert which greatly inspired him, Augustine underwent a profound personal crisis and decided to convert to Christianity. He abandoned his career, give up any ideas of marriage, and determined to devote himself entirely to serving God.

Key to this conversion was the voice of an unseen child he heard while in his garden in Milan telling him in a sing-song voice to "tolle lege" ("take up and read") the Bible, at which point he opened the Bible at random and fell upon the Epistle to the Romans 13:13, which reads:

"Let us walk honestly, as in the day; not in rioting and drunkenness, not in chambering and wantonness, not in strife and envying".

In the Confessions, St Augustine writes of his conversion and subsequent baptism. He was baptised along with his son, Adeodatus, and his friend, Alypius:

"14. When the time arrived for me to give in my name, we left the country and returned to Milan. Alypius also resolved to be born again in thee at the same time. He was already clothed with the humility that befits thy sacraments, and was so brave a tamer of his body that he would walk the frozen Italian soil with his naked feet, which called for unusual fortitude. We took with us the boy Adeodatus, my son after the flesh, the offspring of my sin. Thou hadst made of him a noble lad. He was barely fifteen years old, but his intelligence excelled that of many grave and learned men.

I confess to thee thy gifts, O Lord my God, creator of all, who hast power to reform our deformities--for there was nothing of me in that boy but the sin. For it was thou who didst inspire us to foster him in thy discipline, and none other--thy gifts I confess to thee. ...

And so we were baptised and the anxiety about our past life left us. Nor did I ever have enough in those days of the wondrous sweetness of meditating on the depth of thy counsels concerning the salvation of the human race. How freely did I weep in thy hymns and canticles; how deeply was I moved by the voices of thy sweet-speaking Church! The voices flowed into my ears; and the truth was poured forth into my heart, where the tide of my devotion overflowed, and my tears ran down, and I was happy in all these things.

15. The church of Milan had only recently begun to employ this mode of consolation and exaltation with all the brethren singing together with great earnestness of voice and heart....

This was the time that the custom began, after the manner of the Eastern Church, that hymns and psalms should be sung, so that the people would not be worn out with the tedium of lamentation. This custom, retained from then till now, has been imitated by many, indeed, by almost all thy congregations throughout the rest of the world.

Thanks to thee, O my God. Whence and whither hast thou led my memory, that I should confess such things as these to thee--for great as they were, I had forgetfully passed them over? And yet at that time, when the sweet savour of thy ointment was so fragrant, I did not run after thee.(1) Therefore, I wept more bitterly as I listened to thy hymns, having so long panted after thee. And now at length I could breathe as much as the space allows in this our straw house(2)."


This month Pope Benedict XVI will be visiting Pavia where the relics of St Augustine are housed in the Arca di Sant' Agostino in the Cathedral of San Pietro in Ciel d'Oro (St Peter in the Golden Sky).

The Arca dates back to 1362. It was made by a follower of the sculptor Giovanni di Balduccio (1275 - 1379). The sculptors and artists were from Campione. The Arca is decorated by some 150 statues and reliefs.

If it looks familiar, then it is due to the influence of the tomb made for a saint, Saint Dominic Guzmýn, founder of the Order of Preachers. That tomb was designed by Nicola Pisano in 1264 and built in San Domenico, Bologna, in 1267.

As can be seen from the addresses and speeches of Pope Benedict, references to St Augustine abound. His doctoral thesis was on St Augustine. There is hardly a speech without at least one reference to the Saint. The address of the Pope before the Arca will be to say the least "interesting". 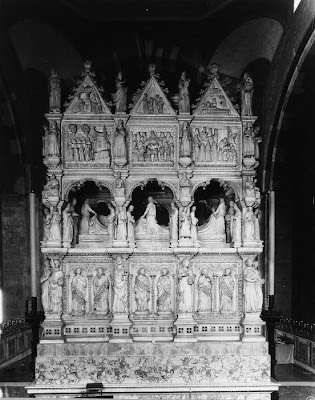 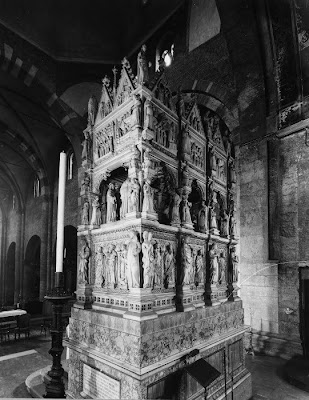 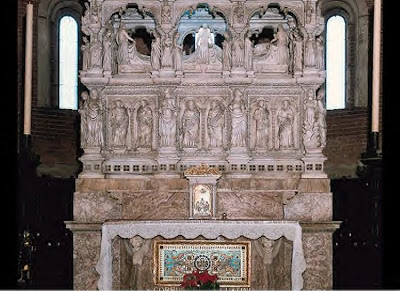 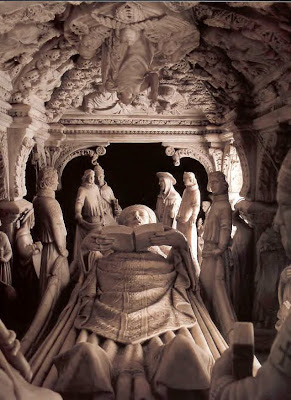 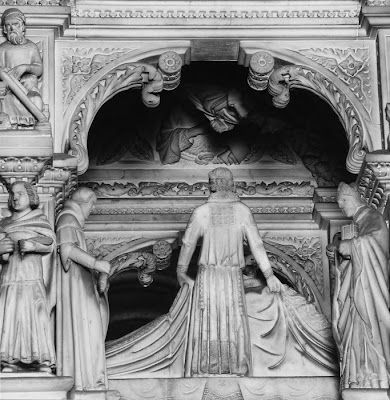 POPE JOHN PAUL II APOSTOLIC LETTER: AUGUSTINUM HIPPONSENSEM
ON THE OCCASION OF THE 16TH CENTENARY OF THE CONVERSION OF ST. AUGUSTINE,
August 28, 1986
http://www.vatican.va/holy_father/john_paul_ii/apost_letters/documents/hf_jp-ii_apl_26081986_augustinum-hipponensem_en.html
Posted by Unknown at 6:11 pm