The Opening of the Fifth Seal (The Vision of St John) 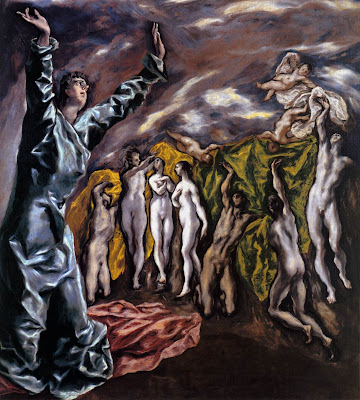 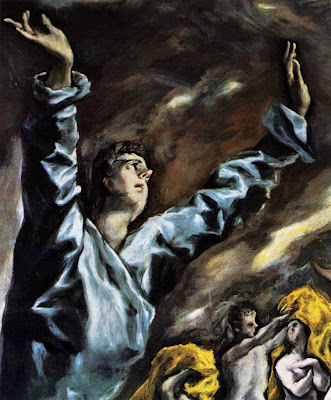 The Opening of the Fifth Seal (The Vision of St John)[detail: of St John]

The work represents a passage from the Revelation of St John.

St John is represented on the extreme left of the picture. He is in rapture and raises his arms in prophesy.

In the passage, the Lamb summons St John to "Come and see" the opening of the Seven Seals.

'And when He had opened the fifth seal, I saw under the altar the souls of them that were slain for the word of God and for the testimony which they held: And they cried with a loud voice, saying ``How long, O Lord, holy and true, does Thou not judge and avenge our blood on them that dwell on the Earth.` And white robes were given to every one of them . . .'
(Revelation of St John, VI, 9-11).

The nude figures are the martyrs who receive the heavenly gift of white robes.

The composition is lop-sided. It adopts the Mannerist approach of over-long figures.

Within the realm of Spanish religious mysticism which flourished at that time, his Mannerist treatment was neither elitist nor unacceptable. In many ways, it is "modern": very much ahead of its time.

The Opening of the Fifth Seal is a large fragment of one of three altarpieces El Greco contracted to paint in 1608 for the church of the Hospital of St John the Baptist (the Tavera Hospital), just outside the walls of Toledo.

This project was El Greco's last large-scale undertaking, and he did not live to complete it.

Email ThisBlogThis!Share to TwitterShare to FacebookShare to Pinterest
Labels: The Opening of the Fifth Seal; (The Vision of St John); Toledo; El Greco