St Catherine of Siena: The Canonisation 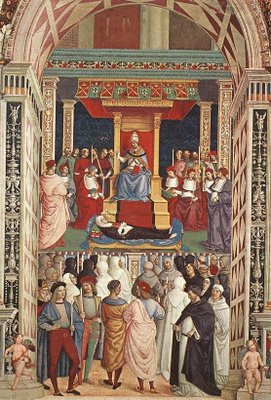 The above picture is part of the fresco cycle in the Piccolomini Library in Siena Cathedral. It shows Pius II canonising St Catherine of Siena. It would appear from its inclusion in the cycle that Pius regarded the canonisation as one of the key moments of his papacy by which he wanted to be remembered.

Without doubt, Pius would have regarded her as a figure of holiness and worthy of being commemorated and venerated. Her life story is extraordinary and remarkable to say the least. For all that she did, she was not a cleric or religious but a lay person. She was a Dominican tertiary.

Briefly, on March 25th, 1347, Catherine, and a twin-sister who dies at once, were born in the Strada dell' Oca, near the fountain of Fontebranda, Siena. She is the youngest of the twenty-five children of Jacopo Benincasa, a dyer, and Lapa, his wife.

Aged 6 years, she had the vision of Christ, arrayed in priestly robes, above the Church of St. Dominic. She is inspired by a longing to imitate the life of the Fathers of the desert, and begins to practise many penances. At the age of seven she makes the vow of virginity. She is drawn to the Order of St. Dominic.

Her ascetic practices met with sharp opposition at home. She was urged to array herself beautifully and to marry, was denied a private chamber, and forced to perform the menial work of the household, etc. In time, however, her perseverance won the consent of her father and family to her desires.

In 1363, she was vested with the black and white habit of Saint Dominic, becoming one of the Mantellate, or Dominican tertiaries, devout women who lived under religious rule in their own homes.

For 3-4 years she led in her own room at home the life of a religious recluse, speaking only to her Confessor. She was absorbed in mystical experiences and religious meditation. During this time she learnt to read. The period closedwith her espousals to Christ, on the last day of Carnival, 1367.

In obedience to the commands of God, she returned gradually to family and social life. She joyfully devoted herself to household labours, and to a life of ministration to the sick and needy.

In 1368 her father died, and the Revolution puts an end to the prosperity of the Benincasa family, which is now broken up. Catherine seems to have retained to the end the care of her mother.

In 1370 she received the command to go abroad into the world to save souls.

Her reputation and influence increased.


A group of disciples gathered around her. Her correspondence gradually becomes extensive, and she became known as a peacemaker. At the same time, her ecstasies and unusual mode of life excited criticism and suspicion.

In May, 1374, she visited Florence, perhaps summoned thither to answer charges made against her by certain in the Order.


She returned to Siena to minister to the plague-stricken. She meets at this time Fra Raimondo of Capua, her Confessor and biographer. Her gradual induction into public affairs was accompanied by growing sorrow over the corruptions of the Church.

In 1375, at the invitation of Pietro Gambacorta, Catherine visited Pisa. Her object was to prevent Pisa and Lucca from joining the League of Tuscan cities against the Pope. She met the Ambassador from the Queen of Cyprus, and zealously undertook to further the cause of a Crusade. On April 1st she received the Stigmata in the Church of Santa Cristina; but the marks, at her request, remained invisible. She prophesied the Great Schism.

In 1376. Catherine received Stefano Maconi as a disciple, and at his instance reconciles the feud between the Maconi and the Tolomei. She attempted by correspondence to reconcile Pope Gregory XI. and the Florentines. On April 1st the Divine Commission to bear the olive to both disputants was given her in a vision. In May, at the request of the Florentines, she went to Florence. Sent as their representative to Avignon, she reached that city on June 18th. Pope Gregory entrusted her with the negotiations for peace. The Florentine ambassadors, however, delayed their coming, and when they came refused to ratify her powers.

Thwarted in this direction, she devoted all her efforts to persuading the Pope to return to Rome, and triumphing over all obstacles, succeeded.

She left for home on September 13th, and she reached Siena in December or January.

In 1377 Catherine converted the castle of Belcaro, conveyed to her by its owner, into a monastery.

She visited the Salimbeni in their feudal castle at Rocca D'Orcia, for the purpose of healing their family feuds.

In 1378, Pope Gregory, in failing health, perhaps regretting his return, became alienated from Catherine. He sent her, however, to Florence. She succeeded in causing the Interdict to be respected, but almost lost her life in a popular tumult.

After the death of Gregory, and the establishment of the longed-for peace by Pope Urban, Catherine returned to Siena, where she devoted herself to composing her "Dialogue."

After the outbreak of the Schism, Urban, whom she had known at Avignon, summoned her to Rome. She reluctantly obeyed , and went there on November 28th, accompanied by a large group of disciples, her "Famiglia," who live together, subsisting on alms.

From this time Catherine devoted her whole powers to the cause of Urban. She was his trusted adviser, and tried earnestly to curb his impatient temper on the one hand, and to keep the sovereigns of Europe faithful to him on the other. She wrote on his behalf to the Kings of France and Hungary, to Queen Giovanna of Naples, to the magistrates of Italian cities, to the Italian cardinals who have joined the Schism, and to others.

Fra Raimondo, despatched to France, to her grief and exaltation, delayed his mission through timidity, to her bitter disappointment, but did not return to Rome till after her death. Catherine's health, always fragile, gave way.

In 1380, Catherine succeeded in quieting the revolt of the Romans against Urban. She dedicated herself as a sacrificial victim, in expiation of the sins of the Church and of the Roman people. In vision at St. Peter's, on Sexagesima Sunday, the burden of the Ship of the Church descended upon her shoulders. Her physical sufferings increase, and on April 30th she died, in the presence of her disciples.

Pope Paul VI bestowed on her in 1970 the title of Doctor of the Church - making her the first woman, along with Saint Teresa of Ávila, ever to receive this honor.

In 1999 Pope John Paul II made her one of Europe's patron saints.

Her body is currently interred in Santa Maria sopra Minerva, Rome. However her head and right thumb are preserved in San Domenico, Siena.

As a member of a Sienese family and as a former Bishop of Siena, he would have been long aware of her life and the devotion of the Sienese people to her. He must have shared in this devotion. No doubt that there was an element of local patriotism in the decision to canonise her.

The decision to canonise her came after Pius II deposed Martial Auribelli (1453-1462), the General of the Dominicans. The reasons that motivated Pius are nowhere to be found, but Auribelli's first encyclical after he returned to office in 1465, after Pius died, strongly hints at injustice. Strained relations between Auribelli and the reformed Congregation of Lombardy seem to have been an important factor. It was more disagreement than injustice. Auribelli defended his rights vigorously, whereas the Congregation was moving toward semi-independence, gaining all it wanted from Pius II in 1459. Auribelli was not an enthusiastic reformer but he supported reform and had granted important privileges to the Lombards.

While Italy was torn by civil strife and the Church was subject to corruption and political interests, the work of the Saint had three major objectives: the pacification of the Italian cities, the reform of the Church and the return of the Pope to Rome from Avignon.

A major plank of Pius`s policy was to restore peace among the warring cities and Europe to face the common external aggressor to then Christendom.

Catherine`s vision of reform of the Church was reform through a strong and centralised Papacy. Now that Pius had abandoned Conciliarism, this theme was supported strongly by Pius.

The centrality of the Pope based in Rome and not elsewhere was strongly supported by Pius. Indeed it was one of the arguments which in his Commentaries, he said that he had used with Cardinal Borgia when he needed his support in the conclave which elected him Pope.

The influence of Saint Catherine of Siena is still strong at the present. This can be seen from the following:


LECTURE BY PROFESSOR MARIA ANTONIETTA FALCHI PELLEGRINI
St. CATHERINE and the Priests: A MESSAGE for THE CHURCH OF THE THIRD MILLENNIUM 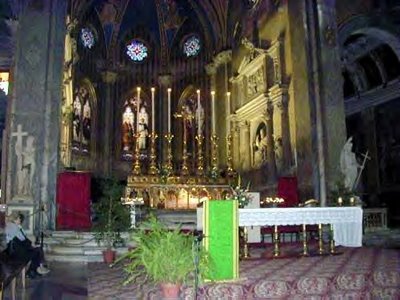 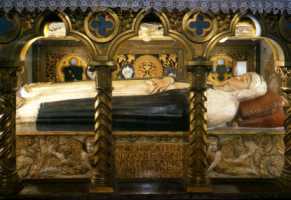 The above two pictures show the tomb of St Catherine in Santa Maria sopra Minerva, Rome 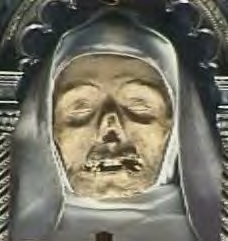 Head of Saint Catherine in Siena
Posted by Unknown at 10:01 am