The Nativity of St Luke

The angel unfurls a banner with the Good News:

The infant lies on the bare ground adored by one and all, Here we see the Flemish influence of Hugo van der Groes

The infant lies on a bundle of grain. He is to be the new bread of the Eucharist

Christ is priest as well as sacrifice

In the foreground are the anemone and cyclamen: flowers that symbolise the passion of Christ

On one side the angel gives the  news to the shepherds.

In the foreground, the central image: the Holy Family by their hut or stable with the animals  accompanied by Saints Lawrence and Andrew who will follow Christ into martyrdom

The animals are an ox and an ass

And in New York (see below)  is a similar but smaller work by Romano which was meant to be the central panel of a three-part predella that originally included the Feast of Herod (Gemäldegalerie, SMPK, Berlin; no. S 4, 29 x 45 cm) and Saint Jerome Healing the Lion's Foot (Ca' d'Oro, Venice; no. 118, 29 x 45 cm). The centre altarpiece would have been a Madonna and Child


There are of course some differences:

Only the parents are shown in adoration

As befits one of the three founders of the Compagnia di San Luca, the guild of painters in Rome, the narrative of the Nativity is firmly based on the Gospel of St Luke, probably the most repeated narrative of the Birth of Our Lord and the one best known

Even after nearly two thousand years, the story never fails to surprise and inspire

Here we see the statutes of the Company of St Luke being presented to St Luke, who is accompanied by his "symbol", the ox, the sacrificial animal of the Old Testament and one of the animals traditionally depicted at the crib of Our Lord 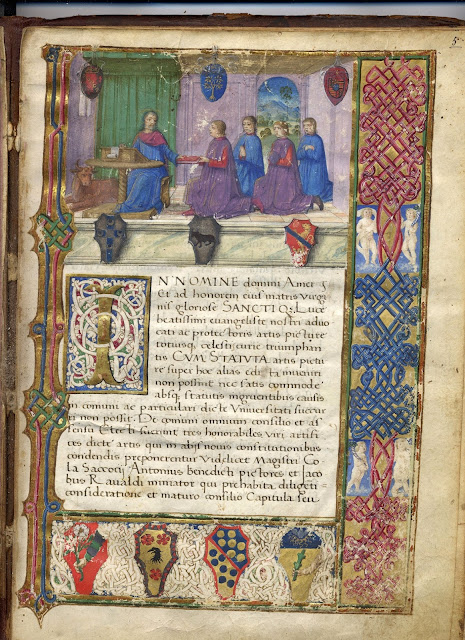