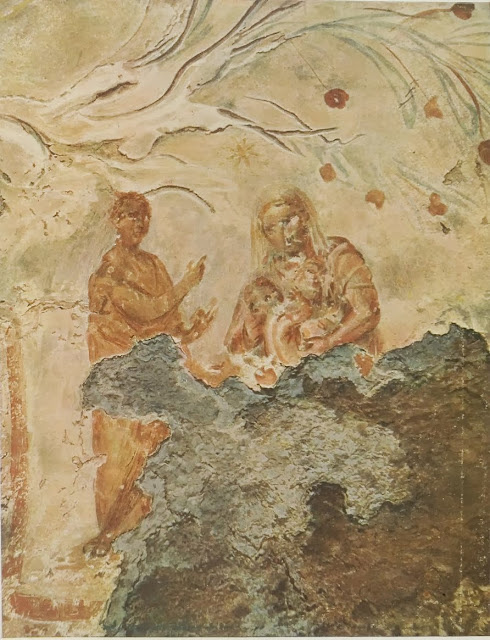 
Last month The Queen of the Catacombs, the Catacombs of Priscilla, on Rome`s Via Salaria reopened after a five year closure due to restoration

It is regarded as the earliest known depiction of Mary, the Blessed Virgin.

That is because he is pointing to a star and that the reference is to the prophecy of Balaam in Numbers 24  and in particular verses  15 - 17:

"“A star shall rise out of Jacob, and a sceptre shall spring up from Israel”

The identification of Balaam is fraught with difficulty

In the New Testament, Balaam is vilified as an avaricious man who through bribery curses Israel

In Revelation 2:14  we read of false teachers at Pergamum who held the "teaching of Balaam, who taught Balak to cast a stumbling-block before the children of Israel, to eat things sacrificed to idols, and to commit fornication."

In both 2 Peter 2:15 and in Jude 1:11,  Balaam is cited as an example of a false prophet motivated by greed or avarice.

"1 When Jesus was born in Bethlehem of Judea, in the days of King Herod, behold, magi from the east arrived in Jerusalem,
2 saying, “Where is the new born king of the Jews? We saw his star at its rising and have come to do him homage. ...

9 After their audience with the king they set out. And behold, the star that they had seen at its rising preceded them, until it came and stopped over the place where the child was.
10 They were overjoyed at seeing the star,
11 and on entering the house they saw the child with Mary his mother. They prostrated themselves and did him homage. Then they opened their treasures and offered him gifts of gold, frankincense, and myrrh."

The star could also be a reference to the Star of David known in Hebrew as the Shield of David or Magen David. The term "Shield of David" is also used in the Siddur (Jewish prayer book) as a title of the God of Israel.

In Europe many medieval cathedrals and churches display the Star of David: notably those in Burgos and Valencia Spain; Florence Anagni Aquileia and Orvieto Italy; and Brandenburg Stendal and Hannover Germany

Revelation (12:1, 2 & 5) describes the Woman of the Apocalypse: And there appeared a great wonder in heaven; a woman clothed with the sun, and the moon under her feet, and upon her head a crown of twelve stars

Email ThisBlogThis!Share to TwitterShare to FacebookShare to Pinterest
Labels: Cardinal Gianfranco Ravasi, Catacomb of Priscilla, Isaiah 9, prophecy of Balaam, Rome, Shield of David, Star of David, Star of the Sea, Woman of the Apocalypse