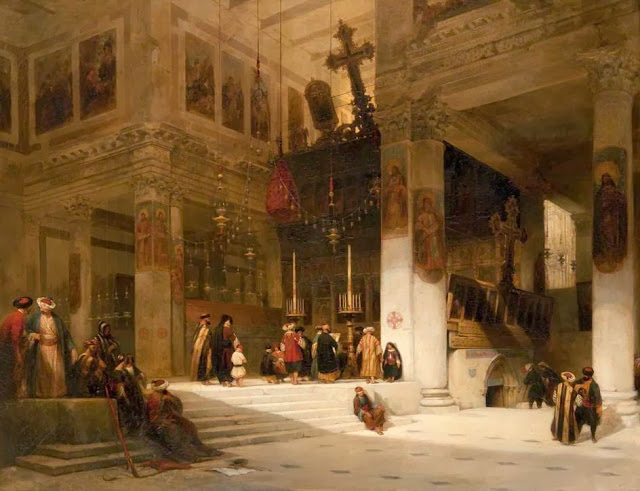 
The Scottish artist David Roberts made his first visit to the Middle East in 1838-9, which resulted in his best known work, a set of 247 coloured lithographs of The Holy Land, Syria, Idumea, Arabia, Egypt & Nubia, published 1842-1849.

He was one of the first independent and professional British artists to experience the Orient at first hand.

On 6th April 1839, he visited the Church of the Nativity in Bethlehem. He wrote in his journal:

""While I was sketching the Church of the Nativity, a man arrived from Jerusalem with the sacred fire which the priests say comes from heaven; and the whole of the Arab Christians turned out to receive him, carrying banners and headed by their priests." 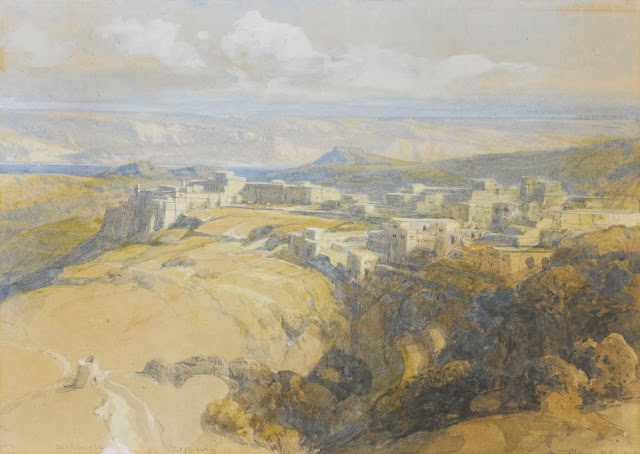 David Roberts 1796 - 1864
Bethlehem: Looking towards the Dead Sea
1839
Watercolour over pencil
235 by 336 mm
Private collection
(Inscription on the left hand side: Site of the house of Jesu Convent of The Nativity; further inscribed upper left: Mountains of Moab; and upper centre: The Franks Hills)

One hundred and sixty years after Roberts visited Bethlehem and the Basilica, another pilgrim came: Blessed Pope John Paul II on 22 March 2000

In his homily there he described his visit to Bethlehem ("The House of Bread")  as "the heart of my Jubilee Pilgrimage. The paths that I have taken lead me to this place and to the mystery that it proclaims."

"In the cave of Bethlehem, to use the words of Saint Paul in today’s Second Reading, “God’s grace has been revealed” (Titus 2:11). In the Child who is born, the world has received “the mercy promised to our fathers, to Abraham and his descendants for ever” (cf. Lk 1:54-55).

Dazzled by the mystery of the Eternal Word made flesh, we leave all fear behind and we become like the angels, glorifying God who gives the world such gifts. With the heavenly choir, we “sing a new song” (Ps 96:1):

“Glory to God in the highest heaven,
and peace on earth to those whom he loves” (Lk 2:14)"

Email ThisBlogThis!Share to TwitterShare to FacebookShare to Pinterest
Labels: Bethlehem: Looking towards the Dead Sea, Church of the Nativity, David Roberts, he House of Bread, Jubilee Pilgrimage