St Bernard and the Virgin Mary 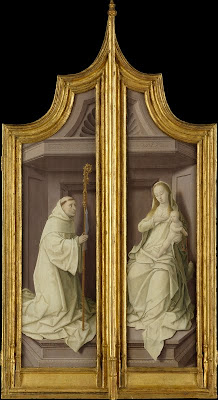 The work was commissioned by Jeanne de Boubais, abbess of the Cistercian convent of Flines which at the time was undergoing a period of reform.

The work was found in 1861 found in the farmhouse of Le Cellier, former granary of the abbey of Clairvaux, Colombe-le-Sec, Champaigne

The work portrays two figures, one on each wing, which together portray the Miracle of the Lactation in which a stream of milk is propelled from the Virgin Mary's bared breast to the lips of Saint Bernard. This story was the most famous of the legendary tales that grew up around Saint Bernard of Clairvaux

In the 17th century Bellegambe was known as ‘the Master of Colours’.

The devotion of St Bernard of Clairvaux to the Virgin Mary is well known.

Here are some pithy sayings from his writings on Mary:

"Take away this star of the sun which illuminates the world: where does the day go? Take away Mary, this star of the sea, of the great and boundless sea: what is left but a vast obscurity and the shadow of death and deepest darkness?"
In Navitate B. Mariae Sermo-De aquaeductu, 6
Posted by Unknown at 9:15 pm