The Death of St Jerome 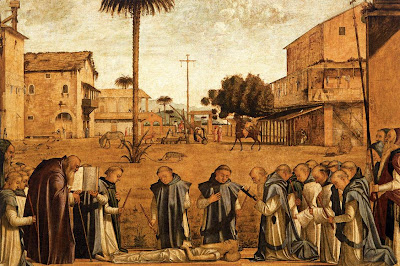 "65. Hence was Jerome wondrously uplifted to love for and knowledge of Christ through his study of the Bible in which he discovered the precious pearl of the Gospel:

"There is one most priceless pearl: the knowledge of the Saviour, the mystery of His Passion, the secret of His Resurrection." (In Matt., 13:45)

Burning as he did with the love of Christ we cannot but marvel that he, poor and lowly with Christ, with soul freed from earthly cares, sought Christ alone, by His spirit was he led, with Him he lived in closest intimacy, by imitating Him he would bear about the image of His sufferings in himself. For him nought more glorious than to suffer with and for Christ. Hence it was that when on [Pope] Damasus' death he, wounded and weary from evil men's assaults, left Rome and wrote just before he embarked:

"Though some fancy me a scoundrel and guilty of every crime - and, indeed, this is a small matter when I think of my sins - yet you do well when from your soul you reckon evil men good. Thank God I am deemed worthy to be hated by the world. . . What real sorrows have I to bear - I who fight for the Cross? Men heap false accusations on me; yet I know that through ill report and good report we win the kingdom of heaven." (Epist. ad Asellam, 45, 1, 6.)

66. In like fashion does he exhort the maiden Eustochium to courageous and lifelong toil for Christ's sake:

"To become what the Martyrs, the Apostles, what even Christ Himself was, means immense labour - but what a reward! . . . What I have been saying to you will sound hard to one who does not love Christ. But those who consider worldly pomp a mere offscouring and all under the sun mere nothingness if only they may win Christ, those who are dead with Christ, have risen with Him and have crucified the flesh with its vices and concupiscences - they will echo the words: "Who shall separate us from the charity of Christ?" (Epist. ad Eustochium, 22, 38)"