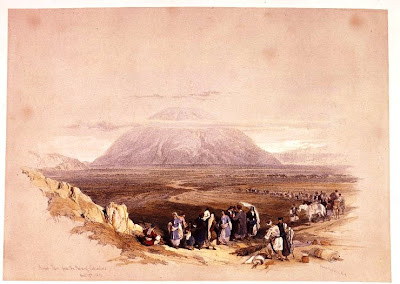 Like his predecessor Pope Pius XI, Pope John Paul II had a well known love of and strong fascination with mountain peaks

In this homily by Cardinal Martins at Church of San Pietro della Jenca in L'Aquila (Abruzzi region) on Wednesday, 18 May 2005, the Cardinal reflects on this.

The homily was given to mark the naming of a mountain after Pope John Paul II on what would have been his 85th Birthday.

In the homily, the Cardinal also reflects on the fact that Jesus lived much of his life against a backdrop of mountains.

"We also know well that Jesus lived much of his life against a backdrop of mountains. The Gospels frequently speak of Jesus "going out to the mountain".

Before choosing the Twelve, he spent the night alone on the mountain (Lk 6: 12-13). And after the multiplication of the loaves, Jesus dismissed the crowd and "went up on the mountain by himself to pray, remaining there alone as evening drew on" (Mt 14: 23-24).

At the same time, we must mention Mount Tabor, the mountain of the Transfiguration (cf. Lk 9: 28-29), and the mountain that was featured in the last week of Christ's earthly life, most of which he lived against the background of mountain scenery: the Mount of Olives.

Lastly, there is one other mountain among the many others that we are unable to list, a paschal mountain: the mountain in Galilee whose name is not given in the Gospels; it was there that the last solemn apparition of the Risen and Glorified Christ occurred. Indeed, at the end of his Gospel, Matthew recalls that "the eleven disciples made their way to Galilee, to the mountain to which Jesus had summoned them" (Mt 28: 16), and it was there, on that mountain, that the epilogue of the earthly life of the Risen One was played out. ...

However, before entering into the lofty and memorable significance of this day, I would like first to mention one other point: the presence of the mountain in the iconography of all times.

It suffices, to give just one example, to mention Leonardo da Vinci's Virgin of the Rocks. John Ruskin, the art critic, observes in his vast work on modern painting that "there has always been an idea of holiness" in art, "connected with rocky solitude, for it was on mountain peaks that the divinity would speak most intimately to human beings, and it was always to the mountains that the saints withdrew for meditation and special communion with God".

Moreover, there is no need to teach this to you who know it well, given the history of St Celestine V and the important role he played in his unusual spiritual journey in your fascinating Abruzzi Mountains.

So it is that the mountain, even before any consideration of its physical height, is a spiritual symbol."
Posted by Unknown at 6:17 pm