Paying Homage to the Emperor 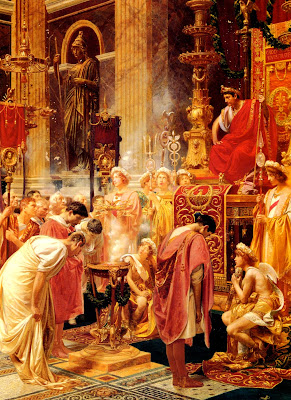 Flavius Claudius Julianus (known as Julian the Apostate) (AD331/332 - 363) became sole emperor in 361.
He attempted to reverse the Christianisation of the Roman Empire inaugurated by Constantine. He favoured reinstituting the pagan system.
He had a deep love of Hellenic culture and a passionate hatred of the "Galileans", as he dubbed Christians.
His restoration of paganism was intended to restore the lost strength of the Roman State
His intention was to create a society in which every aspect of the life of the citizens was to be connected, through layers of intermediate levels, to the figure of the Emperor - the final provider for all the needs of his people. Within this project, there was no place for a parallel institution, such as the Christian hierarchy or Christian charity
Amongst other facets of Christianity which  he had in his sights was Christian charity.
Pope Benedict XVI referred to this in his Encyclical Deus Caritas Est:

"A mention of the emperor Julian the Apostate († 363) can also show how essential the early Church considered the organized practice of charity. As a child of six years, Julian witnessed the assassination of his father, brother and other family members by the guards of the imperial palace; rightly or wrongly, he blamed this brutal act on the Emperor Constantius, who passed himself off as an outstanding Christian. The Christian faith was thus definitively discredited in his eyes.

Upon becoming emperor, Julian decided to restore paganism, the ancient Roman religion, while reforming it in the hope of making it the driving force behind the empire. In this project he was amply inspired by Christianity. He established a hierarchy of metropolitans and priests who were to foster love of God and neighbour. In one of his letters, he wrote that the sole aspect of Christianity which had impressed him was the Church's charitable activity. He thus considered it essential for his new pagan religion that, alongside the system of the Church's charity, an equivalent activity of its own be established.

According to him, this was the reason for the popularity of the “Galileans”. They needed now to be imitated and outdone. In this way, then, the Emperor confirmed that charity was a decisive feature of the Christian community, the Church. ...

[But f]or the Church, charity is not a kind of welfare activity which could equally well be left to others, but is a part of her nature, an indispensable expression of her very being. ...

The increase in diversified organizations engaged in meeting various human needs is ultimately due to the fact that the command of love of neighbour is inscribed by the Creator in man's very nature. It is also a result of the presence of Christianity in the world, since Christianity constantly revives and acts out this imperative, so often profoundly obscured in the course of time.

The reform of paganism attempted by the emperor Julian the Apostate is only an initial example of this effect; here we see how the power of Christianity spread well beyond the frontiers of the Christian faith. For this reason, it is very important that the Church's charitable activity maintains all of its splendour and does not become just another form of social assistance."

Some historians have commented that in the pre-Christian world, there was absent love-motivated charity. There was civic private philanthropy: the provision of public baths, games, buildings. But the motivation was not love. It was policy.
The cynical and cold nature of Julian the Apostate`s enterprise can be seen in this extract from Letter to Arsacius. What he planned was cold charity, crabbed and iced in the name of a calculating and power hungry Emperor:

"The religion of the Greeks does not yet prosper as I would wish, on account of those who profess it.

Why then do we think that this is sufficient and do not observe how the kindness of Christians to strangers, their care for the burial of their dead, and the sobriety of their lifestyle has done the most to advance their cause?

Each of these things, I think, ought really to be practiced by us. It is not sufficient for you alone to practice them, but so must all the priests in Galatia [in modern Turkey] without exception. Either make these men good by shaming them, persuade them to become so or fire them . . .

Secondly, exhort the priests neither to approach a theater nor to drink in a tavern, nor to profess any base or infamous trade. Honor those who obey and expel those who disobey.

Erect many hostels, one in each city, in order that strangers may enjoy my kindness, not only those of our own faith but also of others whosoever is in want of money. I have just been devising a plan by which you will be able to get supplies. For I have ordered that every year throughout all Galatia 30,000 modii of grain and 60,000 pints of wine shall be provided. The fifth part of these I order to be expended on the poor who serve the priests, and the rest must be distributed from me to strangers and beggars. For it is disgraceful when no Jew is a beggar and the impious Galileans [the name given by Julian to Christians] support our poor in addition to their own; everyone is able to see that our coreligionists are in want of aid from us.

While proper behavior in accordance with the laws of the city will obviously be the concern of the governors of the cities, you for your part [as a priest] must take care to encourage people not to violate the laws of the gods since they are holy . . . Above all you must exercise philanthropy. From it result many other goods, and indeed that which is the greatest blessing of all, the goodwill of the gods . . .

We ought to share our goods with all men, but most of all with the respectable, the helpless, and the poor, so that they have at least the essentials of life. I claim, even though it may seem paradoxical, that it is a holy deed to share our clothes and food with the wicked: we give, not to their moral character but to their human character. Therefore I believe that even prisoners deserve the same kind of care. This type of kindness will not interfere with the process of justice, for among the many imprisoned and awaiting trial some will be found guilty, some innocent. It would be cruel indeed if out of consideration for the innocent we should not allow some pity for the guilty, or on account of the guilty we should behave without mercy and humanity to those who have done no wrong . . . How can the man who, while worshipping Zeus the God of Companions, sees his neighbors in need and does not give them a dime--how can he think he is worshipping Zeus properly? . . .

Priests ought to make a point of not doing impure or shameful deeds or saying words or hearing talk of this type. We must therefore get rid of all offensive jokes and licentious associations. What I mean is this: no priest is to read Archilochus or Hipponax or anyone else who writes poetry as they do. They should stay away from the same kind of stuff in Old Comedy. Philosophy alone is appropriate for us priests. Of the philosophers, however, only those who put the gods before them as guides of their intellectual life are acceptable, like Pythagoras, Plato, Aristotle, and the Stoics . . . only those who make people reverent . . . not the works of Pyrrho and Epicurus . . . We ought to pray often to the gods in private and in public, about three times a day, but if not that often, at least in the morning and at night.

No priest is anywhere to attend shameful theatrical shows or to have one performed at his own house; it is in no way appropriate. Indeed, if it were possible to get rid of such shows altogether from the theater and restore the theaters, purified, to Dionysus as in the olden days, I would certainly have tried to bring this about. But since I thought that this was out of the question, and even if possible would for other reasons be inexpedient, I did not even try. But I do insist that priests stay away from the licentiousness of the theaters and leave them to the people. No priest is to enter a theater, have an actor or a chariot driver as a friend, or allow a dancer or mime into his house. I allow to attend the sacred games those who want to, that is, they may attend only those games from which women are forbidden to attend not only as participants but even as spectators."

Translation of Edward J. Chinnock, A Few Notes on Julian and a Translation of His Public Letters (London: David Nutt, 1901) pp. 75-78