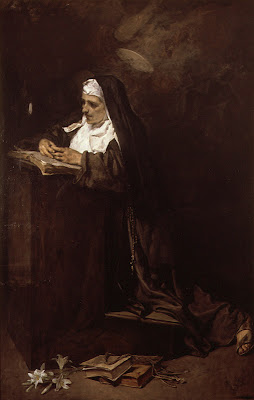 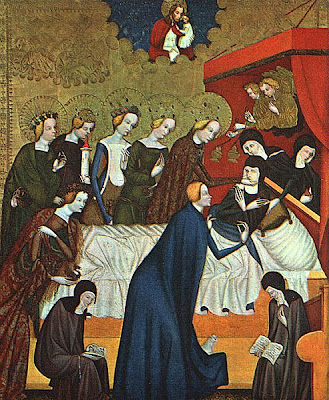 In 1214 Pope Innocent III granted the Privilege of Holy Poverty to St. Clare in the Rescript "Sicut manifestum". This was confirmed by Pope Gregory IX in the Bull "Sicut Manifestum Est" of September 17, 1228 granted to St Clare and the Poor Clares of Assisi.

In his Letter to mark the Eighth Centenary of the Birth of St Clare of Assisi (11th August 1993), Pope John Paul II said:

"4. If Catherine of Siena is the saintly woman full of passion for the Blood of Christ, the great St Teresa is the woman who goes from "mansion" to "mansion" to the threshold of the great King in the Interior Castle and Therese of the Child Jesus is the one who, in Gospel simplicity, travels the little way, Clare is the passionate lover of the poor, crucified Christ, with whom she wants to identify absolutely.

She puts it thus in one of her letters: "Look upon him who became contemptible for you, and follow him, making yourself contemptible in this world for him. Your Spouse, though more beautiful than the children of men, became for your salvation the lowest of men, was despised, struck, scourged untold times throughout his entire body, and then died amid the suffering of the cross.... Gaze upon him, consider him, contemplate him, as you desire to imitate him. If you suffer with him, you shall rejoice with him; if you die with him on the cross of tribulation, you shall possess heavenly mansions in the splendour of the saints, and in the Book of Life your name shall be called glorious among men" (2LAg 19-22)."

In the first painting above, Santa Clara, which was painted by Marqués in Rome in 1869, resulted in the painter receiving the first prize medal in the National Exhibition in 1871

The second painting depicts the vision of the death of Saint Clare as experienced by one of her followers, Sister Benvenuta of Diambra.

The vision happened while the saint`s followers stood vigil around her deathbed in 1253. The Virgin cradles the dying nun's head as a group of female saints, Clare's sister Agnes, and members of her order stand by. Above the gold field that separates earth from heaven, Jesus holds a representation of Clare's soul as a white-clad child

Originally this painting would have been for the Convent of the Poor Clares, Eger (Cheb), Bohemia (now Czechoslovakia), or Eger (Erlau). Hungary.